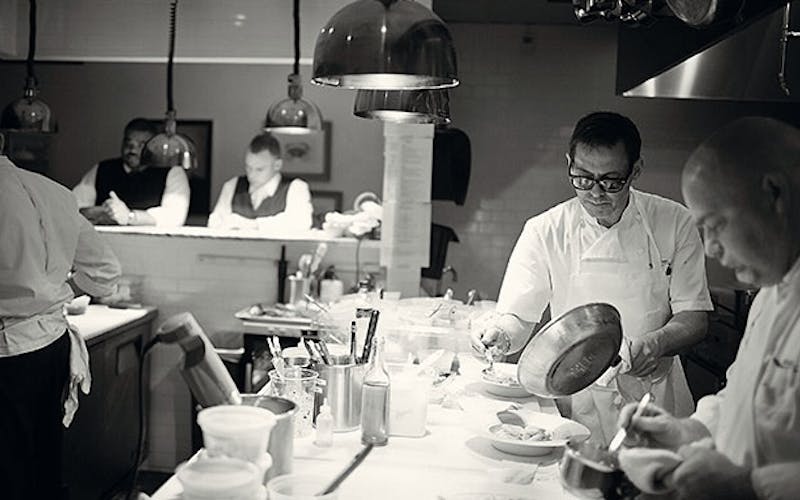 A few months after he opened Spoon Bar & Kitchen, at the end of 2012, chef John Tesar said wistfully to me, “When people in Dallas think of seafood restaurants, I want Spoon to be on the list.” He has his wish. Not only is Spoon a hit in Dallas, it’s got a growing fan base in the rest of the state and beyond. In few other places is the bounty of the sea more pristine or prepared with more imagination and care. This is the best new restaurant in Texas.

Dinner at Spoon, with its companionable front-room bar, is likely to start dramatically, when your waiter delivers a glass-covered dish bearing a tidy rectangle of fantastic smoked-sturgeon headcheese, with horseradish crème fraîche, a dab of chive gel, and black sturgeon caviar. When the lid is lifted, a puff of smoke—a.k.a. Texas perfume—wafts your way. And this is just the amuse-bouche, people! The crudos, which must not be skipped, have some of the menu’s most exciting and unexpected combinations of flavors. Filmy ribbons of cuttlefish are brilliantly tossed with pink peppercorns, jalapeño oil, and yuzu. Wild-caught king salmon, on a striking black platter, is set off by trout roe and rosy roasted beets for an emphatic, rootsy taste profile. But the most seductive starter is the live diver scallop lavished with brown butter, gently warmed in a seafood dashi broth, and crowned with a small fortune in Perigord truffles. This was the most amazing thing I’ve eaten in years, if not decades. It may cause you to swoon, but try to maintain your composure long enough to get to the entrées. You wouldn’t want to miss the shimmering arctic char with its crisp, heavenly skin and garnish of pickled hon shimeji mushrooms and lotus root, or the classic skate wing with capers and Maine mussels, or the filet of swordfish underscored by a grass-green parsley purée and basking in a sassy vinaigrette of tomatoes and picholine olives. Desserts, from pastry chef David Collier, keep pace with the seafood, one of the most fun being the deconstructed s’mores, a tour de force involving chocolate panna cotta and toasty brûléed marshmallow cream.

If you can, snag one of the three-sided, sea foam–blue booths or a counter seat, where you can watch your order being cooked and meticulously plated. The mood is not really formal, but the service is too smart to be called casual. Spoon keeps things comfortable in spite of its high-style menu. Opened November 7, 2012. 8220 Westchester Dr (214-368-8220). L Tue–Fri. D Tue–Sun. $$$