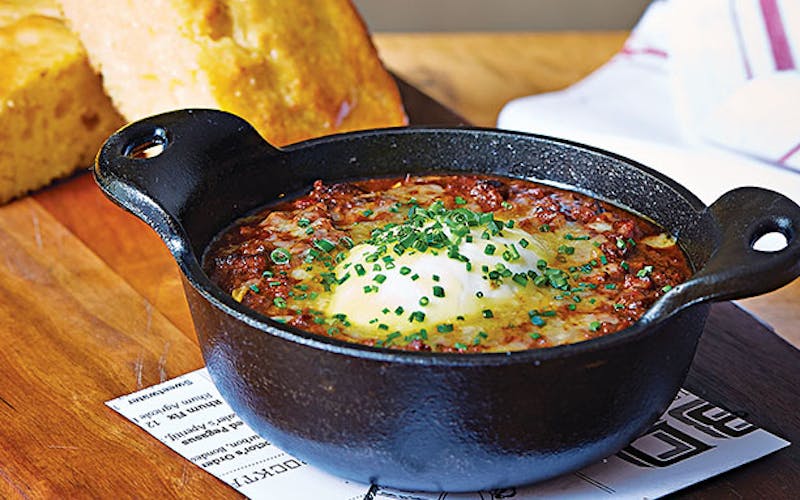 There is a down-the-rabbit-hole aspect to CBD Provisions. If you step from the arty, modern Joule Hotel lobby into this cleverly designed dining room, you may think you’ve wandered into a secret chamber that was boarded up decades ago and only recently rediscovered. Dish-towel napkins, old buff-brick walls, and reclaimed-wood floors speak to farmhouse aesthetics. They also reinforce the “Texas brasserie” menu, executed with flair by 33-year-old executive chef Michael Sindoni, who observes the first rule of restaurants: Know thy audience. Sindoni’s food is grounded in Southwestern classics, like a fantastic take on menudo fashioned from a combo of homemade chorizo and astonishingly unfunky minced braised tripe. The red chili and cornbread (above) would pass muster at a tailgate party. Sindoni also keeps it local with the likes of crispy-skinned Gulf snapper and roasted fennel. But that doesn’t mean he can’t throw in some exotic touches, such as an out-of-the-ordinary tabbouleh of quinoa and farro. During the fall and winter, he baked persimmons (think sweet potatoes crossed with mangos) and paired them with pan-roasted Bandera quail. The approachable menu, coupled with a great cocktail program in the adjoining bar, has Dallas diners doing the unheard-of: going downtown for dinner. Opened October 10, 2013. 1530 Main (214-261-4500). B, L & D 7 days. $$$