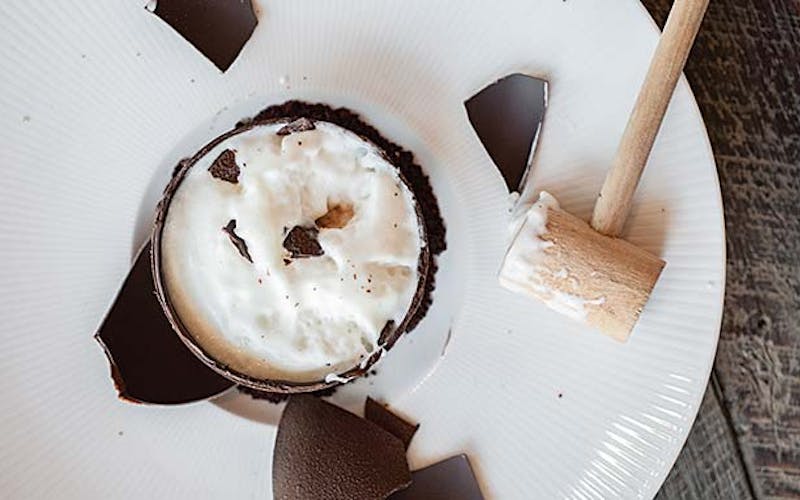 The air crackles at Caracol. You feel the energy as you walk past the hopping terrace and check in with the host. You sense it as a palpable force that caroms from the entry to the kitchen and back, filling every nook and cranny of the restaurant’s spacious white dining rooms, which are decked out in playful aquatic art. This place is happening. At any other restaurant, so much excitement could quickly devolve into chaos. Not here. Even when you’re standing three deep at the bar, things stay under control as the barkeeper gives you reassuring updates: “Four people ahead of you . . . What do you want? . . . Here you go!” And with that, an icy paloma is placed in your waiting hand.

It was just before Christmas 2013 when chef Hugo Ortega and restaurateur Tracy Vaught opened their second interior Mexican restaurant in Houston, after Hugo’s. The enterprise must have seemed like a gamble to the husband-and-wife team. After all, it was a large space at an expensive Galleria-area address far from their familiar neighborhood. But as it turned out, there was no reason to fret. Their reputation and fan base spanned the entire city.

Having enticed Houston with his brand of creative indigenous cuisine at Hugo’s for a dozen years, Ortega, age fifty, here applies the same philosophy to dishes like fat wood-roasted Gulf oysters, which emerge briny-fresh under a mantle of bread crumbs and chipotle butter. He knows how to craft the tart red sauce of a well-chilled campechana so that it will appeal to Houstonians but retain its Mexican bona fides. In Caracol’s busy kitchen, he gets his ducks in a row and onto a plate in the form of duck breast in red pipián, a rich chile-and-pumpkin-seed sauce. He once even modernized Mexico’s legendary monster tamal, the zacahuil; the result was a bowl of tidy banana leaf packets of rustic masa and seafood in a robust red mole. And, wisely, he has given his pastry chef, brother Ruben Ortega, free rein to construct sweets like the exotic chocolate coconut and the flan de olla, cinnamon-coffee custard under a jaunty cap of candied kumquats. Hugo, Tracy, and Ruben long ago won the hearts, minds, and stomachs of Houston diners with Hugo’s. They have done it again, with passion and panache, at Caracol, my choice for restaurant of the year.