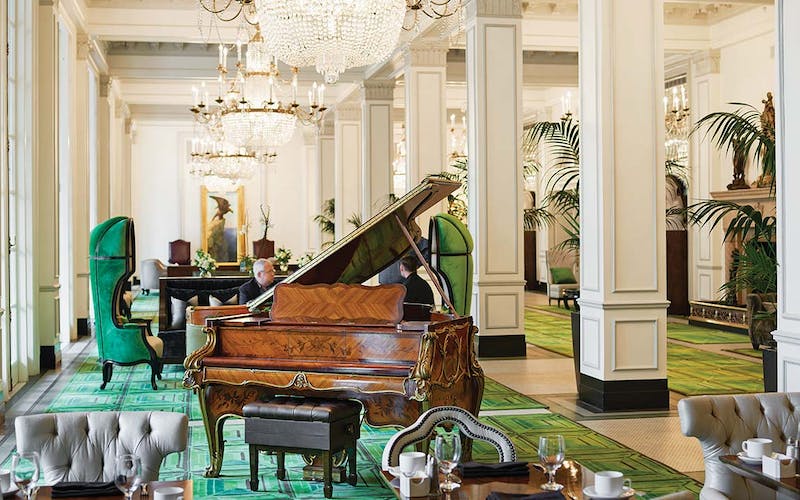 “Absolutely fireproof” read the ad announcing the opening of San Antonio’s St. Anthony Hotel in February 1909. “#Texas JewelReborn” read the hashtag announcing its reopening last fall after a multimillion-dollar overhaul. Luckily the update was triggered not by a great conflagration but by new owners, who’ve returned the hotel to its former glory. Despite several good decades that saw dozens of A-list guests (John Wayne took up residence while filming The Alamo) and a host of headline-making soirees (Grace Kelly turned heads when she attended a fashion show), the ten-story icon had grown more shabby than chic until a local company bought it in 2012.

Thirty months of tweaks later, the St. Anthony—located just blocks from the Alamo—is once again a black-tie affair. As I strolled across the lobby’s original Calacatta marble floors and caught sight of my road-weary self in one of the many gilded mirrors, I felt a little underdressed. That didn’t stop me from commandeering one of the velvet-domed chairs in Peacock Alley, the grand parlor where crystal chandeliers dangle above plush emerald carpets, or sitting a spell in the revamped St. Anthony Club. Spiffing up a bit did feel required, however, for dinner at the new Rebelle restaurant and drinks at the glitzy Haunt Lounge. In the morning, I wandered up to the Sky Terrace, a rooftop perch that echoes the Spanish Colonial architecture of San Antonio’s missions and is steadily booked for parties and events. And just like that, St. Anthony’s dance card is filled once again. Renovated 2013­–2015; 277 rooms; starting at $239; thestanthonyhotel.com