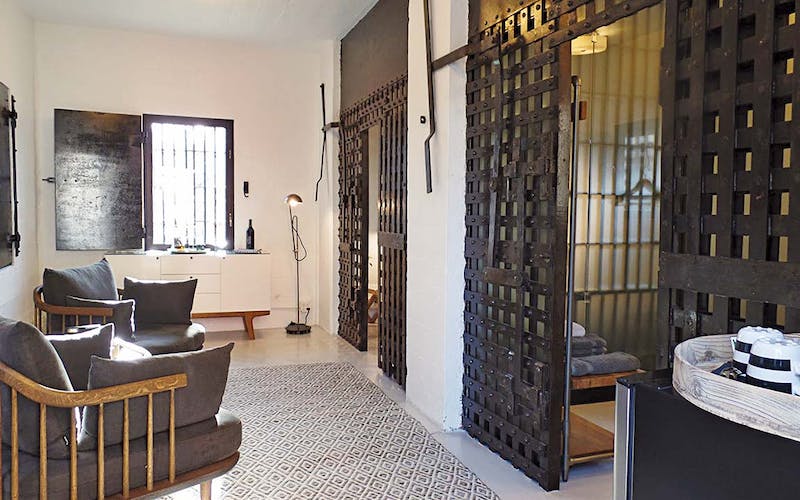 In Clifton, about 35 miles northwest of Waco, folks pay good money to get thrown in the slammer. Hidden down an alleyway painted with vibrant murals, the town’s thirties-era two-cell jail has been turned into a quirky one-bed, one-bath clink of one’s own. When Kaye Johnson bought it in 2014, the little big house had fallen into disrepair, having held its last inmates—most of whom had had too much to drink—in the seventies. The sheer novelty of getting to say you’ve spent a night behind bars (the original steel doors are still in place) is a draw in itself, but Johnson has gone out of her way to make sure you’ll be doing time in style with all the amenities of a high-end hostelry—and then some. A small library of prison-related albums has been left out by the record player (“I hear the train a-comin’, it’s rolling round the bend . . .” ), and you can pass the time by the fire pit on the rooftop’s “prison yard” while playing 42 with handmade dominoes. In lieu of breakfast, there’s booze: a bottle of Clifton’s own Red Caboose wine and an unmarked flask of hooch (it’s Balcones Distilling whiskey). Detainees, who are encouraged to snap a “mug shot” with the instant-film camera, are lucky there’s no law against penal puns. “We’re getting ‘released’ today with great sadness,” wrote a couple from Puerto Vallarta in the “cell log” notebook. “Must think of another crime so we can get sent back here soon!” Opened May 2014; 1 cell, er, room; starting at $225; stayatthecellblock.com