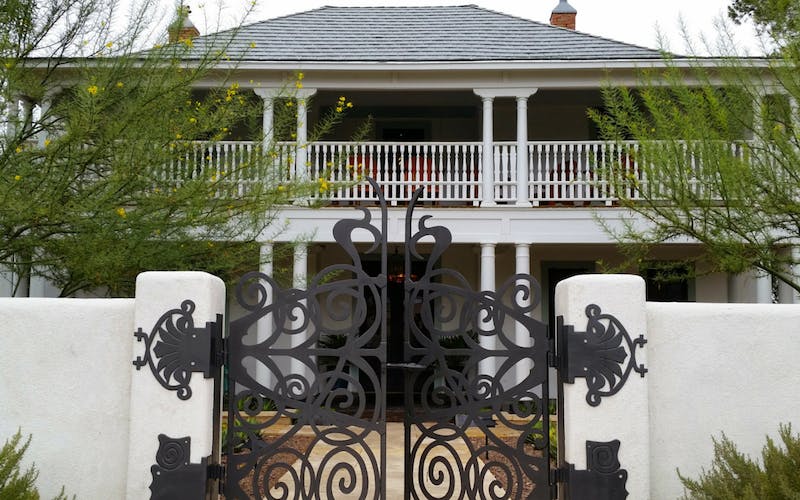 Let the cool kids have Marfa, I thought, as I sat on my private balcony at the Gage Hotel, 55 less-hyped miles east, in Marathon, which has been a restful way station ever since the railroad tracks were laid here in 1882. It was that same year that a former ship captain, Albion E. Shepard, bought land nearby and, thinking the plains bore some resemblance to those in Marathon, Greece, so named the budding settlement. I mention all this because it was his old home I’d taken up residence in, a white, two-story Colonial built in 1890 that’s gotten a full face-lift from the folks who run the Gage. The Captain Shepard House has become my favorite hideaway, with its five rooms reminiscent of a cattle baron’s dream retreat and its long, two-room carriage house out back, complete with an inviting porch, wooden rockers, and views of the green, green lawn (okay, so it’s synthetic grass). That’s why I’m hesitant to tell you about its quiet nooks and peaceful parlors. Or to reveal the improvements made elsewhere at the Gage, like the spiffed-up historic rooms and new private baths in the original building and the game lot outside complete with sand volleyball, bocce, horseshoes, and a chess board with toddler-size pieces. All of this is in addition to the 12 Gage restaurant, White Buffalo Bar, and ice-cold pool that, like an unexpected windfall, I’d really rather keep to myself. Renovated 2012–2015; 45 rooms; starting at $99; gagehotel.com