For thousands of National Rifle Association members gathered in Dallas on Friday, the Sutherland Springs church massacre of 26 people—specifically, the heroic actions of “good guy with a gun” Stephen Willeford—was an argument  against the student-led gun control rallies that occurred across the country following the mass murder of seventeen students at the Marjory Stoneman Douglas High School in Parkland, Florida. In the case of Sutherland Springs, the speakers at the NRA convention had proof that a good guy with a gun could stop a bad guy with a gun. What the speakers did not realize was that they really were making a case for the students’ demand for the nation to ban high-capacity rifle magazines.

In both mass murders, the shooter was armed with a variant of the AR-15 military-style tactical semiautomatic rifle. The Florida shooter used ten-round magazines in his weapon to fire off about one hundred fifty rounds during the ten-minute attack. In Sutherland Springs, the shooter left behind fifteen empty thirty-round magazines. He is estimated to have fired seven hundred rounds in eleven minutes during his killing spree.

But enter the hero of the Sutherland Springs church shooting: Stephen Willeford, who confronted the gunman with his own AR-15 and shot him twice, forcing the gunman to abandon the scene. The gunman later killed himself after Willeford and another man gave a high-speed chase. Willeford’s actions are rightfully credited with saving lives.

“While the losses that day were indescribable, what was clear later is that it actually could have been worse,” Vice President Mike Pence told the National Rifle Association/Institute for Legislative Action conference. “The murderer had ammunition and arms that would have claimed even more lives, but for the courage of an NRA instructor and the newest recipient of the ‘Defender of Freedom’ award, Stephen Willeford.”

Texas governor Greg Abbott, also noting Willeford’s NRA rifle training, said, “Because he had a gun, he saved lives.” U.S. Senator John Cornyn said the news media doesn’t like stories like that of Willeford because stories about people who enjoy shooting or who use firearms to defend themselves and their community go against the anti-gun narrative. “By some estimates there are three million defensive gun uses each year in this country—people who use their guns to protect their family and their property. But you might not have read that in the mainstream media.” But Cornyn said when Willeford heard the shooting at the church, he grabbed his AR-15 from his gun safe along with eight rounds of ammunition to confront the shooter.

Texas’s junior senator, Ted Cruz, expanded on Willeford’s story of heroism. Willeford took up a defensive position behind a pickup truck and confronted the shooter as he emerged from the Sutherland Springs First Baptist Church. “The shooter, as you know, was wearing body armor, but Stephen is an NRA rifleman, otherwise known as the media’s perfect nightmare,” Cruz said. “Stephen put two rounds into the shooter. One in his thigh and one in his side.” By the time Willeford caught up with the shooter during the chase, Cruz said, he was worried because he was down to two rounds of ammunition.

Willeford is a strong argument for a good guy with a gun, but consider how much ammunition the shooters in Florida and Texas were able to carry in multiple magazines. (Technically, the Florida shooter was not carrying high-capacity magazines, but the Sutherland Springs shooter was.) But here was the good guy stopping a killer with a mere six rounds—in a firefight.

President Trump gave no hint that was on his agenda, though, as he addressed more than 9,000 NRA members jamming the arena of the Kay Bailey Hutchison Convention Center. The president recalled, with inaccurate embellishments, the story of the citizens of Gonzales who refused to turn their cannon over to the Mexican army at the start of the revolution, creating the Republic of Texas. He invoked the slogan on their flag, “Come and Take It,” setting the arena off in shouts of “U.S.A., U.S.A.!”

In the wake of the Florida shooting, Trump had flirted with additional gun control and even chastised a Republican senator as “afraid of the NRA.” But Trump assured the group Friday that he was with them. “Your Second Amendment rights are under siege, but they will never, ever be under siege as long as I’m your president.” 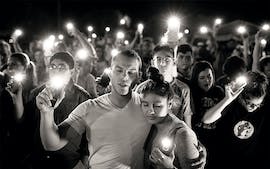 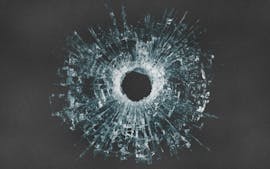 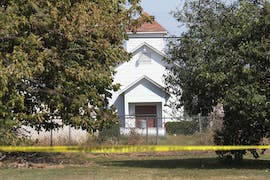 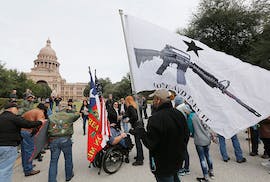