The fleet of several dozen cars pulled into East Austin’s Fiesta Gardens, or “Chicano Park” as locals call it, on a recent weekend with the booming of powerful stereo systems announcing their arrival. After a few loops around the park, some drivers—most of them Black and Latino men in their twenties and thirties driving customized lowriders, bright, candy-colored slabs, and jacked-up trucks with flashy chrome rims—packed into a nearby middle school parking lot. Some unloaded barbecue grills, toddlers, and pit bulls, then cracked open beers, and blasted Texas hip-hop and Tejano music. Others joined a slow-moving carousel that flowed from the parking lot into the street and back again, swerving from side to side and occasionally screeching their tires, unleashing plumes of white smoke that covered the block in a light haze.

Some variation of this assembly has taken place nearly every Sunday afternoon since the early nineties. But now many residents of The Weaver, a newly built luxury apartment building across the street—whose website promises renters access to a “community that is rich in history and tradition”—have decided it’s time for the weekly event to come to an unceremonious end. Some of the building’s residents defend the car club gatherings and note they predate The Weaver residents’ arrival in the neighborhood, but many others have grown tired of the loud music, annoyed by the traffic, and turned off by the smell of skidding tires. One particularly vocal tenant, a non-Hispanic white woman with short blond hair who appeared to be in her fifties and refused to give her name, claimed that smoke from the tires was killing nearby trees and that traffic from the gathering would make it impossible for an ambulance to reach her in the event of a medical emergency (though two other roads to the apartment building remain accessible at all times). Another Weaver resident voiced more generalized criticism, calling the event a “display of toxic masculinity.”

“[W]e should shut this thing down,” a third resident, who blamed the lack of police response on the “idiotic” city council’s decision to slash the Austin Police Department’s budget, wrote in March on a building forum. Indeed, at a recent gathering, a non-Hispanic white tenant had flagged two police vehicles and pleaded with officers to disband the celebration, calling it “scary.” The officers eventually drove off without taking any action. Even though the event sometimes violates noise and traffic ordinances, it doesn’t pose major threats to anyone in The Weaver, nor does it break other city rules.

By the Sunday I went to the park, the building had posted a security guard in the driveway in response to growing outrage among its residents, and concerns for their safety. Several angry residents gathered near him. A few threatened to call the police. A frustrated woman from Chicago who said she winters in Austin and would not be renewing her lease wondered aloud about the financial toll the gathering would exact upon The Weaver, which is owned by Greystar Real Estate Partners, an international developer based in Charleston, S.C. (The regional manager who oversees Greystar’s Austin properties did not respond to repeated requests for an interview.)

The conflict between residents of The Weaver and the car club is a microcosm of a larger struggle between professionals newly arriving in Texas, many of them tech workers, and the Black and Latino neighborhoods across East Austin that the newcomers are transforming through gentrification. With large tech companies including Apple, Oracle, and Samsung expanding operations in Austin, and many more making plans to relocate there, such conflicts have accelerated during the pandemic. Surrounded by new neighbors, many native Austinites say they’re often made to feel unwelcome in their own communities. For the car clubs, which gather in public parks on the front lines of gentrification, the feeling has been especially amplified.

Left: Members of the Hands Full of Cash Car Club pose at a recent meetup in East Austin. When new residents began to call the police on their gatherings, the club asked a city council member to step in.

Top: Chale Nafus sits on his porch in Austin’s East Cesar Chavez neighborhood. He’s lived in the community since 1975 and says gentrification has altered the neighborhood’s architecture, as well as its character.

The Weaver, built in 2020, features a pool, grotto, and a state-of-the-art fitness center, and sits on the southwest corner of the neighborhood known as East Cesar Chavez. For decades, the area was a working-class Latino neighborhood dominated by blocks of modest, single-family homes, and shaded by one-hundred-year-old pecan and oak trees. By the mid-1960s, construction of Interstate 35 placed a massive concrete rampart between local residents and the city’s more prosperous downtown, effectively severing the two areas. As recently as 2009, the economic cost of that isolation was still readily apparent, with the value of an average home in the neighborhood being a scratch more than $100,000, about half as much as the average home in the Austin area. But over the last decade, gentrification has intensified. By last summer, the median sale price for a home in East Cesar Chavez had climbed to nearly $800,000.

Though elements of the old neighborhood remain intact, the community’s character has been conspicuously altered. Modest homes with porches, where neighbors used to gather to chat at the end of the workday, have been torn down and replaced with hulking, multistory abodes that rise above security fencing. In 2015, Jumpolin, a beloved piñata store that had become a colorful symbol of the neighborhood’s Latino heritage, was bulldozed without warning. In its place, a cafe catering to cat owners was erected (and has since closed).

Chale Nafus, a local historian and longtime professor at Austin Community College, has lived in East Cesar Chavez since 1975. Sitting on his large front porch, facing a wall of new hotels rising a few blocks to the west, the 78-year-old told me the first wave of non-Hispanic white residents were artists who wanted to live in a “thriving, warm community” and “partake in the culture.” But he said that now, many of the newest residents obsess over exaggerated threats to their safety. Nextdoor, a neighborhood social media app, bristles with concern about unfamiliar vehicles being parked on the street, and complaints about loud music that violates city noise ordinances or a homeless man who has peacefully paced the neighborhood for decades. “I have to refrain from responding, ‘Good lord, don’t you understand where you’re living and what this once was?” Nafus said. “But it’s too late now—the tsunami has arrived.”

East Cesar Chavez is far from the only Austin community to face a wave of outsiders and rising property values. Austin is routinely ranked among the fastest-growing big cities in the United States, with about one million transplants migrating to the area over the past two decades, according to the city’s chamber of commerce. The new arrivals have forced many Black residents to move out of the city: In 2000, about 10 percent of the Austin’s 656,000 residents were Black. By 2017, that percentage had dropped to around 7.5, as thousands decamped for more affordable suburban communities such as Pflugerville, about 15 miles northeast of the Capitol.

Social gatherings such as weekend car club meet-ups have become ever more important as those traditional communities fracture. “A lot of us grew up here and were pushed out and this is how we come home to spend time with family and old friends,” explained Rogerick “Kountry” Davis, a 34-year-old City of Austin Aviation Department employee and the founder and president of the Hands Full of Cash Car Club. Davis, who lives in East Austin and has seen many of his friends priced out of the area in recent years, calls big automobiles, loud music, and barbecue a “Texas tradition.”

Slabs, Donks, and Swangas: An African-American Car Club Seeks a Home in a Changing Austin

For decades, clubs such as Davis’s have gathered on Sundays in Givens Park, a sixty-year-old East Austin community hub named after Dr. Everett Givens, one of Austin’s most famous Black civil rights activists. The park is about four miles northeast of Fiesta Gardens. Now many new residents call the cops on the club, and a gathering that had allowed Davis to wind down with loved ones before the workweek has started to leave him on edge. “You think you’re just calling and they’re going to kick us out, but it could always lead to something more,” he said. “It sucks because we’ve been doing this for so long!” Many neighborhood residents have asked city councilmember Natasha Harper-Madison, who grew up going to Sunday barbecues with her family at Givens Park, to step in, and she says she’s had some success de-escalating police calls by challenging new residents to talk through their fears, as well as their concerns about noise and traffic.

On a recent Saturday afternoon, Nafus gave me a tour of East Cesar Chavez. We walked past a local school where he used to coach a teenage breakdancing team, almost all of whose members have moved out of the neighborhood, and a tiny grocery store run out of a house that had been boarded up. A few blocks south, Nafus introduced me to a man relaxing in his backyard, Sabino “Pio” Renteria, who represents the neighborhood on the city council and has lived in it for forty years. He said that for as long as he’s been there, car lovers have gathered in various parking lots around “Chicano Park” on Sundays. The gathering across the street from The Weaver can get noisy, he admitted, and even he has called the police to break it up when some car owners lingered past 8 p.m. But he said that “we’ve got customs here that have been going on for decades and they’re going to continue.” Asked what he’d tell newly arrived residents, Renteria replied he’d urge “patience” because “it’s just a few hours out of the week.”

The next day, it was clear that patience remained in short supply. Watching from her upper-floor apartment, one of The Weaver’s most vocal critics of the car clubs, the blond woman who worried about emergency responders being able to reach her, decided she’d had enough. She bounded downstairs and into the street in high heels, holding her iPhone to film the offending vehicles and threatening to call the police on another group of men standing beside an old-school Ford sedan who looked unamused. “You can’t tell me drugs aren’t being distributed over there,” she huffed. “The brazenness of it all just kills me!”

About one hundred feet away, a twentysomething member of a car club in shorts and a T-shirt, who said he goes by the nickname “Kilo,” calmly watched the bizarre scene unfold. Born and raised in Austin, he said he’d been coming to the park to check out custom cars and connect with old friends since he was a kid. He wondered why instead of calling the police and creating unnecessary tension the blond woman and other angry residents hadn’t walked across the street and introduced themselves first, opening up dialogue. “If you come with good energy, you’ll find out that we’re just here to chill and enjoy the cars and the scenery,” he said. “Don’t be scared.” 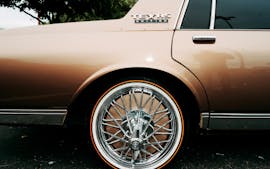 Slabs, Donks, and Swangas: An African-American Car Club Seeks a Home in a Changing Austin