WHAT: Affectionate memes of the former presidential candidate, in his instantly iconic attire from the inauguration, photoshopped across Texas.

WHY IT’S SO GREAT: Hundreds of prominent figures appeared at Wednesday’s presidential inauguration, from former presidents Barack Obama and Bill Clinton to celebrities including Lady Gaga and Jennifer Lopez. But the biggest star of the day—on the internet, at least—was U.S. senator and former presidential candidate Bernie Sanders. A photo of Sanders sitting off on his own during the ceremony, hunched in a folding chair with his arms grumpily crossed, immediately went viral. While other attendees dressed up in suits and wool peacoats, Sanders was comfortably bundled in the same olive-green Gore-Tex parka he wore on the campaign trail, along with a colorful pair of mittens hand-knitted by a Vermont constituent. This practical attire, combined with the fact that he was carrying a large manila envelope, suggested that Sanders had casually stopped by the inauguration while running errands—exuding an over-it vibe that resonated with many weary Americans.

I see everyone mocking Bernie's "grandpa at the post office" vibe today but those mittens are clutch pic.twitter.com/cVwINTnqR6

By Thursday, Twitter was teeming with memes: Bernie at the Last Supper. Bernie on the moon (and Bernie on a moon in the video game Destiny 2). Bernie in a French Postimpressionist painting. Bernie at the Yalta Conference during World War II. Bernie sitting next to Forrest Gump and riding shotgun with Guy Fieri. Bernie taking part in a renowned performance art piece by Marina Abramović, in which the artist and a guest simply stare at each other. Bernie on the bridge of the U.S.S. Enterprise, because why not?

At a time when the internet so often feels toxic and divisive, and when Americans are still exhausted from the near-constant crises and attacks on democracy that made up the collective nightmare of the last four years, these memes are a breath of fresh air. Scrolling through them feels as wholesome as going apple-picking in the crisp, cool Green Mountains of Vermont. Though Sanders is a political figure, this phenomenon is refreshingly apolitical, and anyone can join in the fun by photoshopping their own niche tribute. Plenty of Texans did just that, sending the septuagenarian senator to iconic locales around the state. We’ve gathered a few of our favorites below. And if you too choose to virtually invite Bernie to Texas by making your own meme, tag @TexasMonthly on Instagram or Twitter, or email [email protected], and maybe we’ll share your photo on social media.

In line at Franklin Barbecue: 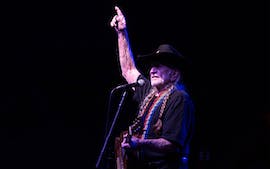 And watching the pit at La Barbecue:

Taking in the sunset in El Paso:

At the Texas Capitol with a shirtless Danny Trejo:

Dreaming of the day we can see live music again at the Far Out Lounge in Austin:

A post shared by The Far Out Lounge (@thefaroutaustin)

Checking out a new art exhibit at Ruby City in San Antonio:

Waiting for the pandemic to be over so I can visit Ruby City like… #BernieSanders pic.twitter.com/L5FcD73oxi

Noticeably not drinking a pint at Austin’s Draught House:

Remember when you had to take your own chair to Draught House pic.twitter.com/lJVvqoIcEF

Cheering on the Houston Astros:

How did we never notice this before??? pic.twitter.com/1V39kNKuNC

At the Cloak Room, an Austin speakeasy popular with lawmakers:

For our friends in #Austin, @BernieSanders is waiting for the Cloak Room to open. #txlege pic.twitter.com/K8n5vBF7HU

Under papel picado in San Antonio:

About to enjoy a P. Terry’s burger:

Just hanging out in Lubbock:

Waiting for the return of the Houston Livestock Show and Rodeo:

And, of course, visiting the Alamo.