Beto O’Rourke is a 45-year-old three-term congressman representing the sixth-largest city in Texas. He serves on the less-than-almighty Armed Services and Veterans Affairs committees. In parliamentary parlance, he’s a back-bencher. He is currently running a long-shot Senate campaign in a state that hasn’t elected a Democrat to statewide office since 1994, and, to this day, he hasn’t led a poll in the race. But over the past couple weeks, certain quarters of the internet have floated the idea that O’Rourke might very well run for President of the United States as soon as 2020.

The precipitating cause for much of the talk was the release of an instantly mega-viral video of O’Rourke answering a town-hall question on how he felt about NFL players protesting police brutality and racial injustice during the national anthem. O’Rourke’s response—a long, nuanced commentary on America’s civil rights history—has been viewed on the Facebook page of the liberal media group NowThis Politics more than 24 million times and immediately set off a Twitter storm. LeBron James called it a “must watch.” Russell Crowe called O’Rourke “a dude.” Ellen DeGeneres said she wanted to meet him.

Political commentators also began floating the idea that O’Rourke could soon be running for an office even higher than the U.S. Senate. The longtime Washington political writer Ron Brownstein wrote: “If ‪@BetoORourke can get over the hill in TX-still a very tough climb for those last few points-he seems clearly the best positioned Democrat to rapidly accelerate, Obama-style, from initial statewide victory to instant presidential buzz in the 18/20 cycle.” Steve Schmidt, senior advisor to John McCain’s 2008 presidential campaign, asked: “Anybody else see a little bit of RFK in Beto?” A week before the release of the video, the Austin American-Statesman’s Jonathan Tilove had already predicted that “if O’Rourke were to come within 2 or 3 points of Cruz, I think he would be the presumptive front-runner for his party’s presidential nomination.”

Speculation about O’Rourke’s presidential prospects is nothing new. The very first time I heard O’Rourke’s name, several years before his Senate run, a fellow journalist told me in the same sentence that the El Paso congressman would one day become president. When I was reporting a cover story about O’Rourke last year, former El Paso County Judge Veronica Escobar, who is running for (and almost certain to win) O’Rourke’s congressional seat, said that she thought O’Rourke would “go even further than the Senate. I think he’ll win this seat and he’ll keep going.” In my story, I wrote that if O’Rourke won “he would be viewed as presidential timber.” A Democrat who could win a Senate race in deep-red Texas would have to be a politician of such broad appeal and prodigious talents that party leaders would find it impossible not to try to draft him for a White House run. In retrospect, my line was wrong—O’Rourke is already viewed as presidential timber, and his most likely path to the White House will unfold only if he loses his Senate race against Ted Cruz.

Speculating about the presidential prospects of fresh-faced politicians is a parlor game, not all that different from poring over NFL draft rankings and imagining how many Super Bowl trophies Baker Mayfield or Sam Darnold will hoist above their shoulders. The smart money is always on not becoming president and not winning a Super Bowl. But the smart money was against Bill Clinton, Barack Obama, and Donald Trump at various points, too, so it’s worth entertaining the possibility of O’Rourke’s long shot.

If O’Rourke pulls off a stunning upset and defeats Cruz in November, he would almost certainly be boxed out of the national Democratic ticket until 2024 at the earliest. O’Rourke has criticized Cruz repeatedly for using his Senate seat as a launching pad for a presidential run. Cruz, in O’Rourke’s estimation, is a “guy who ran for president for four years and literally left the state of Texas to visit each of the 99 counties of Iowa instead of being in [Texas].” Were O’Rourke to win Cruz’s seat and then announce a presidential run mere months into his first Senate term, he would need a lot of chutzpah and a hell of an explanation to defend against charges of hypocrisy. And considering that O’Rourke, who has been campaigning nonstop since early 2017, is not only a viral sensation but a human being and the father of three school-aged children, it seems unlikely that he’d want to savor one of the biggest electoral upsets in American history by going back out on the road for another two years.

Then there would be the matter of his seat. A Democrat-held Senate seat in Texas would be a precious commodity—a blue stronghold in the biggest red state—and the national party would be loath to give it up. O’Rourke would only have to surrender his new office if he actually won the presidency, but if he did, Texas’s governor (likely to still be Greg Abbott) would appoint a Republican to O’Rourke’s seat only two years after O’Rourke won it. This logic also means no Democratic presidential candidate would seriously consider selecting a Senator O’Rourke as his or her vice-president in 2020. (Such calculations boxed in Hillary Clinton on her vice-presidential choices, ruling out Senators Elizabeth Warren, Sherrod Brown, and Cory Booker, who all represent states then led by Republican governors.) Until Democrats were confident that Texas had become a truly blue state, the prospect of O’Rourke’s ascension on the national stage would always be clouded with the reality that it would likely come with a setback in the Senate.

But if O’Rourke loses a nail-biter, he and the Democrats are freed from weighing such scenarios. O’Rourke might very well entertain calls to run for president in 2020, but in what’s certain to be a very crowded primary field, he’d face another uphill climb. It’s more likely, I think, that O’Rourke would go home to El Paso; lead an effort to fight for immigrants’ rights; spend time with his family; reread his favorite book, The Odyssey, yet another time; and write a door-stopper candidate memoir offering his vision for a stronger, more united America. When the summer of 2020 rolled around, and the Democratic primaries had shaken out, O’Rourke—having stayed out of the fray—might well get a phone call from the new Democratic nominee offering him the vice-presidential slot. From that position, O’Rourke would be the national party’s heir apparent, particularly if he were sharing the ticket with an older Democratic politician like Warren, Vermont senator Bernie Sanders, or former vice president Joe Biden.

Would O’Rourke do it? Last year he told me, “anytime you’re in politics, some part of you consciously or unconsciously thinks about other offices.” There’s no doubt that the “other office” right now is the Senate seat and that O’Rourke would prefer beating Cruz to losing and hoping a Democratic presidential nominee picks him for the national ticket in two years. Texas Democrats, too, should probably hope that O’Rourke remains at home, even if he loses to Cruz. The state party’s infrastructure lags well behind that of the GOP, and O’Rourke could help rebuild it much more effectively from El Paso or Austin than he could from the vice president’s residence in Washington, D.C. Still, such has been the El Paso congressman’s streak of good press and respectable polls of late that it’s beginning to look like even a loss in his Senate race might not diminish his political momentum. 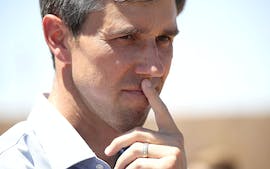 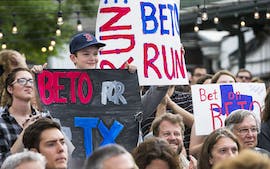