Big oil and art have a long, symbiotic relationship in Houston—just take a look at any list of patrons for any of the city’s museums, and you’ll find names like Cullen, Blaffer, Cullinan, Wiess, Hogg, Kinder, and de Menil. As the home of the Orange Show, the Flower Man House, the Beer Can House, the scattered monumental sculptures of David Adickes, and the birthplace of the Art Car movement, Houston is also a city of folk art installations and institutions.

Nowhere do those twin traits meet quite like Texas Pipe & Supply’s Eclectic Menagerie Park, a few miles south of downtown on Texas Highway 288. From humble beginnings about twenty years ago, the Eclectic Menagerie has grown to become one of Texas’s most prominent slam-the-brakes what-the-hell-is-that roadside attractions, a family-friendly and fun example of the energy industry bringing art and joy directly to the community.

It all started thirty years ago with a concrete hippo Texas Pipe’s chairman Jerry Rubinstein liberated from an El Campo statuary and re-homed on a few acres of spare land he owned between his pipe yard and the highway feeder road, just south of West Bellfort Avenue. Not long after that, the hippo was joined by a rhinoceros, and then there proceeded a slow but steady phantasmagoria of original creations, now totaling more than two dozen, most courtesy of burly, bearded 67-year-old Texas Pipe welder/sculptor Ron Lee, who uses scrap materials from the pipe yard. 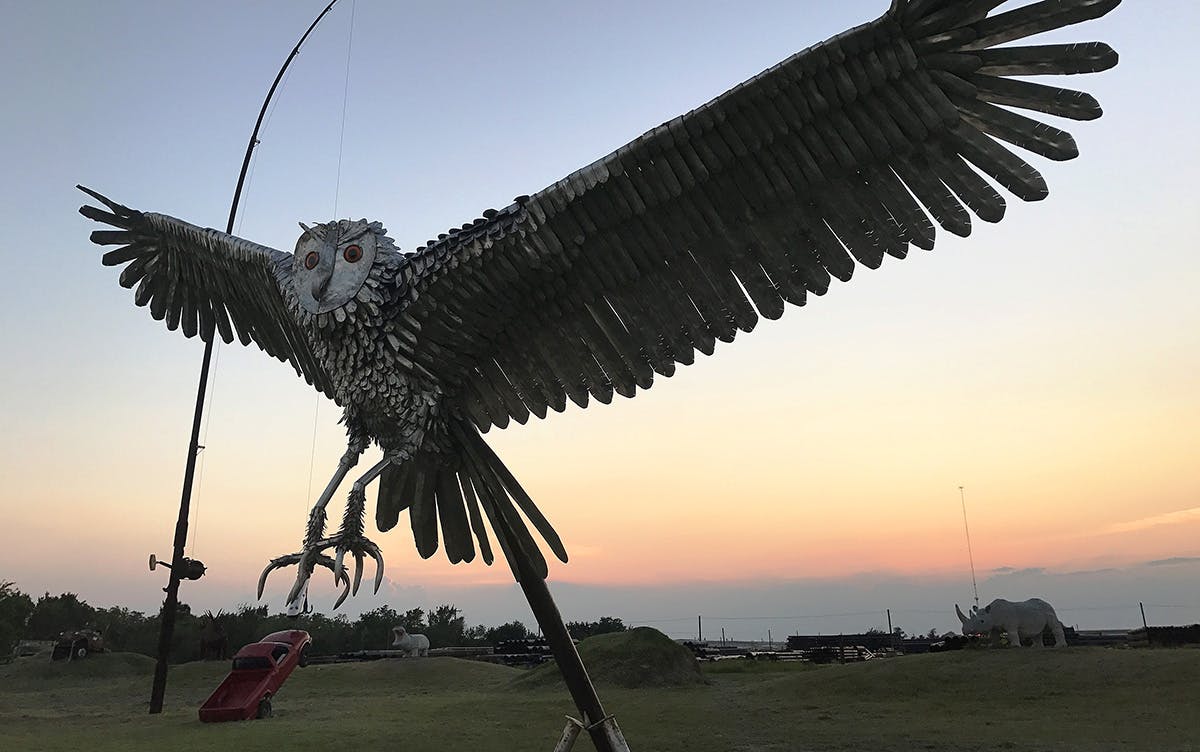 There are Texas critters (armadillo, roadrunner, giant grasshopper); mythical/extinct beasts (a dragon, a stegosaurus, a bipedal creature with an alligator-like snout); birds (eagle with outstretched wings, preparing to land, and a shiny chrome owl). You also find Snoopy at the controls of a red-and-white propellor plane banking in slow and low, King Kong celebrating as he nears the apex of a crane, a giant fishing rod reeling in a Mazda pickup truck, a trio of gaudily painted steers, a stealth fighter and a biplane, a 12-piece mariachi band performing atop a beam high in the air, and—arachnophobes beware—a legitimately terrifying spindly iron spider reared up for mortal combat.

There’s not much in the way of rhyme or reason in the contents of the collection—with everything from warplanes to soldiers to dinosaurs on the grounds, you could call its governing esthetic “five-year-old’s toybox writ large.”

Which is not meant as an insult by any means. The Eclectic Menagerie is just that—to resort to the dictionary, it is indeed “a strange or diverse collection of people or things” “deriving ideas, style, or taste from a broad and diverse range of sources.”

And by that measure, the Eclectic Menagerie is the most Houston museum in the Bayou City, even truer to the local vibe than the Art Car Museum. Think of it: using the very materials that drive this city’s economy and compose its blue-collar image, Lee and Rubinstein have captured the Bayou City’s freewheeling, somewhat self-deprecating ethos, where the only plan is to have no plan and see what happens then.

(Visiting the Eclectic Menagerie is a little tricky. It is neither an official park nor a museum, and don’t expect the grounds to be meticulously maintained. Should you want to snap a few pics, there is an expansive shoulder along the Hghway 288 feeder road on the west side of the property allowing for safe parking while you do so.)

The Blind Sculptor From Beaumont Who Broke the Mold