After several months of peddling his heroic tale about President Donald Trump, patriotic anti-corruption crusader, while also calling for the long-overdue impeachment of Hunter Biden, Texas senator Ted Cruz has finally parlayed his side hustle into a podcast, the natural habitat for conspiracy theories, self-indulgent theatrics, and bearded white guys. Verdict With Ted Cruz dropped this week on iTunes and Spotify, giving its listeners Cruz’s unfiltered, late-night thoughts on the day’s impeachment proceedings—ideal for anyone who wants a fair, impartial take on why the Democrats are vindictive liars, or who simply can’t get enough of Ted Cruz’s voice in their ears. Apparently, that describes thousands of people: Verdict is currently number one on the iTunes charts, besting even podcasting juggernauts like The Joe Rogan Experience, whose own dalliances with fringe political views and Trumpian surrogates are usually just for the lulz.

Not so for Verdict, which finds Cruz sitting down with conservative commentator Michael Knowles to reiterate the talking points he’s long used to frame the narrative of Trump’s defense in dozens of TV and radio appearances, regardless of the actual questions being asked (or as he put it to the Dallas Morning News, “engaging in substance, analyzing and explaining issues and winning people’s hearts and minds”). Cruz attributes its surprise success to its digestibility—episodes are deliberately timed at about 25 to 30 minutes, to complement the average American’s commute—as well as to the vague hunger for something beyond the sort of “30- and 60-second soundbites” being deployed by people like Ted Cruz throughout the day. Verdict is an antidote, perhaps, to the impeachment “circus” that the “American people” are so darn “tired” of, they can only stomach thinking about it during their entire drive home, every single night. Or maybe people just can’t get enough of serial killer podcasts? Either way, Verdict has proved so popular that, perhaps unsurprisingly, Cruz is considering keeping it going even after the trial ends, potentially transitioning fully into this all-new niche of opportunism.

Ken Starr Is Back on the Case

I was ten minutes late for my next drink when she darkened my door. Her silhouette was as unmistakable as that blue dress she’d worn long ago, the one I’d described in near-pornographic detail the last time we’d done this dance. “It’s been a long time, Ken Starr,” she said, and I knew right away that I was in for it. I’d been out of the game for a while now, cooling my heels down South while resting them on a big stack of unread sexual assault allegations. I’d been keeping my nose clean with joe jobs, like upholding bans on gay marriage or standing up for child molesters. “I need this like another hole in the head, or another article calling me ‘Jeffrey Epstein’s lawyer,’” I growled, hoping she’d get the message.

“We’ve already got one of those,” she cooed. “But we could use another one. We need you, Ken Starr. We need the boldly disingenuous rhetoric, the sweeping sanctimony, the brazen shamelessness. We need some of the old magic.” I knew Lady Impeachment wouldn’t leave me alone until I relented. She was a tough dame, with legs that went all the way up to a place I would not dare describe unless it was in some kind of federal report. I also noticed those legs looked a bit shakier this time around, here on this side of the partisan divide. Funny how the high ground can shift, depending on which way the political wind is blowing.

So I gave in. I knew Lady Impeachment would never let me rest until I’d agreed to do her dirty work again, to go sniffing around this mess and see just how much worse I could make it. Sighing, I grabbed my hat and my coat. I caught the midnight train to Palookaville. I was back on the case.

“The Senate is being called to sit as the high court of impeachment all too frequently,” I said. Wham!

“How did we get here, with presidential impeachment invoked frequently in its inherently destabilizing as well as acrimonious way?” I said. Blam!

This was it. I had them back on their heels, seeing little blue birdies—dizzy with the kind of chin music that’s played by a prizefighter’s fists, or the cognitive dissonance that comes from being lectured on impeachment abused as a partisan weapon by the very guy who turned it into one. Those poor saps, with their standards and memories of recent history. They never knew what hit ’em.

When it was all over but the shouting and the side-by-side video montages, Lady Impeachment found me out in the hall, brooding under the gas lamp I always keep stashed in my coat.

“Baby,” I said, tipping the brim of my hat, “it died years ago. This here is just the long goodbye.”

Pete Olson Tells Us How to Get to Analogy Street

It isn’t easy breaking down the complex situation currently unfolding in Georgia, where the former Soviet republic turned democracy has seen so many of those gains threatened under the oppressive rule of oligarch Bidzina Ivanishvili. So some credit is due to Texas congressman Pete Olson, who this week attempted to explain this murky, growing crisis using that most educational of tools: muppets. “What does Oscar the Grouch from Sesame Street have in common with the Republic of Georgia’s oligarch, Bidzina Ivanishvili?” Olson asked the U.S. House this week. “What do they have in common? Answer: They are both puppets who trash their own home.”

Olson’s devastating zinger—delivered with his usual guy-with-a-sinus-infection timing—came on the heels of a letter to the Georgian prime minister expressing American concerns over delayed electoral reforms and the treatment of pro-democracy protesters. And although he doesn’t actually sit on the committee that authored that letter, Olson also tweeted his support for it. He later echoed its sentiments in his speech, saying that Ivanishvili had “crushed basic human rights,” while accusing him of being a “puppet” of Vladimir Putin. (You know: puppets, like on Sesame Street.) Fighting Russian interference in an unstable democracy is a noble cause for Olson, and one that mostly excuses the fact that Oscar the Grouch doesn’t “trash his own home.” He purposefully makes his home within already extant trash, out of a genuine love for anything that’s been used and discarded. C’mon, Pete!

Still, in case you’re wondering why Olson, the Houston-area representative who announced his retirement last summer, would suddenly be so focused on fighting for democracy in Georgia so near the end of his political career, Olson quickly cleared things up by noting that a Texas-based oil company, “Frontera Resources, has been drilling in Georgia for years and years and years … Now they are drilling zero wells in Georgia.” Indeed, Frontera has donated nearly $10,000 to Olson since 2016, which could maybe, possibly explain these newfound convictions. Hey, what does Big Bird from Sesame Street have in common with representative Pete Olson? They both know who feathers their nest.

It’s been just over a week since Texas congressman Vicente Gonzalez brought the full powers of his office to bear on the most important challenge facing any politician: getting a celebrity to hang out with you. As we previously reported, Gonzalez first extended an invitation to actress America Ferrera to be his guest at this year’s State of the Union, a.k.a. the political prom—an offer that, as far as we can tell, was ignored by just about everyone, with the possible (and depressing) exception of us. Gonzalez noticed our noticing: “[email protected] can you blame us for trying?” he asked, simultaneously re-upping the offer to Ferrera. He then hedged his bets by making similar entreaties to both Willie Nelson and model Chrissy Teigen—which, no, Representative Gonzalez, we cannot blame you for trying. Attempting to parlay your influence into making people like Willie Nelson and Chrissy Teigen sit next to you is the bedrock of American politics. 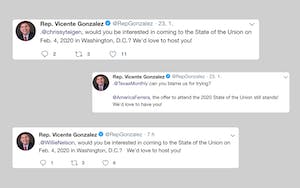 Gonzalez later deleted all of these tweets, perhaps concerned that they could come off as unbecoming or overly thirsty. Maybe! Still, we refuse to rest until we find someone sufficiently famous to be Gonzalez’s State of the Union guest. If we pool our resources—and perhaps most importantly, lower our bars for “celebrity”—surely we can badger at least one into attending. Mark Hamill seems like a nice and, crucially, very online guy. Or what about the singer from Smash Mouth? He probably doesn’t have anything going on that night. Teri Hatcher? Dax Shepard? Anne Heche? These are people with familiar faces that might get the cameras to swing toward Gonzalez’s section. Tell you what: let’s have a little confab about it, come up with some names, then meet back here next week to see if we can get Gonzalez and a celebrity, any celebrity, in the same room, before he has to resort to something truly undignified—like starting a podcast.