Today, we’re continuing our “Get to Know a Swing District” series with a look at Texas’s Twenty-fourth Congressional District. 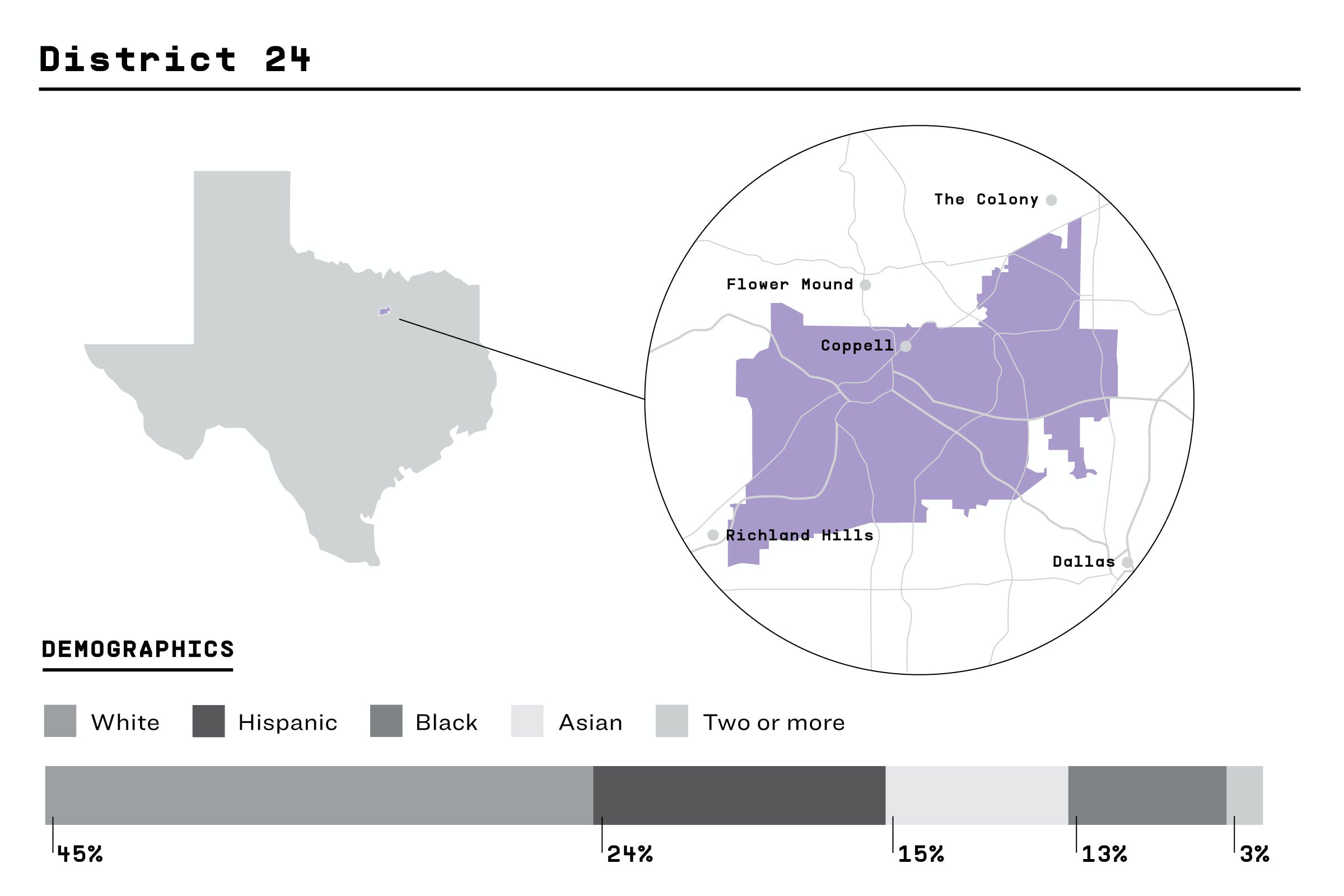 For three decades after its formation in 1972, two Democrats represented Texas’s Twenty-fourth Congressional District. But in 2003, the state Legislature redrew the district to include a more conservative slice of North Texas, and Republican Kenny Marchant claimed the seat. Marchant held it for seven reelection bids, in which he generally faced only nominal Democratic opposition.

In 2016, Marchant ran against a political newcomer, accountant Jan McDowell, and defeated her by seventeen points, the kind of margin to which he’d become accustomed. Two years later, however, McDowell challenged him again, and Marchant won by only three points. Less than a year later, Marchant announced his retirement from the House. This year, two newcomers to the congressional ballot, Democrat Candace Valenzuela and Republican Beth Van Duyne, are vying to represent the district.

The front of an old-timey steam engine. The district covers a stretch of some of the wealthier suburbs between, and just north of, Dallas and Fort Worth, including Carrollton and Southlake. Much of the George Bush Turnpike, named after the forty-first president, falls within the district, as does Dallas–Fort Worth International Airport. 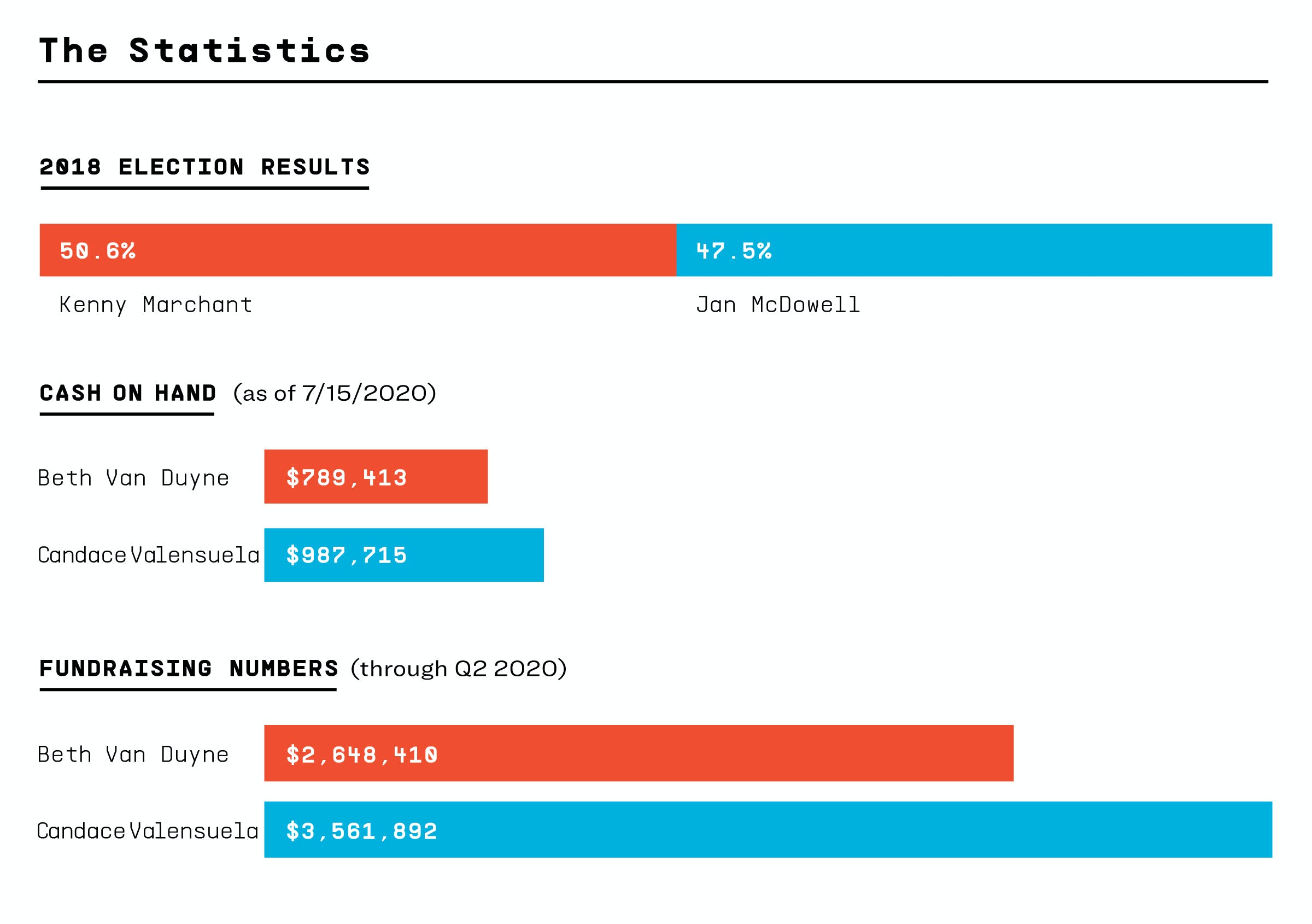 She launched her first bid for Congress this cycle, but Van Duyne is not new to public office. She served as the mayor of Irving, just outside of the district, from 2011 to 2017. As mayor, she made political hay by attacking Islam, once proposing a city council resolution opposing the imposition of sharia law by Texas courts and later defending the headline-making 2015 arrest of fourteen-year-old Ahmed Mohamed, who brought to his Irving school a homemade clock that was mistaken for a bomb. At the end of her second term as mayor, Van Duyne joined the Trump administration as a regional Department of Housing and Urban Development administrator.

Following Marchant’s retirement announcement, Van Duyne entered the GOP primary, won Donald Trump’s endorsement, and easily won a five-candidate race. At times, she has shied away from the conservative brand she built earlier in her career: in her main campaign ad, she doesn’t identify her party, and speaks passionately about the need to “have coverage for pre-existing conditions.” However, she has also described the Affordable Care Act—the law that outlawed insurance companies denying coverage to those with pre-existing conditions—as “based on lies” and having “done profound damage to the healthcare of Americans,” and told the Dallas Morning News in January that “we need to get rid of the regulations that are strangling doctor-patient relationships.” Like the president and other leaders of her party, she has not proposed any specific plan to protect coverage for those with pre-existing conditions if the Supreme Court repeals the ACA.

Van Duyne favors a pathway to legal resident status, but not citizenship, for undocumented immigrants brought to the U.S. as children, unless they serve in the military. She supports Trump’s “remain in Mexico” policy, which requires migrants seeking asylum to wait for their hearings south of the border, and his policy of imposing tariffs that drive up the cost to Americans of goods they choose to buy from China. She acknowledges that “the climate is changing,” but told the Morning News that “it has been changing since the end of the last Ice Age” and offered an expansion of nuclear reactors as her favored remedy.

Through the end of the third quarter of this year, Van Duyne raised an impressive amount—around $2.6 million—and has spent it steadily in her bid for the seat, with just less than $800,000 in the bank at the end of September.

Valenzuela navigated a tricky Democratic primary for her party’s nomination. She faced off against not just McDowell, the Democrat who’d proved the district could be competitive in 2018, but also Kim Olson, the party’s 2018 nominee for state agriculture commissioner. Olson was the top vote-getter in the March primary, but Valenzuela qualified for the runoff, where she proved an adept candidate, winning by a twenty-point margin.

Valenzuela has an unconventional biography for a major party congressional candidate. Early in her life, she and her mother experienced homelessness. She was the first in her family to go to college, attending Claremont McKenna in California, and worked as a college admissions adviser and taught SAT and ACT prep courses. She first entered politics in 2017, when she won a seat on the Carrolton–Farmers Branch school board. If elected, she would be the first Afro-Latina member of Congress.

Valenzuela boasts the support of Joe Biden, Julián Castro, Kamala Harris, Barack Obama, Beto O’Rourke, and Elizabeth Warren, among others, and garnered an endorsement from the late John Lewis before his death. Valenzuela’s views are roughly in the center of her party—she’s to the left of its top leadership, and to the right of other young progressives like New York congresswoman Alexandria Ocasio-Cortez. She supports most of the provisions of the Green New Deal, but not a fracking ban; a public health-care option, but not a single-payer Medicare for all system; creating a pathway to citizenship for undocumented immigrants brought to the U.S. as children; and ending raids by Immigration and Customs Enforcement agents, but not abolishing the immigration agency.

Valenzuela has raised a bit more campaign cash than Van Duyne has, receiving nearly $3.6 million in donations through the end of September. She has spent that money at a rate similar to her opponent, with just less than a million dollars left in the bank for the final weeks of the campaign.

The story in TX-24 is similar to that of neighboring TX-32, which flipped to Democrats in 2018: a once solidly GOP suburban district faces both demographic changes and political realignment among white, college-educated voters. Voters in Texas’s Twenty-fourth supported Mitt Romney over Barack Obama by 23 points in 2012, Trump over Hillary Clinton by only 6 points in 2016, and Beto O’Rourke over Ted Cruz by 3.5 points in 2018.

Valenzuela pulled off an upset once by winning her primary, and she’s well-positioned to activate the growing number of young voters of color in the district. Tom Marshall, a political science professor at nearby UT-Arlington, told Spectrum News in September that the district had evolved in recent to one that’s “decidedly more Hispanic … a little more Black … [and] a little more young.” With Marchant’s retirement, Republicans now don’t have the benefit of incumbency and face a Democrat with more funding than previous challengers could muster. Two internal Democratic polls, taken during the summer, found Valenzuela up by six and seven points, while a nonpartisan poll from July and early August found the race a toss-up. (Van Duyne hasn’t released any internal polls.)

The story this year could resemble the one in 2018: a Democratic challenger overachieves relative to past congressional race, but comes several points shy of Beto O’Rourke’s performance in the district and narrowly loses. Even as O’Rourke won TX-24 by 3.5 points, Marchant won his race by almost the same margin in 2018, providing a little bit of breathing room for Van Duyne.

Ask three experts about the fate of TX-24 and you’ll get three different answers. The University of Virginia Center for Politics’s “Crystal Ball” marks the district as lean-Democratic, the polling forecasters at FiveThirtyEight give Van Duyne a 60 percent chance of winning, and the Cook Political Report lists the race as a toss-up.