This article originally appeared in the August 2018 issue with the headline "Parent Traps."

When the Trump administration announced its “zero tolerance” policy on illegal immigration last April, Charles Foster predicted the chaos that would ensue. As an immigration adviser to George W. Bush and Barack Obama and chairman of Americans for Immigration Reform, the McAllen native and Houston-based lawyer has tried to guide the country toward a comprehensive immigration plan for decades. But he’s found that political will is lacking when it comes to making difficult decisions. As the family-separation crisis continues to drag on, Foster has some suggestions for how we might move forward—if anyone is listening.

TEXAS MONTHLY: When the Trump administration put “zero tolerance” in place, did you anticipate what would unfold?

CHARLES FOSTER: Yes. It was pretty black and white. A deportation proceeding is a civil proceeding that results in removal from the country. But when Sessions said “zero tolerance” and “We will prosecute you,” that changed things. The government cannot incarcerate a child in a federal criminal facility. So, inevitably, the government was going to have to separate the parents from their children. And furthermore, the Trump administration was saying they wanted to separate families as a deterrent.

TM: You still talk with Texas politicians. What do they say behind closed doors?

CF: Our political leadership is missing in action. For fear of retaliation in the primaries, most of our elected members of Congress, particularly on the Republican side, just put their heads in the sand. They come out meekly and say, “Okay, we have to secure the border first,” and that’s an elusive goal. You wouldn’t know it from the rhetoric, but the border is more secure today than it’s been in forty years. Right now the president’s upset because the number of detained aliens crossing the border is roughly 300,000 to 400,000 annually. Do you know the corresponding figure when Clinton was president? At its height, it was 1.6 million a year. And the recent numbers are grossly misleading, because many of these people are refugees who are surrendering themselves at ports of entry, not illegal immigrants. So we’ve gone from about 1.6 million to maybe 200,000. And yet, listening to the rhetoric, you’d think that this is the greatest border-crossing crisis in our history.

TM: What do politicians say they would like to do?

CF: People tell me every day, “This is the most difficult, complex issue.” That’s completely false. What to do is easy. The difficult part is the politics. You can never get past first base because of the restrictionists, led by people like Sessions. They’re not anti–illegal immigration, they’re anti–all immigration.

TM: And in Texas, when you talk to non-politicians, what percentage agree with you?

CF: More than seventy percent of Americans support some pathway to citizenship.

TM: So, politicians agree with you, and then say, “But I can’t say anything, because I’ll get creamed in the primary”?

CF: Yes, basically; most of them would agree with me, but they don’t have the political will.

TM: So what would you suggest as a solution?

CF: Given the fact that we’re spending a massive amount of money in terms of warehousing people, I would say, “We’re going to adopt Guatemala, El Salvador, and Honduras—the three countries now responsible for most asylum claims—and help law enforcement in those countries reduce the levels of crime and boost the economy, producing more jobs in those three areas.” On this side of the border, I would have a massive recruitment of judges and trial attorneys. We’d hire young lawyers and train them to not only represent the interests of the government but to represent the interests of the asylum seekers as well. The asylum applicants do not have the knowledge, the sophistication, the time, the access to reports about conditions in their country, or the ability to obtain third-party affidavits that would support their cases. They have no way to do that.

TM: You’d recruit lawyers and judges because of the backlog of asylum cases?

CF: The backlog is measured in years. Ted Cruz proposed that asylum claims be determined within fourteen days, but he also recognizes that, in order to do so, you’d need a huge increase in the number of Department of Justice immigration judges and trial attorneys.

What Obama did, and I didn’t like it, was push the claims of all these unaccompanied minors from Central America to the head of the line so they could quickly deny them, sending a negative message to their countries.

I would train immigration judges and trial attorneys so that they’re true fact finders, not government agents trying to see how fast they can deport people.

TM: Can you look into your crystal ball and see how things are going to turn out in the next few months?

CF: The media attention will go away, and you’ll still have families coming with their children, but the numbers will no longer be a political problem. You will not hear a single Texas congressman on the Republican side speaking out on this issue. If you force him to, almost like a robot, he’ll say, “Oh, we need more border enforcement.” That’s it. 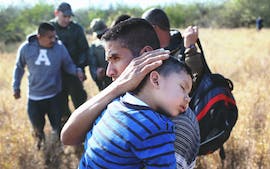 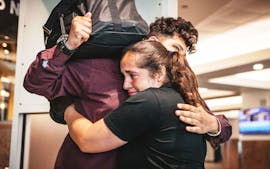 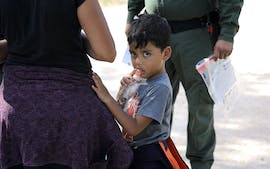