In a he-said, she-said, neither-should-have-said exchange that escalated into a public fight, Lieutenant Governor Dan Patrick on Tuesday stripped Amarillo senator Kel Seliger of the chairmanship of the Senate Agriculture Committee after barring the maverick Panhandle Republican from a party caucus meeting and declaring that the senator had made “lewd” comments about one of Patrick’s staffers.

The battle between the senate’s president and one of its more outspoken moderate Republicans played out following news Friday of Patrick’s committee assignments for the 86th Legislature. Seliger had been the longtime chairman of the Senate Committee on Higher Education. Patrick not only relieved him of chairmanship of that committee, but removed him from the committee entirely. Patrick also removed Seliger from the influential Senate Finance Committee. The move by Patrick was viewed by many as political retribution by the lieutenant governor against an outspoken moderate senator.

Patrick’s committee assignments last week raised questions by West Texas officials about that region’s significance to the lieutenant governor. Seliger spoke candidly with Texas Tribune reporter Emma Platoff. “It’s not what I desired,” Seliger told Platoff. “There’s a negative reaction in this district, because [the finance committee] is a good position to try and do the things that are important in an area in West Texas that seems to have to fight for everything, from a budgetary point of view. I know exactly what motivated the change. It was a couple of ‘no’ votes for the lieutenant governor’s priorities in 2017. It was a very clear warning to the Republicans that if you get off the reservation, you better be careful.”

In response to Seliger’s comments, Patrick adviser Sherry Sylvester told Platoff, “If Senator Seliger believes serving as Chair of the Agriculture Committee—a critical committee for West Texas and all of rural Texas—is beneath him, he should let us know and the Lt. Governor will appoint someone else.” Platoff quickly tweeted the exchange:

"If Senator Seliger believes serving as Chair of the Agriculture Committee — a critical committee for West Texas and all of rural Texas — is beneath him, he should let us know and the Lt. Governor will appoint someone else," a senior advisor to Lt. Gov. Patrick tells me #txlege

At least one member of the tradition-bound Texas Senate said it is highly unusual and inappropriate for a staff member to publicly criticize a member of the Senate, a feeling that Seliger seemed to share. On Monday, speaking on a Lubbock radio station, Seliger responded to Sylvester’s comments by saying, “I have a recommendation for Ms. Sylvester and her lips and my backend.”

State Sen. Kel Seliger, R-Amarillo, was just trying to head to a meeting with other Republican members of the Senate when Lt. Gov Dan Patrick stood at this door and told him: “I didn’t invite you to this meeting.” pic.twitter.com/UzSKDU0OtF

Within hours of the tweet, Patrick’s office announced that Patrick was stripping Seliger of his chairmanship of the agriculture committee.

“Senator Seliger has been removed as Chair of the Senate Agriculture Committee and will not be serving on that Committee,” Patrick said in a release. “I met with Sen. Seliger earlier today and gave him an opportunity to apologize for a lewd comment he made on radio about a female staffer that has shocked everyone. He had 48 hours to apologize, but failed to do so. He has refused to take responsibility and outrageously, blamed the staffer and said she should be fired. To not be willing to apologize and suggest, somehow, that she had it coming is unimaginable. I will appoint a new Agriculture Committee chairman shortly.” 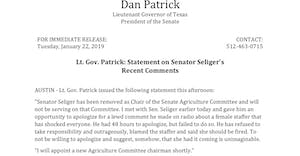 Seliger responded late Tuesday expressing disappointment at losing the chairmanship and regret at attacking Patrick’s aide. But he remained defiant, declaring Patrick’s actions had nothing to do with Seliger’s comments, but with Seliger’s failure to support Patrick last session on the controversial bathroom bill and private school vouchers.