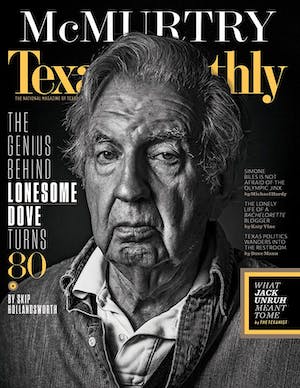 One Friday in May—Friday the 13th, no less—Lieutenant Governor Dan Patrick convened a press conference in Dallas to discuss the latest threat to Texas. That morning the Supreme Court of Texas had issued a decision in the largest school-funding lawsuit in state history. About half the school districts had sued the state—more than six hundred in all—claiming that the Legislature wasn’t meeting its constitutional obligation to educate Texas kids. The case had dragged on for nearly five years, and many experts who follow education policy had expected a far-reaching opinion that might reshape how Texas funds its schools. The court had finally weighed in, and here was Patrick, the state’s most vocal elected official, if not the most influential, to discuss it.

The superintendent of schools in Fort Worth had recently decreed that transgender students would be allowed to use the restroom or locker room that corresponded to the gender with which they identified. Patrick had responded, in a series of well-timed appearances all over the Metroplex, by labeling him a dictator and calling for his resignation. The Obama administration had issued a similar edict to all public schools nationwide. To Patrick’s mind, this was a moral outrage that could cause parents across the country to pull their kids, especially girls, out of public schools: “I believe it is the biggest issue facing families and schools in America since prayer was taken out of public school.”

That’s a depressing statement. Whatever you think of the Great Bathroom Debate, it seems little more than another passing skirmish in the never-ending culture war. It certainly isn’t “the end of public education,” as Patrick predicted. Meanwhile, the school finance ruling that Patrick so easily glossed over will have profound consequences for millions of children for years to come.

Perhaps the politicians will respond when they feel some public pressure. The school finance ruling was met with little popular outrage. We’ve seemingly become accustomed to the notion of underfunded schools, one of those intractable problems that never get much better despite occasional reform efforts and repeated assurances from politicians that nothing is more important than education and our kids; Governor Greg Abbott campaigned on that very issue in 2014. The latest round of litigation was the seventh time Texas school districts had sued the state since 1989, and though the previous cases did lead to some improvements, the same basic failings remain. So it’s hard not to be cynical about the chances of reforming underfunded schools. For twenty years, The Simpsons has made a running joke of it. We’ve seen the show’s elementary school staff cut costs by using old gym equipment to make meat loaf—“There’s very little meat in these gym mats,” complains Lunch Lady Doris—renting out school rooms to house prisoners, and replacing the milk in the cafeteria with something called Malk (“Now with vitamin R!”).

Yet there’s little doubt that education—and how to pay for it—remains the most critical issue facing Texas. And right now, it’s not looking good. For one, the business of educating Texas’s more than 5 million public school students is growing ever more expensive. The system is adding about 80,000 kids each year, many of them classified as economically disadvantaged, meaning they qualify for free or reduced-cost lunches. Kids from such poor families now compose about 60 percent of Texas public school students, a substantial increase in the past decade. Students from poor families are, in general, much more expensive to educate. One study found that three-year-olds from economically disadvantaged families knew on average six hundred fewer words than wealthier kids. At the same time, the number of students for whom English is a second language—who are also more expensive to educate—is growing as well.

And state spending isn’t keeping up with the need. Funding has remained relatively flat and has even declined slightly. Texas spends about $300 less per student, when adjusted for inflation, than it did in 2003. Because most of the money comes from property taxes, there are still wide disparities between poor school districts and wealthy ones. No one’s advocating for exact equality—rich districts will always have more money—but the gap remains too large. The bottom line is that poorer districts have a more expensive educational task and fewer resources with which to do it.

Meanwhile, the state has been asking schools to do more with less money, by raising education standards and implementing a more stringent standardized test—the State of Texas Assessments of Academic Readiness.*

Given these trends, it wasn’t surprising that after the Legislature sliced $5.4 billion from school funding in 2011, hundreds of districts sued. (Lawmakers did add about $3 billion back into the system two years later, though many districts still claimed they were underfunded.) The Supreme Court’s finding that the system “meets minimum constitutional requirements” surprised many experts and elected officials. In fact, legislators had claimed they needed to delay school finance reform because they were waiting for the court to tell them which parts of the system would need to be fixed. But the court refused to play along.

In its decision, written by Justice Don Willett, the court puzzles over how much money the state must dispense to meet the subjective standard of “constitutional,” especially given that policy experts have recommended varying levels of spending—and some experts say that simply handing out more money won’t solve anything. And that’s true: money alone doesn’t guarantee good schools, though it is a necessary ingredient. The justices essentially threw up their hands, declaring that the proper forum for such debates is the Legislature. “[W]e decline to usurp legislative authority by issuing reform diktats from on high, supplanting lawmakers’ policy wisdom with our own,” Willett writes. Still, the decision describes in stark terms the challenges facing schools. Texas students “deserve transformational, top-to-bottom reforms that amount to more than Band-Aid on top of Band-Aid. . . . We hope lawmakers will seize this urgent challenge and upend an ossified regime ill-suited for twenty-first century Texas.”

That ideally is how it should work—the Lege should make the policy, not the courts—but it never happens that way. The Legislature rarely takes on a difficult topic voluntarily; nearly every major recent reform in Texas was passed only after a state or federal court mandated it, including overhauls of the prisons and institutions for the mentally disabled. Every major school reform was also preceded by a court order, including the creation of the so-called Robin Hood system, which has helped equalize funding by requiring richer districts to send money to poorer ones. Robin Hood is far from perfect, and though it was originally intended as a short-term fix when it was instituted, in 1993, Robin Hood has never seriously been revised.

School finance is the brussels sprouts of public policy, and lawmakers have little appetite for it. That’s unlikely to change when the Legislature reconvenes next year. For one, hardly any lawmakers actually understand the school funding system—“the word ‘Byzantine’ seems generous,” as Willett put it—and the two who knew it best, Democrat Scott Hochberg and Republican Jimmie Don Aycock, have either retired from the Legislature (Hochberg) or are about to (Aycock). Neither will be around in 2017. And, worse, any major reform will likely require billions in new spending (at least $3 billion by some estimates), money that the Legislature simply won’t have. Thanks to the end of the oil and gas boom, most analysts expect the state to face a budget shortfall in 2017.

It’s long past time for lawmakers to reform school funding; they just don’t have the will or the money to do it. It’s so much easier—and politically more beneficial—to talk about who’s using which restroom.

If you needed proof of that, Patrick offered it in his press conference when a reporter asked him whether the Texas Senate, of which Patrick is president, would move to reform school funding next year.

Patrick looked as if he’d swallowed something unpleasant: “School finance is a very difficult issue, because we have twelve hundred school districts, eighty-five hundred schools, three hundred thousand teachers, thousands of principals. It’s very complex. School districts are different all over the state. . . .  It’s a very complicated system. But the Supreme Court today said what we have been doing is constitutional. The six hundred school districts who sued lost. And we’ll continue to work. And I’ll continue to work. Look, I’m a big public-education guy. Everybody knows that. I’m passionate about public education. I just believe we have choices: for public schools and charter schools and home schools. But most of our kids—at least until Obama last night—most of our kids are going to be in public schools, and we have to get it right. But it’s a complex system.”

We have to get it right. If there’s one statement everyone on all sides of the education debate would agree with, it’s that. The schools are growing fast, increasingly filling with less affluent kids of Latino descent. The future of our workforce, our economy, and our state depends on ensuring those kids are reasonably well educated. But how exactly do we get it right? And how do we pay for it?

The next question at the press conference was once again about restrooms, and Patrick gleefully dived back in. “One of the things that really bothered me about the superintendent, and now the president—we are now in the last couple of weeks of school. Kids are trying to graduate. Kids are trying to take their finals. Kids are trying to pass the courses. This is such a distraction to the teachers and the kids and the parents. So disruptive.”

Too many Texas schools are failing our kids, and the Supreme Court has let Patrick and his fellow elected officials off the hook for their lack of political will to address an issue that could endanger the future of the state. Someone was indeed trying to distract teachers, students, and parents, but it sure wasn’t Obama.