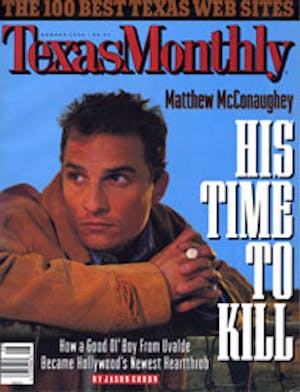 WHEN IN DOUBT, DELAY: That appears to be the motto of Democrats and Republicans alike when it comes to the Barton Springs salamander, whose lone habitat is Austin’s Barton Springs Pool and two adjacent springs. The tiny quadruped has been waiting for nearly eighteen months for the U.S. Fish and Wildlife Service to decide whether it will be added to the endangered species list. Now it’s going to have to wait a bit longer. In late June, officials of the U.S. Interior Department (which oversees Fish and Wildlife) asked a federal judge to give them several months more to make a final decision.

The reasons for the salamander’s long wait have nothing to do with the salamander, of course, and everything to do with development. Republicans don’t want to add it to the endangered species list for fear that commercial projects and highway construction could be restricted in 354 square miles of southern Travis and northern Hays counties. Listing the salamander “would affect land-use decisions and private property rights and values” in its habitat, says U.S. senator Kay Bailey Hutchison. Democrats, meanwhile, believe a listing would provide election-year ammunition for Republicans beating the drum on property rights. “Political considerations have entered into everyone’s posturing on the issue,” says Michael Bean of the Washington, D.C.—based Environmental Defense Fund.

One of more than 240 species currently awaiting federal protection, the salamander has been a hot topic in Austin and Washington since January 1992, when two Austin scientists petitioned Interior Secretary Bruce Babbitt to protect the animal, which they say is critically endangered. But last year, Governor George W. Bush persuaded Babbitt to delay his decision for six months, and Hutchison pushed a measure through Congress that prevented listings for eight months more. Bush—who favors a plan to have the state, not the feds, protect the salamander—has said the listing decision should be “based upon science, not some hysterical read by a well-meaning citizen.”

Some scientists, however, say it deserves federal protection. Appearing on a panel convened last fall by the Texas Parks and Wildlife Department, University of Oklahoma zoology professor Victor Hutchison called the salamander “one of the most endangered vertebrate species in North America, if not the most endangered.” He reiterated that sentiment to me in June: “I’ve asked and looked and found nothing else that comes close.” Hutchison added that the salamander’s slow reproductive cycle and small population—City of Austin biologists found only two dozen in a survey this summer—make it highly vulnerable.

The courts will likely force a decision this summer; in early July, federal judge Lucius D. Bunton III of Midland ruled that Babbitt must act no later than August 30. And Austin’s most vocal environmental group, Save Our Springs, has sued Interior, alleging that the agency is violating the Endangered Species Act by not protecting the salamander. But if Babbitt has his way, delay will carry the day. That way, he can decide the salamander’s future after voters have determined President Clinton’s.