He was once called the best entertainment in the Capitol; he was a short, firebrand liberal Democrat who took on the conservative wing of his party with an oratory skill that could eviscerate his rivals and a temerity that allowed him to get away with renaming himself not once but twice during his lifetime.

A. R. “Babe” Schwartz, a former Texas state senator, a former state representative and a former lobbyist who was considered a leader of the liberal cause, a pioneer on environmental legislation, and the father of the Open Beaches law, died at his home in Houston on Friday of a heart attack. The 92-year-old, whom everyone in the Capitol knew as “Babe,” had been in hospice care, said his son, John.

“Having grown up poor on Galveston Island, he was fiercely committed to preserving natural beauty and making sure everyone could enjoy it,” John wrote of his father. “He told the magazine Texas Shores in 2002 that, coming from the island, ‘If you don’t develop a love of the beach, you must be sick or puny.’ ” When he was 89, Galveston city officials named a fifteen-block stretch of beach “Babe’s Beach.”

Beyond his environmental positions, Schwartz was an advocate of civil rights, especially desegregation, at a time when such stances in Texas were not popular. He also advocated for open government, education, and services for the mentally challenged.

Perhaps his greatest renown came in 1979, when he was one of a dozen state senators who came to be known as the “Killer Bees” that brought the Legislature to a standstill when they hid out and denied the upper chamber a quorum so that it could not conduct business, in protest of legislation to change the date of the presidential primary in Texas. In doing so, Schwartz and the Killer Bees took on Lieutenant Governor Bill Hobby, who gave the group its name because “you never know where they’re going to hit next.” Hobby would later admit that the bill that caused the Killer Bees to take flight and bring the Senate to a halt was a bad bill. The Killer Bees said the legislation was aimed at helping the presidential aspirations of Democrat turned Republican John Connally.

Schwartz was named to Texas Monthly’s Ten Best Legislators four different times, tying the record for that accolade. When he was named to the Best list in the 1977 session, Texas Monthly said he “Unsheathed a little-used weapon in a politician’s arsenal—the ability to discern right from wrong—and flailed his colleagues for their failure to do the same. Respected but not revered by the bland, colorless younger generation of senators: he will always be someone who alienates one side when he speaks out and another when he doesn’t.”

Aaron Schwartz was born in Galveston on July 17, 1926. The younger of two sons, his family called him “Baby” until he was fourteen, he said, when he threw a tantrum insisting he no longer be called that. His family began calling him Babe, marking the first time he renamed himself.

After high school, Schwartz attended Texas A&M before enlisting in the Navy during World War II. His parents had given him no middle name, and Schwartz said he soon grew tired of filling out the military forms with “NMI” for “no middle initial.” He said he briefly considered Steven as a middle name, until he realized that his initials would spell ASS. So he began filling out his middle name as Robert, renaming himself a second time.

Following his military service, Schwartz attended law school at the University of Texas at Austin and began working as an aide in the Texas Legislature. Around this time, he met his future wife, Marilyn Ruth Cohn, at a dance. Cohn later said that, mid-dance, her future husband showed his penchant for brutal honesty when he walked away, saying, “You don’t dance worth a damn.” 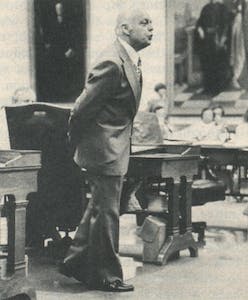 Schwartz was elected to the Texas House in 1954 and 1956. Then he won a seat in the Senate during a special election in 1960. He served in that chamber until he was defeated during the 1980 Republican sweep led by Ronald Reagan. The man who beat him, James “Buster” Brown, was recruited to run by a then-29-year-old political operative named Karl Rove.

He continued as a lobbyist well into his eighties, enduring several health challenges. According to his son, once, during the nineties, Schwartz was in the emergency room speaking with the doctor when he fell unconscious mid-sentence and flatlined, effectively having died. His doctor revived him, and Schwartz regained consciousness—and finished his sentence.

Following one of two strokes, Schwartz had brain surgery and began telling people, “My doctor said I didn’t have enough of my brain to practice law, but it was alright to lobby.”