The headlines out of Houston are mostly doom and gloom as oil prices continue their downward trend—as of Wednesday, it’s below $45 a barrel. That has implications for the short-term health of the energy economy, but it also has more immediate implications for consumers at the gas pump.

That $45-a-barrel oil price comes on the back of gasoline stockpiling, the result of decreased demand in the winter months (which was low because gas prices were higher than normal). Now, however, with stock high, the prices have fallen to the lowest they’ve been for the summer travel season since 2005.

Touring through Texas via the gas-prices website GasBuddy.com, we can see just how low the average price of a gallon is in various parts of the state. 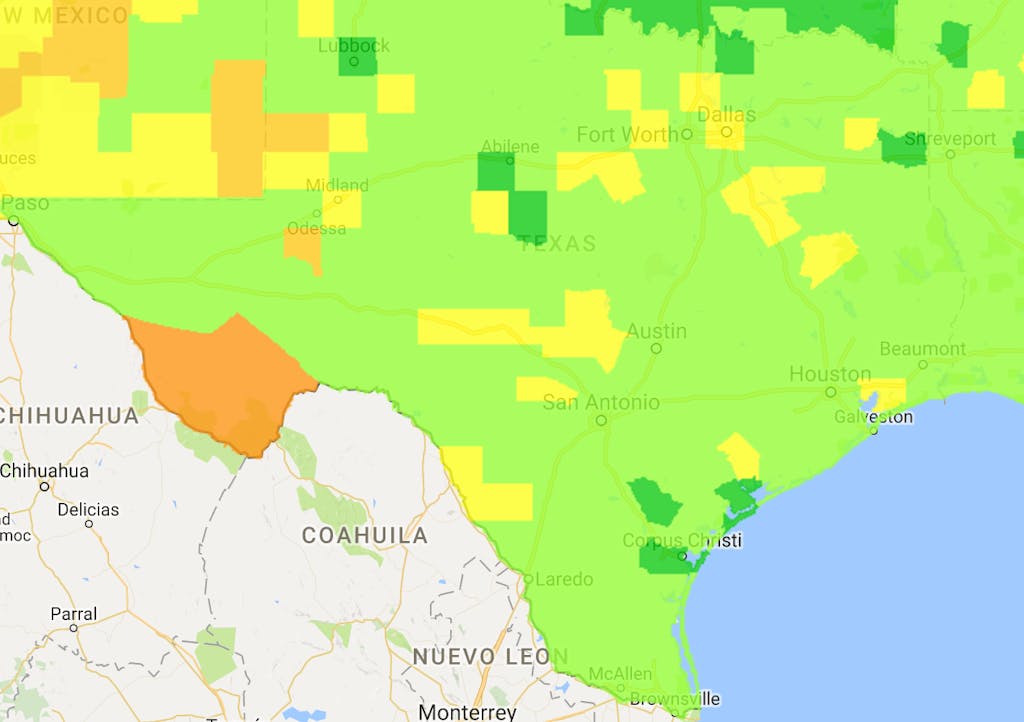 Looking at the map (where green is cheap), it’s apparent that Texas is enjoying some pretty low gas prices at the moment. The national average right now of $2.31 a gallon is significantly higher than Texas’s, which is $2.13. (It’s higher than they’ve got in the southeast, though, where Mississippians enjoy an average of $2.04 a gallon.) And there’s not a huge swing in prices throughout the state—barring the Big Bend area, where prices hover closer to $2.50 a gallon.

In most of the state, though, things are nice and cheap. In Austin and El Paso, the price hovers around $2.15, in Houston it’s about $2.10, and in San Antonio, it’s $2.05. Prices are even better as you move down the Gulf Coast, where gas is just over $2.00 a gallon. Which means that if you pick this weekend to go to the beach, you’ll be in great shape when you gas up on the way home.

All of this is interesting, and it suggests that now is a pretty good time to do a little bit of summer traveling—but if you’re expecting the trend to last, we wouldn’t bank on it. The prices are low right now because supply is high, but there’s nothing in consumer behavior over the summer to suggest that the demand for gasoline has actually changed, absent higher prices that corresponds with increased production (like we saw over the winter). So the odds are that drivers over the next few weeks will use a lot of the existing stockpile to take advantage of the low prices and the nice weather—relatively, it’s hot—which means that this surplus is likely to balance out in the end.