Today, we’re continuing our “Get to Know a Swing District” series with a look at Texas’s Twenty-third Congressional District. 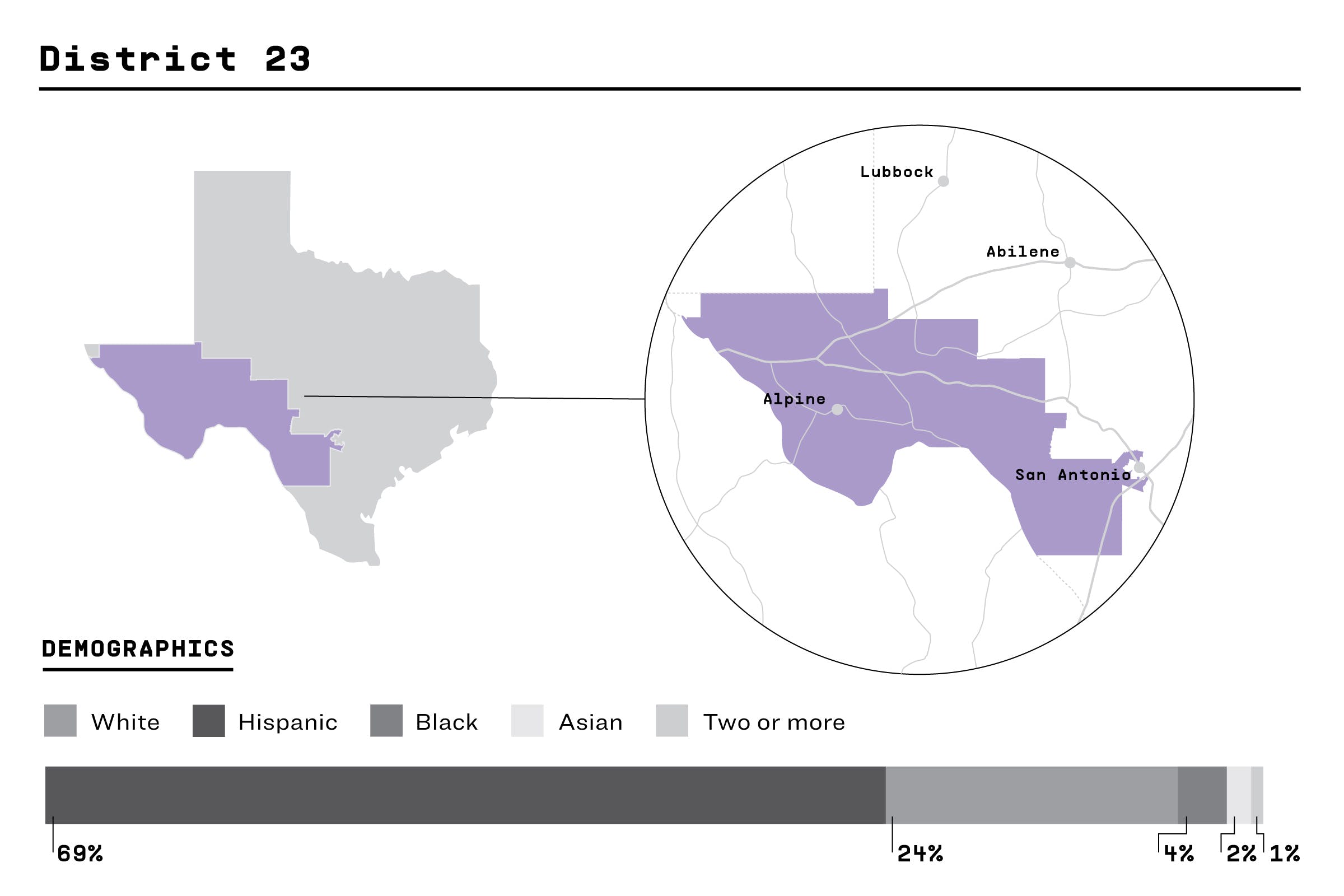 For most of the past decade, TX-23 has been the only regularly competitive district in the entire state. After the U.S. Supreme Court overturned parts of the redistricted Texas map in 2006—including TX-23—and popular San Antonio Republican Henry Bonilla lost the seat, it has alternated between Democrats and the GOP. Democrat Ciro Rodriguez held it for two terms from 2006 to 2010, Republican Quico Canseco claimed the seat in the first Obama-era midterm, and Democrat Pete Gallego won it back in 2012. The district’s current representative, Republican Will Hurd, who is retiring, won the seat in a narrow 2014 race, and has retained it in two consecutive close elections.

Picture the outline of Texas in your head, and then slice off the bottom left quarter—that’s pretty much the shape of the Twenty-third. The district stretches a whopping 520 miles from its western edge in Tornillo, just outside of El Paso, to the southeast side of San Antonio. Unlike some of Texas’s sprawling districts, TX-23’s massive, oblong shape is less a matter of gerrymandering (although there’s some evidence of that in how it slices up San Antonio) and more a matter of needing to create a district for the rural, sparsely populated parts of southwest Texas. Because congressional districts each need to represent a similar number of citizens, the district packs the infamous Sierra Blanca Border Patrol checkpoint and the art hippies in Marfa in with the wind farms in Fort Stockton and the Toyota Tundra plant on San Antonio’s South Side. 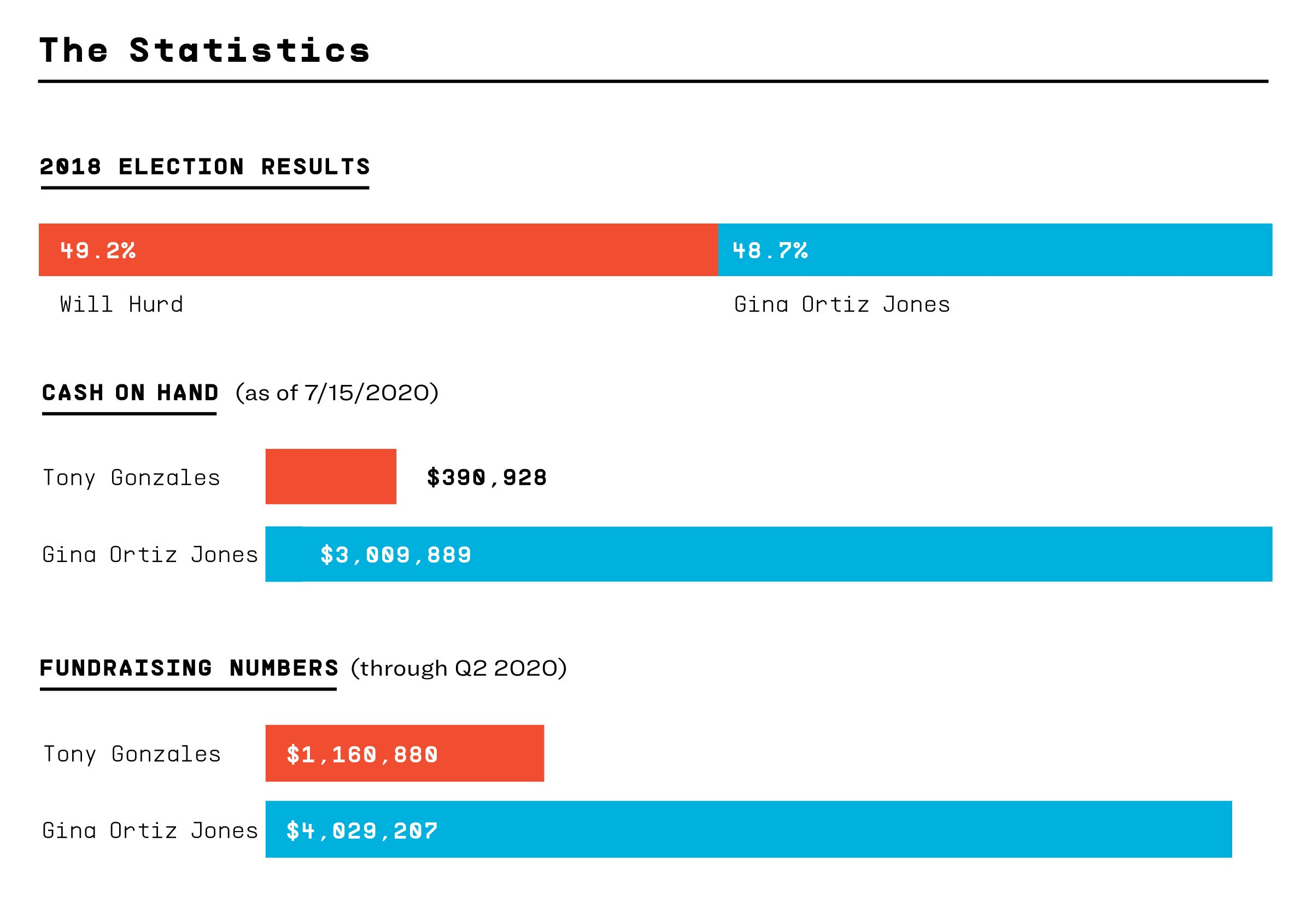 Gonzales, a Navy veteran and cybersecurity professional, had clear intentions to run for Congress this cycle even before the TX-23 seat opened. In 2019, Gonzales announced his candidacy for Texas’s Thirty-fifth District, a Democratic stronghold representing the bluest parts of Austin and San Antonio that has only ever been held by popular incumbent Lloyd Doggett since the district was drawn in 2013. It likely would have been a quixotic challenge for Gonzales to mount—but Hurd’s retirement opened up a vacancy in a district where the GOP had a better shot. Gonzales entered a crowded nine-candidate primary, earned Donald Trump’s endorsement, and survived a two-candidate runoff against the Ted Cruz–backed Raul Reyes. It was one of the closest (and ugliest) runoffs you’re liable to find—Gonzales won the nomination by just seven votes. (Feel free to cite this result to any friends who say they don’t turn out because their vote doesn’t matter.) He emerged to take on Gina Ortiz Jones, who had lost a close 2018 race to Hurd.

Despite TX-23’s status as a swing district, Gonzales isn’t running as a centrist. In lieu of an “issues” page on his campaign website, he lists “values,” where he lays out  conservative principles: He’s “100% pro-life” and declares Roe v. Wade a “flawed decision,” backs charter schools, and supports a border wall “where appropriate.” While other Republicans in close races have run away from the president, Gonzales has embraced Trump, who told GOP primary voters in the Twenty-third in his July endorsement of the candidate that “by working for you, he’s working for me.”

Gonzales has proven to be a strong fund-raiser—he’s taken in $1.2 million in contributions through the second quarter of 2020—but the primary left him with less than a third of that available as cash on hand for the general election. And his opponent is one of the fund-raising juggernauts of the current Democratic cycle.

In her first run for the seat in 2018, Jones, an Air Force veteran, came within one thousand votes of unseating Will Hurd. The former U.S. intelligence officer was an appealing candidate for Democrats in the district, and she announced her candidacy for the seat again before Hurd’s retirement. If she wins, she’d be the first Filipina American representative in Congress, and the first openly gay member of the Texas delegation. She received endorsements from influential organizations—labor unions, veterans’ orgs such as Vote Vets, LGBTQ groups, and progressive groups including one backed by presidential hopeful Elizabeth Warren—and won a five-candidate primary by 55 points. Her politics reflect the broad coalition that supports her. On immigration, she’s pro-DACA and anti-wall, while also declaring that “our nation’s border security cannot be compromised.” She favors a public option for health care instead of Medicare for all, and frames climate change as a national security issue.

When Hurd announced his retirement, Jones became a fund-raising behemoth. As of the second quarter of 2020, she’s raised more than $4 million, with $3 million of that still on hand for the race against Gonzales.

The Twenty-third is the best pickup opportunity the Democrats have in the entire state. It nearly flipped in 2018, and now the centrist, party-bucking incumbent isn’t on the ticket. Notably, Hurd, who just eked by in 2018, became more popular in his district than either his party or the president—Hillary Clinton won there by 3.4 points in 2016, while Beto O’Rourke took it by 5 points over Ted Cruz two years later. That performance will be difficult to match for a Republican new to the district—especially one who more closely aligns with Trump.

Gonzales’s polling from August showed him narrowly behind in the race, mirroring what a previous independent poll, conducted before he had secured the nomination, found in May.

Gonzales has Hurd’s endorsement, which may carry more weight with voters than analysts think. If the presidential election boosts turnout for the GOP more than for Democrats, and enough voters in the district see Gonzales as a continuation of Hurd’s pragmatic approach to politics, rather than someone “working for” Trump, the Republican candidate could pull out a squeaker.

TX-23 is trending blue, and Democrats have the candidate they wanted. She’s well funded and doesn’t have to face an incumbent. The Cook Political Report lists the district as “lean Democratic.” If Democrats don’t flip the seat, they’re probably in for a bout of soul-searching as they try to figure out what it’ll take for them to succeed in Texas.