Ann Harris Bennett, the Democratic Harris County tax assessor-collector and voter registrar, may have violated federal election law earlier this month by sending letters to thousands of county residents challenging their voter registration status. The National Voter Registration Act of 1993, commonly known as the Motor Voter Law, requires state officials to complete all programs designed to purge voter rolls at least 90 days before a federal election. The only exceptions are for a voter’s death, felony conviction, or self-removal from the voter rolls.

Last week, Houston photographer Lynn Lane received a letter from Bennett—dated August 15 and 83 days before the election—informing him that her office “has received information that your current residence is different from the residence on your registration record.” It goes on to warn that if Lane does not return an enclosed voter registration address confirmation form within 30 days, his registration “will be canceled in Harris County.”

David Becker, the founder of the Washington, D.C.–based Center for Election Innovation and Research and a former attorney with the Department of Justice’s Civil Rights Division, said the letter was clearly improper. “Federal law says any voter list maintenance program has to be suspended 90 days before a general election, which this was well within.” (Bennett’s office did not return multiple requests for comment.) Becker said the violation is not considered criminal in nature, but it would be enough to persuade a judge to order that the purge be stopped.

Bennett has said that she was forced to act because of a challenge filed by Republican activist Alan Vera on July 30 disputing the voter registration status of approximately 4,000 Harris County residents. Vera filed the challenge under a Texas state law that allows any registered voter to challenge the registration of another voter living in the same county. The registrar is then required to send a letter to the voter(s) being challenged, giving them 30 days to prove the legitimacy of their registration.

However, by the time Bennett’s office sent out the letters it was already within the 90-day blackout window before the November 6 midterm election. Compounding the mistake was the fact that around 1,700 of the 4,000 challenged voters, including Lane, had their registrations immediately suspended. At a news conference Thursday morning, Bennett blamed the suspensions on a software error and said that all the voters had been restored to full voting status.

Under state law, residents with suspended voter registrations can still vote as long as they provide a county address at the polling booth. Even Vera, the person who filed the original challenge, agreed that Bennett was wrong to threaten to “cancel” the registrations of voters who didn’t reply to her letter within 30 days. “That’s a problem,” he said. “That’s not accurate, and that’s not legal. Your registration cannot be canceled that way.”

In April, a federal judge in San Antonio ruled that the state was violating this same federal law because it was failing to offer residents the opportunity to register to vote online when renewing a driver’s license. That ruling has been appealed by the state.

Democratic lawmakers, including Congresswoman Sheila Jackson Lee, have criticized Vera’s original challenge for allegedly targeting poor and minority neighborhoods. Vera denies the charge, saying he compiled the list of 4,000 names by looking for people who had listed P.O. boxes, post offices, businesses, churches, or other non-residential addresses on their voter registration. An examination of Vera’s list, which he provided to Texas Monthly, shows that he challenged voters from all over Harris County, although the highest number of challenges (192) were filed against residents in zip code 77002—downtown Houston—where a large homeless population lives. (Although homeless people can register to vote, they are required by the state to say where they are living, even if it’s just “under the I-45 bridge.” Giving only the address where they receive mail is insufficient, according to a strict interpretation of the law.)

Lane, the Houston photographer, lives in the Third Ward neighborhood and said he was wrongly targeted by Vera’s challenge. “I’ve lived at my address for five years. I vote in every election, every primary, every bond issue. It didn’t make any sense.” And despite Bennett’s claim to have restored all affected voters to full voting status, Lane said that the Texas Secretary of State’s website still listed his registration as “suspended” as of Thursday evening.

“This is exactly the situation that that clause in the National Voter Registration Act was designed to prevent—that this close to an election, someone would attempt to influence the outcome by challenging voters who might vote in a particular way,” said Becker, the election lawyer. “Not only should that letter not have gone out, it certainly shouldn’t have resulted in the suspension or deactivation of voter registration. I don’t know how that could have happened.” 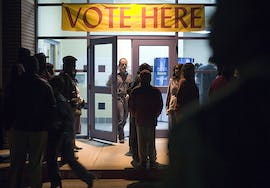 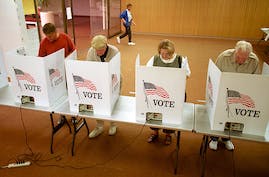 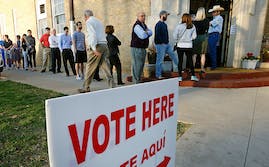