In the past week, 10,000 more Texans tested positive for COVID-19. Over that same period, the number of tests for the virus declined throughout the state compared with the previous week. Those are just two data points released over the weekend that should serve as a reminder to Texans that the virus is still very much spreading, even as the governor continues to reopen the state and thousands are protesting in the streets.

In monitoring the pandemic, Texas focuses on two key metrics: the “positivity rate,” which is the percentage of new tests that come back positive for the virus; and the number of hospitalizations, which help us understand whether Texas hospitals are at risk of being overwhelmed. On both metrics, the trends are moving in the wrong direction. Hospitalizations are going up, and the seven-day rolling average for the positivity rate (a way of measuring that smoothes out spikes in the data) has jumped three percentage points from where it was a week ago. Also troubling: the number of tests conducted in Texas has been stuck in neutral for several weeks, hovering around 20,000 or so per day, and the testing capacity is actually down from where it was in the second week of May, despite Governor Greg Abbott setting a goal of 30,000 per day.

Even on Monday, which saw a low number of reported positive tests, Texas also saw its highest number of COVID-related hospitalizations yet. 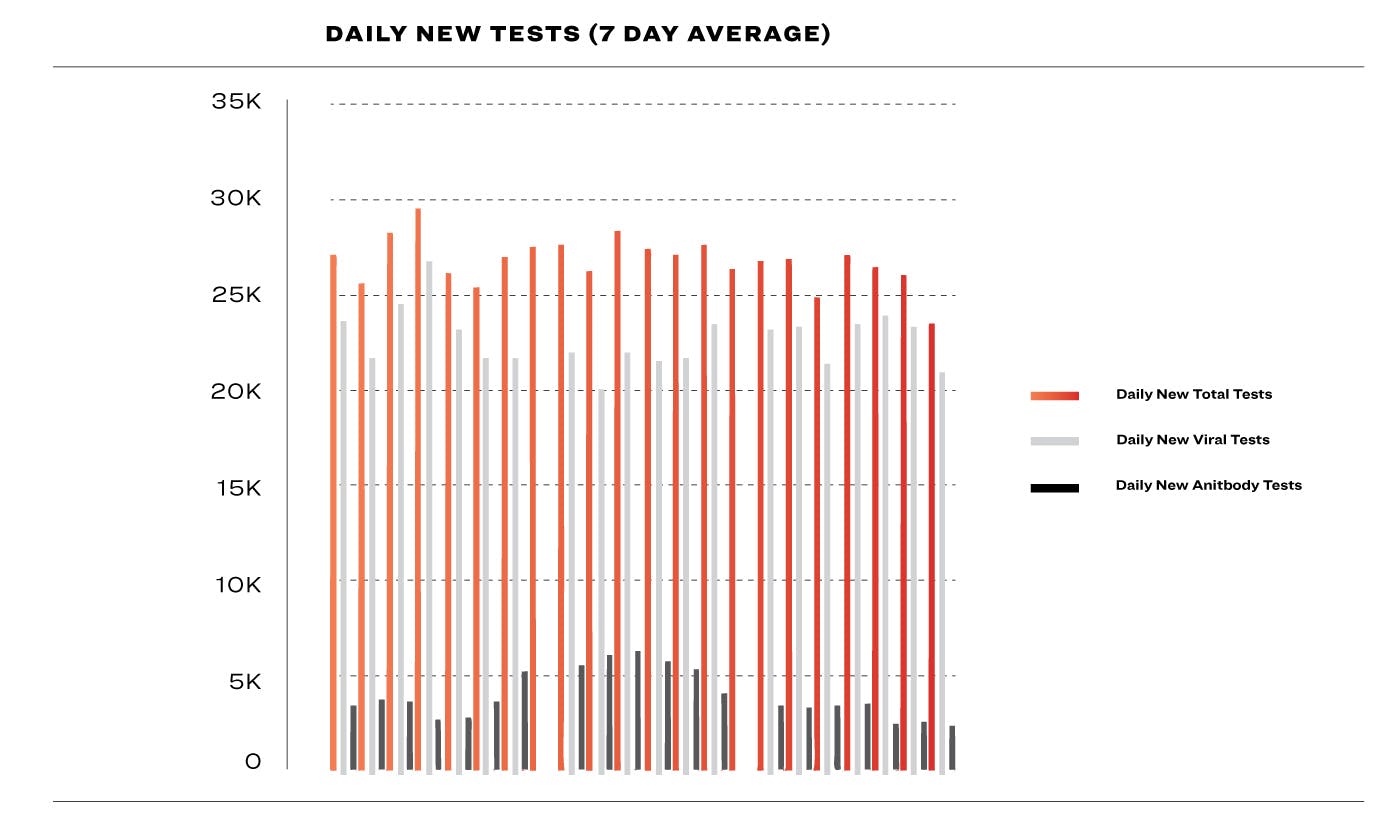 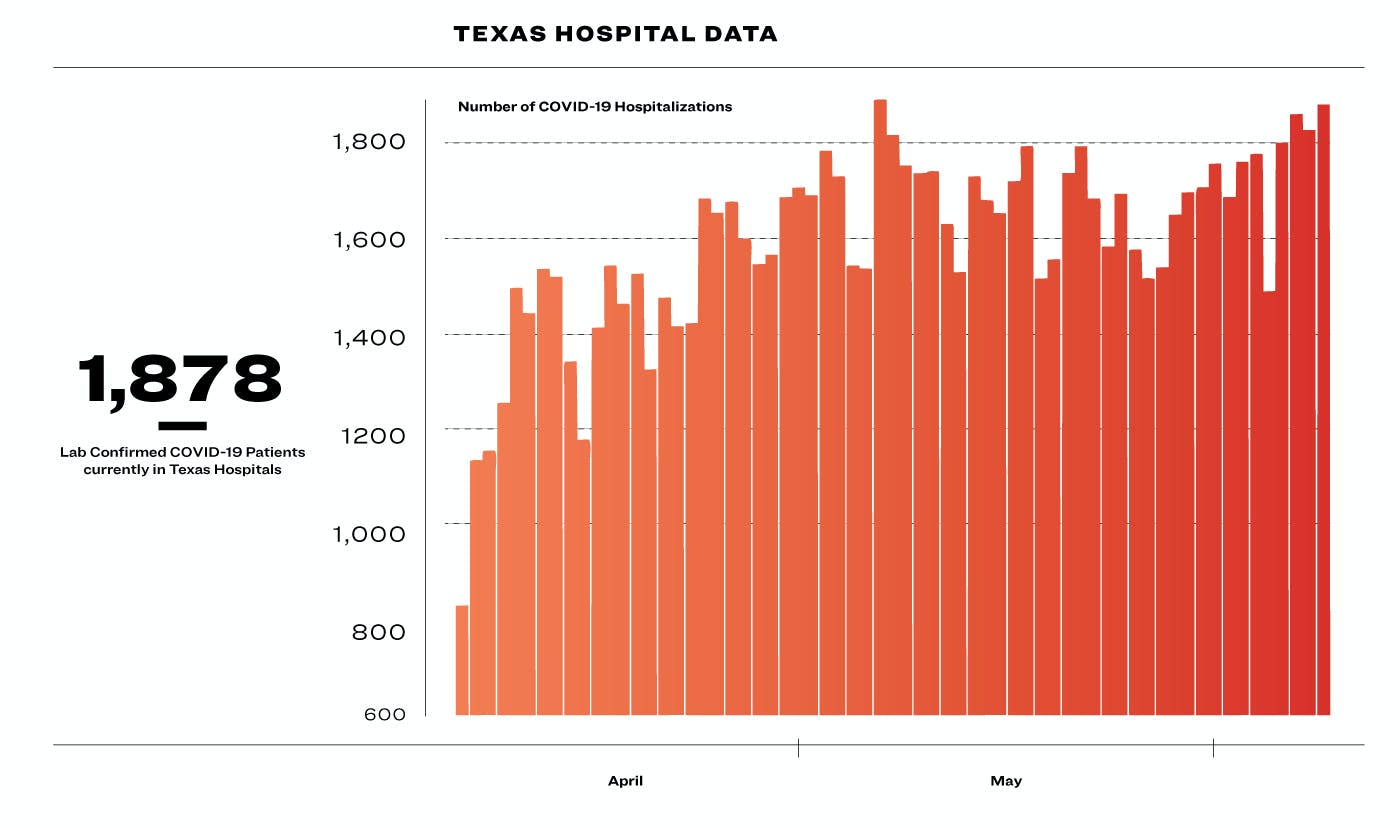 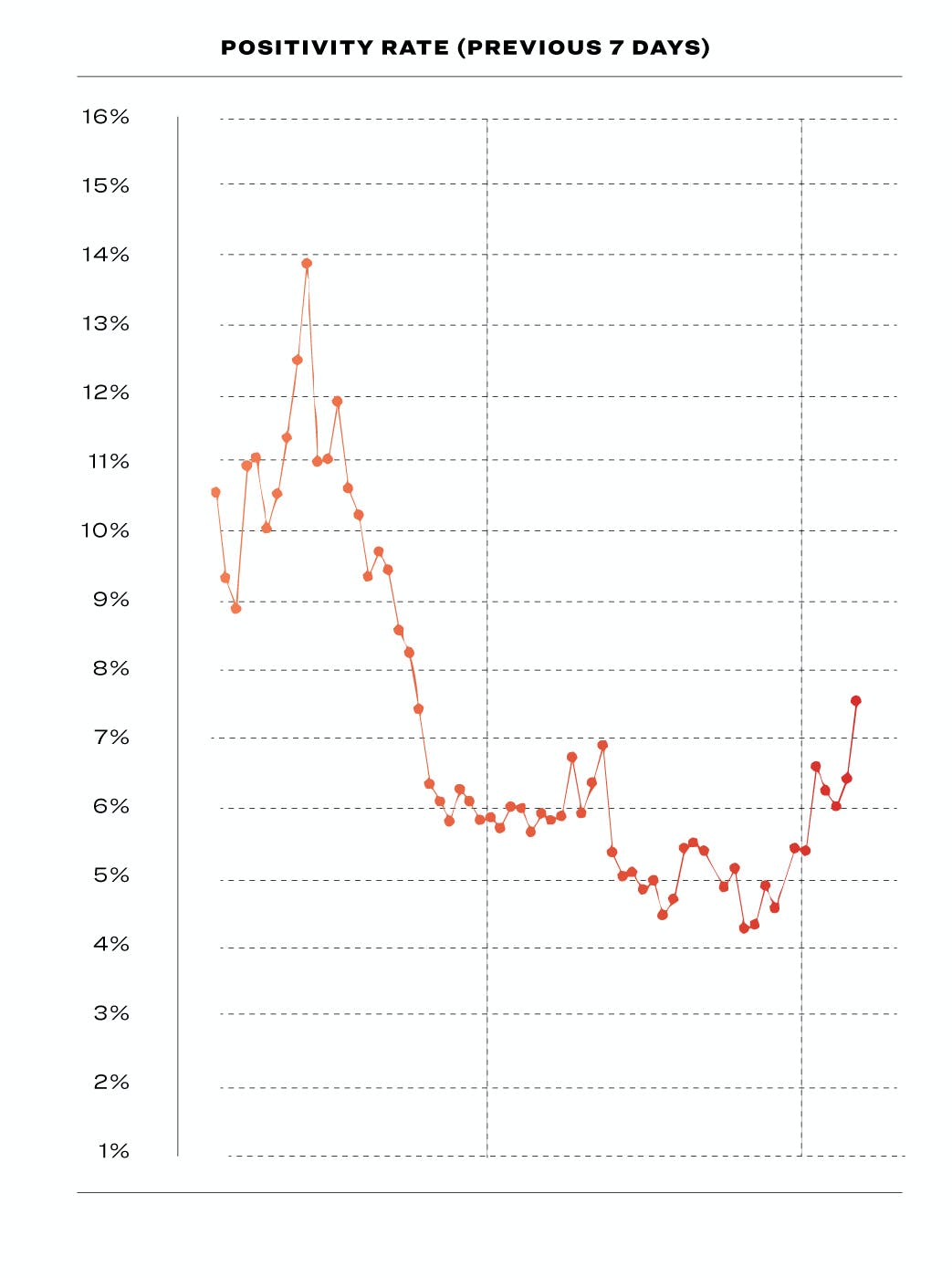 For much of the pandemic, Texas has been an unlikely outlier, compared with places like the Northeast or California. Though the disease has spread across the state and killed more than 1,800 people, the rate of spread has been slow enough that leaders have been comfortable relaxing public safety measures. (Last week, Governor Abbott declared that bars could expand their seating capacity to 50 percent, and that amusement parks could reopen.) That’s always been a gamble—but with a growing number of new cases, increasing hospitalizations, insufficient testing, and sustained large-scale gatherings, it’s harder and harder to feel good about the odds.

One thing to keep in mind: the increase in number of cases we’re seeing right now almost certainly doesn’t include the impact of the protests across Texas that began after George Floyd’s death. It takes anywhere from four to eleven days from exposure for people to begin exhibiting symptoms, plus anywhere from three to seven days for lab results to come back, and that’s if people are calling their doctor and able to get tested the first time they cough. More likely, these numbers correspond with the reopening that began unfolding throughout the month of May, and are inclusive of the increase in activity around Memorial Day weekend. That’s not to say that the protests won’t help spread COVID-19—just that we’re more likely to see the effects in another week or two.

There are still lots of unknowns. Are we watching the early part of a second wave of infections? The current understanding of how the virus spreads suggests that indoor settings are significantly higher-risk than outdoors, so does that mean that protesters (at least those who didn’t end up in jail) are at lower risk of exposure than photos from crowded streets suggested? Is there a chance that the heat and humidity reduces the severity of the virus, so the increased spread doesn’t lead to overwhelmed hospitals? Could this be a spike related to Memorial Day weekend activity that doesn’t indicate a future trend?

We don’t know the answers to those questions yet. The current increase in new cases and hospitalizations are at the lower end of the projections we were looking at a month ago—but we could simply be running a couple of weeks behind the forecast models. Or perhaps there are things about the virus we don’t fully understand yet. If we’re lucky maybe Texas can avoid a large, sustained wave of disease like New York and northern Italy suffered through.

We’ll learn the answers in the coming weeks, as we see what the infections look like and how our hospital capacity holds up amid changing attitudes toward the virus. Without a comprehensive testing system or a wide-scale contact-tracing program coming from the state, all we can really do is hope for the best and prepare for the worst. Let’s follow the advice of public health experts and keep wearing those masks!