On Saturday, two days after President Donald Trump visited the Texas-Mexico border to warn of the dangers of immigration, San Antonio native son Julián Castro emphasized the value of America’s immigrant experience as he formally announced his bid for the Democratic nomination for president and to unseat Trump next year.

Castro made his announcement at Plaza Guadalupe, on San Antonio’s historic Hispanic Westside, in front of more than 2,500 supporters. The candidacy of this former San Antonio mayor and Obama administration cabinet member, and the heir to Hispanic hopes nationwide, was no great surprise for many who have followed his career.

“Six years ago, I had the honor of standing before the Democratic National Convention,” Castro said of his breakout moment on the national stage. “I said then that the American Dream is not a sprint or a marathon but a relay. My story wouldn’t be possible without the strong women who came before me and passed me the baton. Because of their hard work, I have the opportunity to stand here today. My family’s story wouldn’t be possible without a country that challenged itself to live up to the promise of America. That was the point of the American Dream: it wasn’t supposed to be just a dream. America was the place where dreams could become real. But right now, the relay isn’t working. Today we’re falling backward instead of moving forward. And the opportunities that made America America are reaching fewer and fewer people. Today, we’re at risk of dropping the baton. And that’s why we are here today. Because we’re going to make sure that the promise of America is there for everyone.”

In many respects, Castro is the perfect political contrast to Trump: he represents Hispanic immigrant success at a time when Trump maligns many immigrants—legal or otherwise—as criminals. At age 44, Castro represents youth against Trump’s 72 years. And after having spent two years publicly preparing (and who knows how many years of private preparations) for his announcement, Castro represents careful deliberation against Trump’s impulsivity.

Castro was introduced by his mother, Rosie, a beloved Chicana-era icon from San Antonio; and she was introduce by U.S. Representative Joaquin Castro, Julián’s identical twin brother. Julián was also flanked his wife, Erica, a schoolteacher; his daughter Carina, who famously flipped her hair when TV panned to her during her father’s 2012 keynote speech during the Democratic National Convention; and his son, Christian.

Castro enters what is expected to be a large, wide-open Democratic field next year as one of the first major candidates and as an underdog. A year ago, the Washington Post projected as many as forty viable candidates who could end up seeking the Democratic nomination.

Within minutes of Castro’s announcement, he made his first campaign promise. As mayor, one of his signature achievements was when he successfully convinced the business community to work with him to endorse a referendum that raised the local sales tax to fund full-day pre-kindergarten, which is called PreK4SA.

“Here in San Antonio, I made PreK4SA happen. As president, we’ll make Pre-K 4 the USA happen—universal pre-kindergarten for all children whose parents want it, so that all of our nation’s students can get a strong start.” 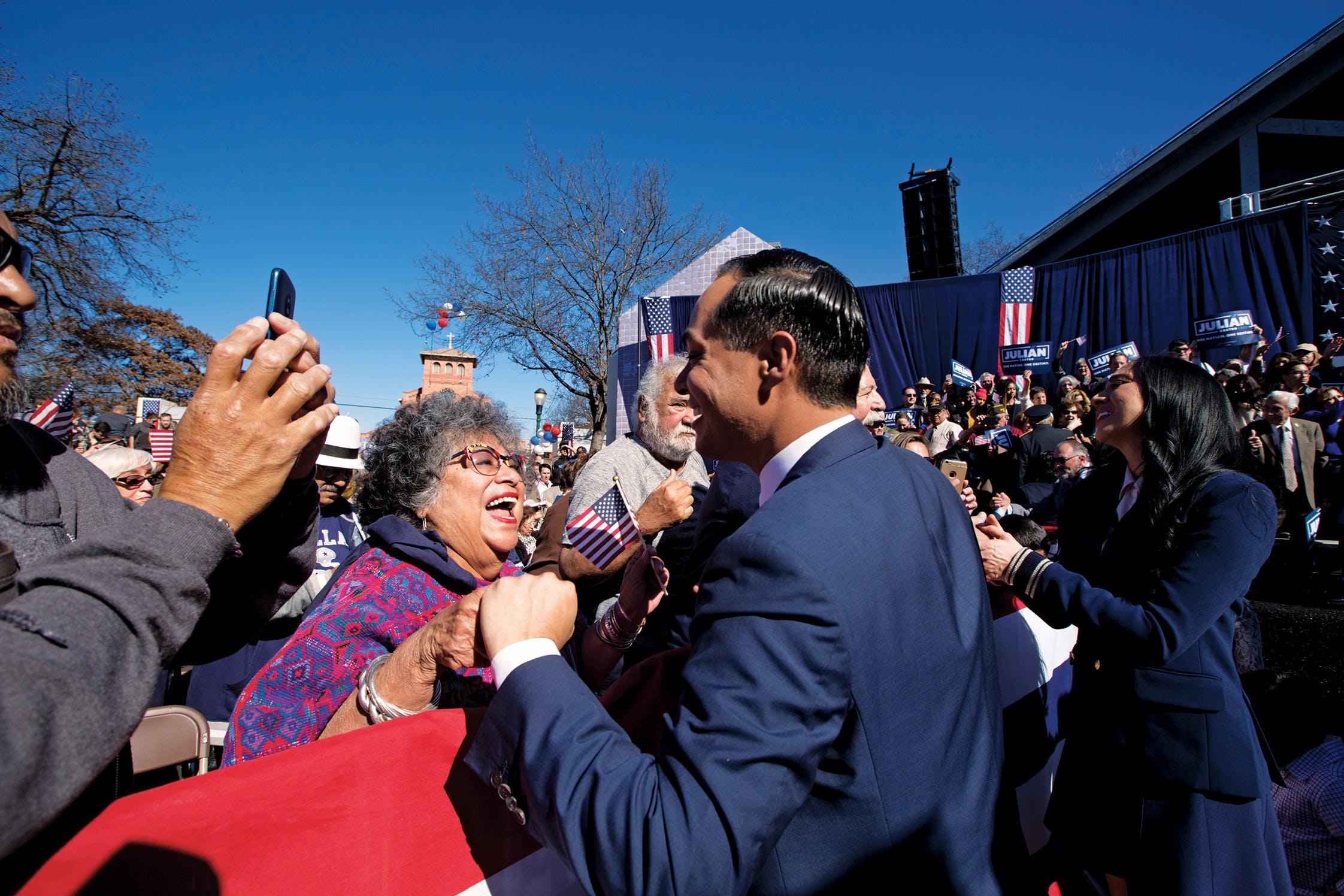 In a November National Podcast of Texas interview, Castro told Texas Monthly that he fully expects a crowded primary field and that no one else’s candidacy would influence his ultimate decision on whether to run. Castro told the Associated Press on Wednesday that a large Democratic field should benefit voters. “A lot of people are going to run in this Democratic primary, and that’s going to be good for both the party and the country,” he said. “It’s going to be good for Democrats to get a sense of people of different backgrounds and different perspectives. I think it’s going to be cathartic.” Castro also said in his Texas Monthly interview that no Democrat can “out-gutter” President Trump and win.

Perhaps the biggest question mark relates to the potential challenge by fellow Texan Beto O’Rourke, of El Paso. O’Rourke’s formidable run against U.S. Senator Ted Cruz last year highlighted Republican vulnerabilities in what has been a solidly Republican Texas since Castro was a Stanford University student at age 20. And O’Rourke’s campaign style ignited a groundswell of national Democratic support that resulted in record-breaking contributions to his campaign.

The political calculus made by Castro, despite pressure to run for a statewide office last year, was that the electorate would not vote for someone for president who had just notched a loss on his political record. But critics of Castro’s choice to stay out of the fray, particularly when O’Rourke jumped in with gusto, suggest that the former mayor is too cautious, a style that would not play well against a no-holds-barred Trump. “Tell him to grow some balls,” one Texas moneyman told a Castro campaign adviser this week, even as he agreed to contribute to the campaign.

With his announcement speech, Castro did wade into some of the country’s most profound wedge issues. “To be the fairest nation, we have to reform and reimagine our justice system. All over this nation, for far too many people of color, any interaction with the police can become fatal. If police in Charleston can arrest Dylann Roof after he murdered nine people worshipping at Bible study without hurting him, then don’t tell me that Michael Brown, and Tamir Rice, and Aiyana Jones, and Eric Garner, and Jason Pero, and Stephon Clark, and Sandra Bland shouldn’t still be alive today too.”

He also called for universal health care, raising the minimum wage, abortion rights, enhancing the rights of organized labor, and affordable housing. Then he promised to countermand one of Trump’s early actions in office.

“Don’t let anybody tell you that we have to choose between growing our economy and protecting our planet,” Castro said. “We can fight climate change and create great jobs—and we don’t have a moment to waste. Scientists tell us that, if we don’t get serious right now, the consequences will be tragic. So we won’t wait. As president, my first executive order will  recommit the United States to the Paris Climate Accord. We’re gonna say no to subsidizing big oil and say yes to passing a Green New Deal.

Castro walks a fine line as it relates to his Hispanic appeal. He and his younger sibling-by-a-minute Joaquin have long been held up as the crown princes of Hispanic politicians—having succeeded another San Antonian, former mayor Henry Cisneros. Like Cisneros, part of Julián Castro’s appeal is his ability to work with white business and political leaders. In a glowing 2010 profile of Castro, the New York Times Magazine declared him “The Post-Hispanic Hispanic Politician.” It was a comparison made of Barack Obama as the post-racial president.

And like Obama, who embraced his race but avoided making it a regular part of his campaign, Castro is expected to run a campaign that embraces his heritage—highlighting that he is but two generations removed from a grandmother who immigrated to the United States from Mexico—but does not make it a focal point of his campaign.

He reminded the boisterous crowd of Trump’s visit to McAllen on Thursday to underscore what the president called a crisis at the border. “Well, there is a crisis today—it’s a crisis of leadership.  Donald Trump has failed to uphold the values of our great nation.”

The National Podcast of Texas

Julián Castro: “You’re Not Going to Beat Donald Trump by Trying to Out-Gutter Him.”