When Babe Schwartz died on August 10, it brought back memories of the liberal lion of the Texas Senate. After his legislative years, he was the classical lobbyist—garrulous, informed, good-humored, wise, and effective.

One person who reflected on Babe’s death was one of the nation’s preeminent documentarians, Paul Stekler. He is a professor in the Department of Radio-Television-Film at the University of Texas at Austin.

Stekler remembers Babe as “the kind of character we don’t see so much these days. An unforgettable guy.” So unforgettable that Stekler featured Babe in a documentary.

“We filmed at the 1995 Lege session with a cast that included folks who’d passed away years ago, Bob Bullock and Sam Kinch and Lena Guerrero—and now Babe.” The documentary, Vote for Me: Politics in America, was co-produced by Stekler, Louis Alvarez, and Andy Kolker.

Stekler called our attention to this sequence about lobbyists.  You’ll see a cast of lawmakers, well-known lobbyists—most of them former legislators, and journalists—including, near the end of the segment, Texas Monthly’s beloved Paul Burka. You will see how these rascals with old flip-phones work the lobby, which is why they call them lobbyists. We share this excerpt on the morning that Babe’s family announced that funeral services will be held at the Texas State Cemetery on September 5, beginning at 10:30 a.m.

Enjoy an eight-minute break. And our thanks to Stekler. 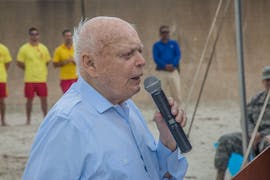 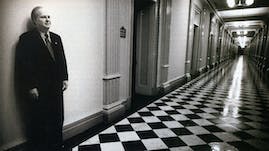