Even before the first question was asked in the Friday night governor’s debate at the LBJ Library in Austin, the outcome of the race between incumbent Republican Greg Abbott and Democrat Lupe Valdez was a foregone conclusion. To change that, Valdez needed to force a fatal mistake by Abbott. That didn’t happen.

Although a different Valdez showed up for the Friday debate than we’ve been seeing all year, she didn’t deliver the rhetorical knock-out punch that she needed. She started her campaign earlier this year as a bumbler who knew little about state government. In the debate, Valdez showed she has learned a lot and could put a human face on issues, while Abbott talked about them in a way that would make a bureaucrat proud. It was passion versus policy.

Their sharpest division occurred when they discussed the law known as the Texas Dream Act. The law allows undocumented youth to pay in-state tuition for college if they have graduated from a state high school. The bill was signed into law by former Governor Rick Perry.

Abbott said he would favor repealing the law because it contains a flaw—it requires a student to work on a path to citizenship. That is impossible, Abbott said, because federal law gives no undocumented immigrant in America a path to citizenship. “The legislators who passed that Dream Act, they had a noble cause behind what they were seeking to do, but there was a flaw in the structure of what they passed,” Abbott said. “The law that passed who said these students who received in-state tuition had to demonstrate that they were on a pathway to achieving legal status; however, there is no apparatus in the law to make sure that is, in fact, being done. Hence, the law as structured is flawed and has to be fixed.”

Abbot said the job of the state is to educate Texas students first, making it sound like Dreamers had spent most of their lives in a foreign country instead of being foreign-born children who were reared in Texas.

No political race in recent memory has displayed the disparity between the Democratic and Republican parties like this year’s governor’s contest. Almost obscene amounts of money just keep flowing into Abbott’s campaign account. Minutes before the debate began, Abbott’s campaign issued a news release saying he had raised $5.5 million just since July 1. He had started this year with more than $40 million—an amount that ran off potential A-List opponents in both the Republican primary and among the Democrats.

With the exception of Beto O’Rourke’s challenge to incumbent Republican U.S. Senator Ted Cruz, the Democratic candidates for statewide office are politically impoverished. And that’s why the party got a Dallas County sheriff who was little known statewide to step up and take on Abbott this year.

While Abbott demonstrated a command of state government borne of his reputation as being a micro-manager, Valdez did find areas of vulnerability. In addressing property taxes, Abbott vowed to provide relief. Valdez responded by saying that we could not talk about property taxes without speaking about education. She then blamed Abbott and other state leaders for pulling back on state funding of schools and forcing local jurisdictions to make up for it by raising property taxes.

Perhaps Valdez’s biggest zinger came in response to a question of whether she would have tapped the state’s massive rainy day fund to help the victims of Hurricane Harvey. “He calls a special session for bathrooms, but does not call a special session when people are dying,” Valdez said. “The rainy day account is the biggest savings account in the United States. Governor, it rained.”

The one issue on which the two candidates agreed was on the decriminalization of marijuana possession. Abbott said he would agree to legislation that lowers the penalty for two ounces or less of marijuana from a Class B misdemeanor to a Class C misdemeanor. At present, a conviction on that small amount of marijuana is punishable by up to 180 days in jail and a $2,000 fine. By going to a Class C—essentially a crime on par with a parking ticket—the maximum penalty would be a $500 fine and no jail time.

On two occasions, Abbott side-stepped questions to remove himself from responsibility. He was asked whether he supports removing a plaque that was put up in the Capitol in the 1950s praising the Confederacy and declaring that slavery was not the cause of the Civil War. House Speaker Joe Straus has demanded that the historically inaccurate plaque be removed. However, Abbott said the plaque was put up in accordance to a resolution passed by the Legislature so it is up to the Legislature to remove it. But he said he’d like to see it removed. That’s how you have your plaque and remove it, too.

Abbott also dodged a question on whether he would sign or veto a transgender bathroom bill if it reached his desk. The legislation would have limited government building bathroom access to the facility appropriate for the gender listed on a person’s birth certificate. Last year, Abbott added the discriminatory legislation to be considered in a special session despite widespread opposition from the business community because it would have spoiled Texas’s image and cost millions of dollars in lost tourism and corporate relocations. The bill failed in the House and never made it to Abbott’s desk. The legislation is a hot issue for religious conservatives, but Abbott could have made sure it did not come up again by unilaterally declaring he would veto it. Instead, he merely said it was not part of his agenda for the state. Valdez called the legislation “fear-mongering.”

Overall, Abbott demonstrated that he is a competent—if not an inspiring—chief executive officer for the state. Valdez showed up prepared and exhibited the possibility that she could have made the race competitive if she’d only had $20 million to partially erase Abbott’s tremendous financial advantage. At the end of June, he had $28.9 million in the bank to her $222,000. That’s a deficit no single debate could ever erase.

Here is the full debate: 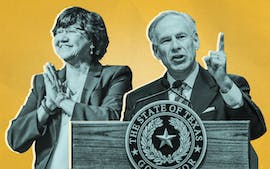 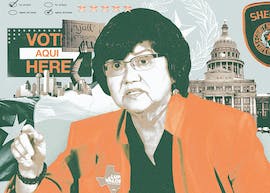 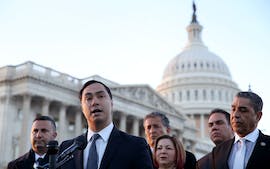 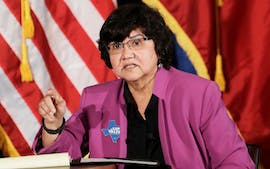