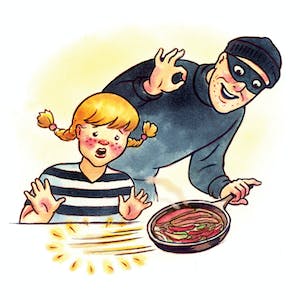 The Cameron County district attorney’s office arrested a man who had, over the course of nine years, stolen $1.2 million worth of fajitas from the local juvenile justice department.

A student at Glenda Dawson High School in Pearland was named homecoming queen and then kicked seven field goals at that evening’s football game.

A stolen dog named Ladybird was found in Portland, Oregon, and returned to her owners in Austin after being missing for three years.

A city councilman in Odessa refused to publicly reveal where he works.

A man at a strip club who was asked by a Travis County sheriff’s deputy about the white powder he was carrying replied, “It’s definitely cocaine, I just bought it,” and was promptly arrested.

An eighth grader in Denton was arrested after allegedly bringing marijuana cookies to school.

A hunter in Union Grove shot and killed a 417-pound wild hog that had been tearing up his property for five years.

Meanwhile, in Texas: Twenty Tons of Pineapples Spilled Onto a Freeway

Meanwhile, in Texas: Roads Melted in the Excessive Heat

Meanwhile, in Texas: A Great Dane in Bedford Set a World Record

What Is the “Unidentified Amarillo Object”? We Have Ideas.