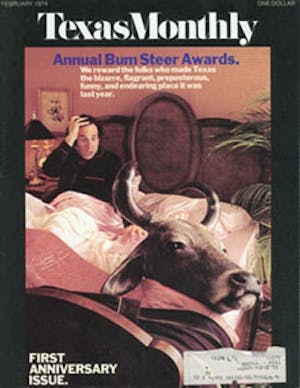 ONLY TWO GROUPS OF STOCKS declined during the stock market collapse precipitated by the energy crisis: those that had something to do with energy and those that did not.

Mickey Mouse and the Avon lady joined hands for a lovers’ leap over the edge of a cliff, and the resulting decline of Walt Disney and Avon Products stock produced what chartists derisively call “the falling anvil formation.” Disney fell from a 1973 high of 123 78 to a low in early December of 40 12. Avon did a swan dive from 140 to 60 12. It’s true that most people drive to Disneyland and Disneyworld, but investors assumed that the Avon lady walked.

Such gutted stocks were, unfortunately, the rule rather than the exception during the stock market’s energy crisis crisis. Some $97 billion in market value in stocks listed on the New York Stock Exchange disappeared during the month of November alone.

Horror stories abound. Hilton Hotels from 27 12 to 11 12. Goodyear Tire from 24 to 13. General Motors from 67 to 45. These stocks are “energy intensive,” which is Wall Street’s new pet phrase that will hopefully make us forget “synergism.” There probably will be fewer automobiles sold and consequently fewer tires sold and fewer hotel rooms occupied. But what about the large percentage declines in the telephone stocks? If people can’t travel as much as they’d like, chances are they will make a lot more long distance telephone calls. And the domestic oil companies, which had enjoyed a few salad days at the outset of the energy crisis, turned south with the herd in November.

It was as if the paddy wagon had been backed up to the door of the saloon and everyone rousted into it, the good girls with the bad. Most brokers can’t remember a decline as fierce as the 200 point collapse in the Dow-Jones spanning just 27 trading sessions last fall. Board room visitors expected at any minute to see the New York Stock Exchange ticker tape flash the dreaded message: “TAKE NO PRISONERS!”

But 1973 had been a crazy year even before the energy crisis panic last November. The market opened the year with great promise in a strong bull phase, and experts were predicting a high of 1200 on the Dow-Jones Industrial Average. That index did reach 1060 in January before the Watergate blues sent it nosediving to 850 or so in July. Somehow that phase got overdone, and the market turned up to reach 990 again by late October. Then the Arabs turned off the oil. Before brokers could say “margin call,” the market collapsed to 790.

That’s five years worth of action compressed into fewer than 12 months. And since institutions account for some 70 per cent of the volume on the New York Stock Exchange, some felt that the gyrations of 1973 could be laid directly at the feet of institutional money managers, whose hands could make those of the most limp-wristed dandy on Third Avenue look strong.

Of course, a decline in the stock market was due the minute the Arabs so pointedly proved who was at the other end of America’s silver cord. But although there’s little positive to be said for a situation in which the United States is being blackmailed by both the Arabs and the teamsters, the severity and magnitude of the decline may not be justified unless the energy crisis proves to be a singularly ill wind.

Take the Alaskan pipeline, for instance. The Arabs were able to get that project passed by congress within a month, something the oil industry in this country couldn’t do in five years. If all goes well and the caribou don’t stampede, Alaskan oil could be laid down in the lower 48 sometime in 1978. The daily quantity of oil from the north slope should be about two million barrels. If we can stabilize or reduce consumption in the next five years, the Alaskan oil will go along way toward making up for the current shortfall. And five years isn’t such a long time for money managers who previously were paying up for earnings of growth companies in perpetuity. How time flies when you’re having fun.

It’s a sore subject, but higher prices for petroleum and natural gas are coming, they’re going to hurt and they will help to curb consumption and to encourage exploration. Nothing cures shortages quicker than higher prices. Remember sulphur in the Sixties? There are undiscovered reserves off the East and West coasts of the U.S., and as the need for that oil becomes more critical and the price higher, environmentalists will learn to appreciate, as Texans learned long ago, the functional beauty of offshore drilling rigs.

The natural gas shortage, in particular, could probably be solved relatively quickly by prices at a competitive level. Artificially low prices for natural gas have prevailed too long as a dictate of government, encouraging spendthrift use of the least polluting fuel and discouraging exploration. Only in the last ten years have exploration companies actively looked for natural gas. More than one geologist was sacked in the Fifties because a well yielded gas rather than oil. If the incentive of a higher price for gas is made available some currently dormant wells will be uncapped and more will be discovered.

Some oil industry spokesmen, trying desperately to find a bright side, point out that the Arabs may have done us a real favor by springing their trap now. Had they waited another five years, our dependence on Middle Eastern crude would have had us over a barrel considerably larger than 55 gallons. The hangover we’re experiencing now from a fuel consumption binge would have been monumental, indeed.

But oil, Arabian or domestic, is not the solution to America’s energy problems. The U.S. must develop alternate sources of energy. Whether that alternate is nuclear, solar, oil shale, coal or an unknown, it can only become reality through the genius of American technology. If this country can succeed in developing a viable alternative source of energy, that will certainly serve the ball back into the Arabs’ court.

The Arabs, like any monopolist who withholds production, stand to gain higher prices in the short run. However, the supply of energy is both elastic and flexible, that is, the supply will increase if the price goes up, and as one source of energy becomes too expensive, different sources can be used. So as the price of crude is bid up and as Americans and other advanced nations bring to the market new energy-producing technologies, the demand for the Arab product in the long run could drop. If such a time does arrive, it will be interesting to see what Saudi Arabia can then do with its oil reserves. There are a number of angry voices who would be happy to make a few suggestions.

But if there is anything positive or hopeful about the energy crisis, the stock market could not find it in 1973. Gnashing of teeth and panic selling replaced sober consideration and objective reasoning in the halls of Wall Street’s institutions.

Is there anyplace to hide during the energy crisis panic? There is if investors can convince themselves that this, too, shall pass and that the stock market will survive. Common sense and patience are the best palliatives for energy anemia. Logic applied to an illogical situation rewards nothing in the short run, but long-term results could be very gratifying.

Consider the domestic oil companies that have U.S. reserves that are uncommitted or companies that are likely to discover new reserves in the U.S. Domestic crude oil in the ground was worth less than $4 a barrel a year ago. At this writing it can be sold for $8.45. A company that had uncommitted reserves a year ago finds its assets more than doubled today without the outlay of one extra cent.

What about bicycles? There’s a boom in two-wheelers. The manufacturers are a lackluster group since Schwinn is privately owned, but who makes replacement tires and tubes? The more we pedal, the more we wear out.

How about those alternative sources of energy? Who will benefit from the speed-up in building nuclear power plants? And if coal is going to be king again, who owns the coal? Who makes the equipment to get it out of the ground? How will it get from the coal fields to the utilities?

One source suggests hobby companies as good investments, reasoning that if people can’t go anywhere for entertainment, they might look for something to do at home. Another suggests a “Three S” portfolio for a cold winter during the energy crisis: Schlitz, Simmons and Syntex.

But until sanity returns to the stock market, until the Arabs relent, until government sees the situation as something other than another political opportunity, until the Chicken LittIes of Wall Street realize the sky is not falling, there may not be any refuge—no matter how logical—for investors. Until then it will continue to be a one-sided coin: heads you lose, tails you lose.