Sessions told the Senate Appropriations Subcommittee on Commerce, Justice, Science and Related Agencies that he had concerns about the Legal Orientation Program, or LOP, that initially led to the decision to “pause” the program while reviewing its effectiveness. “I recognize, however, that this committee has spoken on this matter and out of deference to the committee, I’ve ordered that there be no pause while the review is being conducted and I look forward to evaluating such findings as are produced and will be in communication with this committee when they are available,” he said.

“This is tremendous news for the immigrants we serve,” said Rebecca Lightsey, executive director of Austin-based American Gateways, which annually helps about 6,500 detainees at three Texas detention centers. “They will be able to get basic, critical information about the legal process and their legal rights through our incredible team of lawyers and case workers.”

The Justice Department on April 10 announced that it was halting funding for the Legal Orientation Program, effective April 30, while it studied the program’s effectiveness. The $8 million Justice Department program has been providing grants to nonprofit agencies working at 38 immigration detention centers, including ten in Texas.

The LOP announcement earlier this month caught service providers by surprise, threatening dozens of jobs tied to the funding and leaving little time to try to replace the money.

The program was created in 2003 by the George W. Bush administration. Only about a third of people facing deportation in immigration courts are represented by legal counsel. The Legal Orientation Program was meant to provide detained immigrants with some basic information about their rights and legal relief that may be available to them.

A 2012 Justice Department study found that detainees who received LOP services had their cases resolved twelve days faster than detainees who didn’t get the services. That resulted in shorter stays in detention facilities, saving the government about $18 million a year—well more than what the government spent on the Legal Orientation Program.

The program has been praised by immigration attorneys and judges, as well as Immigration and Customs Enforcement.

The omnibus spending bill signed by President Trump earlier this year included continued funding for LOP. The American Bar Association and other groups had urged the Justice Department to continue the program while it was under review.

The near-death experience served as something of a wakeup call to LOP providers.

“While this is wonderful news today, we worry that we will be facing the same situation in the future if the DOJ’s audit does not support the continuation of the program,” said Kate Vickery, executive director of the Houston Immigration Legal Services Collaborative. “As a community, we need to recognize the importance of supporting programs that provide due process and information for immigrants facing deportation. The basic information provided by the LOP program should not hinge on a single funding stream, and the fact that this program could end anytime should motivate us to create additional programs and systems, such as our new Deportation Defense Houston project.”

Lightsey of American Gateways also said providers need to search for other, additional sources of money.

“Access to basic legal information, if not full-on representation, while going through a court process with such high stakes should be guaranteed,” said Lightsey. “The basic human rights of tens of thousands shouldn’t hinge on a single funding stream.” 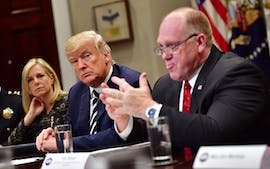