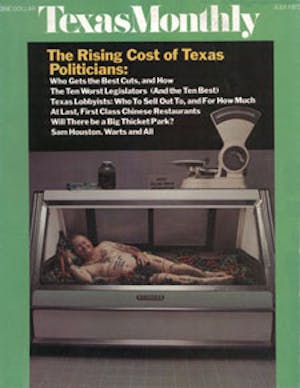 Eastex’s heavily political role in the Thicket controversy has, unavoidably, made them some enemies. Barefoot Sanders, the 1972 Democratic nominee for the U.S. Senate, and Alan Steelman, a Republican congressional candidate in Dallas, both took strong campaign stands on the side of a large park and both were denied permission to tour Eastex holdings in the Thicket. Another politician they have opposed in the past, though not so frantically, has been Charlie Wilson, who says “I don’t owe them [Eastex] anything; they’ve never done anything for me except hit me over the head when they felt like it.”

When Wilson entered the new Congress conservationists were hopefully optimistic that he would support their new, whittled-down, 100,OOO-acre compromise proposal. During the congressional interim, Eckhardt had sat down with the Big Thicket Association and other members of the Texas delegation, to arrive at what he felt was a bill most everyone could support. The stream-bed corridors were narrowed and some of them removed, the standing units pared in size. To the conservationists, it represented their ultimate compromise, an effort to pass a bill before the Thicket disappeared altogether.

Eckhardt took the bill around to Bentsen, to Wright Patman, the dean of the Texas delegation, to other Texas congressmen. “I wasn’t going to compromise beyond the 100,000 acres,” he remembers, “but nobody ever said that was in question. I didn’t get the impression that there was anybody at all opposed to it.”‘

Eckhardt went to see Wilson: “I showed him our compromise bill and we talked it over and he never said a word about being opposed to 100,000 acres. I told him that, since it was in his district, he could take the initiative and I’d just sign his bill [as a cosponsor] if he had one.”

Wilson’s own recollection of the meeting is fuzzier but essentially the same: “I told him to just go on ahead with his own bill.”

Wilson admits that, at the time of the conversation, he had an advance inkling of an event of some import to East Texans: in February, Temple Industries and Eastex, Inc., announced their intent to merge. Between them, the newly enlarged Time, Inc., subsidiary would hold over a million acres of Texas land. Rumors abounded as to the terms of the proposed merger (eg., the Temple family was to become the largest single stockholder in Time, Inc.) but one solidly factual nub stared balefully at horrified conservationists: Mike Buck1ey would be the operational head of the combined operation.

The announcement, or advance word of it, may also have had repercussions in Washington. A man who is both a constituent and a close friend of Charlie Wilson’s contends that up until that time Wilson was committed to a 100,000 acre park, but “the day they announced that merger, that park lost 30,000 acres.” Reports came sifting out of Washington that Wilson was going to introduce a bill of his own, a park of 75,000 acres with only a Neches River corridor. They were accurate reports.

Although less than joyful (“it’s unfortunate”) , Bob Eckhardt admitted that “they kind of have Wilson in the middle somewhat.” Wilson was getting what he called “one helluva lot” of pressure. Mike Buckley sent him a telegram which termed the park proposals “shockingly discriminatory against Eastex,” and predicted “the future of this corporation would be severely damaged with the passage of your bill as I understand it, and as a representative of all the people in this district I do not understand how you can justify discriminating against one company to the proposed degree.”

Ollie Crawford followed that up with a letter even less marked for subtlety: “Certainly Mike Buckley’s position is easy to understand as president of one of the largest corporations in your district which employs more than 1900 people. ..I would suggest you set up an appointment with him on your next trip to Texas to discuss the Big Thicket.” It was not the kind of correspondence that freshman congressmen are pleased to receive.

There were other pressures as well. Wilson had, like all marginally liberal Texas politicians, sought and received the support of organized labor in his campaigns. When both the Sabine Area Building and Trades Council and the Beaumont Teamsters, two of the largest union locals in his district, denounced the park, Wilson started feeling a little boxed in.

There was little offsetting pressure from park proponents. Said Eckhardt, “There are a lot of selfish interests who are against the park and bringing a lot of pressure to bear. But there aren’t any powerful lobby groups on the other side to counter that.”

Another curious reversal was in progress. In mid-1972, Bob Eckhardt, then five long years into his labors in behalf of a park, had seen his first hopeful glimmer of a powerful ally. The National Park Service, which in typically bureaucratic fashion had been studying the proposals for seven years, showed him the working plans that would precede their own recommendations.

“I was very pleasantly surprised,” he recalls. “It was almost identical with our own [100,000 acre] compromise proposal. They had everything in there we did, the corridors, all of Village Creek, everything. And it was laid out in exquisite detail, with maps and color overlays, aerial photographs.”

In February and March of this year, Eckhardt met with Nathaniel “Nat” Reed, the Nixon-appointed Assistant Interior Secretary and the Administration figure most directly responsible for developing the Park Service recommendations. “He was very encouraging,” says Eckhardt. “He told me he was very concerned about preserving the watercourses. He was very adamant, very strong, about it. We were undecided about including Turkey Creek in our bill, and it was at his urging we did so.”

By April, however, it was apparent that the Park Service recommendations, still not made public, had plummeted to less than 70,000 acres and all of the stream-bed corridors had been removed. Charlie Wilson was saying he has to “fight tooth and nail” just to get them to include a Neches River corridor. They have yet to notify Eckhardt of a change in plans, and no one at the Park Service or Interior Department is willing to speak for the record on what caused the switch. As Eckhardt says, “there’s a helluva lot of double-talk going on here.”

It is dificult to say what caused the Nixon Administration to back off so far from all those strong words by Wally Hickel, Rogers Morton and George Bush in 1970. Eckhardt blames Senator John Tower who, he says, “has become the major spokesman for the timber interests.” A Nixon-appointed official in the Interior Department, who admits to the backpedaling, blames it on “a tight budget,” but Eckhardt says the difference between the two park proposals is “infinitesimal compared to the total national budget.”

The House Interior Committee is expected to begin hearings this month on the various Big Thicket park bills. Eckhardt is modestly confident that, despite the opposition of Wilson, the timber lobby, and the Park Service, the Committee will report out a bill more-or-less in agreement with his own. Wilson concedes the possibility but warns “they’d better be prepared for one hellatious Armageddon of a battle when we get down to the mat on the floor of the Congress; I’m not gonna stand for that kinda abuse without taking every One of ’em to the Wall.” In East Texas, that’s fightin’ talk.

Charlie Wilson remembers talking to a timber company official who “told me he didn’t really care about what finally happened as long as ‘that damned Eckhardt don’t win.”

It’s pretty much come to that. In the ten bitter years that the Thicket battle has been joined, the parameters of disagreement have steadily narrowed while individual perspectives have diverged. It is difficult to support or oppose a cause for a decade without one’s own ego being confused with the rightness or wrongness of it. Again quoting Wilson, “It’s gotten down to everyone just bein’ ate up with who’s gonna win.”

The ivory-bill, in the meantime, is driven nearer to extinction in an effort to find solitude. Every day, fifty acres of climax forest are lost to the rattle of chain saws and the advancing sterile columns of the pine plantations. And Bob Eckhardt’s sad prophecy on the need of stream-bed corridors is being proven correct. Down near Saratoga, suburbia’s advance guard has driven into the very heart of the Thicket wilderness. The unmarked tractors of a land developer are penetrating to the virgin cypress banks of Village Creek, and the wild tangles of laurel and magnolia are being flattened for the front yards of “vacation home sites.”