Earlier this week, we discovered that the word “Texas,” in Norwegian, means, roughly, “a chaotic or crazy situation.” Today, we learned that as part of its new auction of rare two-character license plate numbers, the Texas Department of Motor Vehicles had—among expected stalwarts like “OK,” “EZ,” “XL,” “QT,” or “SA”—opted to include the option “AF.”

If you’re scratching your head right now as to why anybody whose name isn’t Andrew Francavilla or Alexis Franklin or something would want a license plate that reads “AF,” congratulations: you don’t use social media to interact with young people much, so you are unfamiliar with the slang abbreviation for a sentence like, “I’m hungry as f— right now,” which is used to slip under Twitter’s 140 character limit. Rest assured, it’s in pretty common usage.

And, in what we’re going to assume is a deliberate nod to the slang term, the new auction from the DMV, in partnership with MyPlates.com, offers a depiction of what a Texas “AF” license plate might look like: 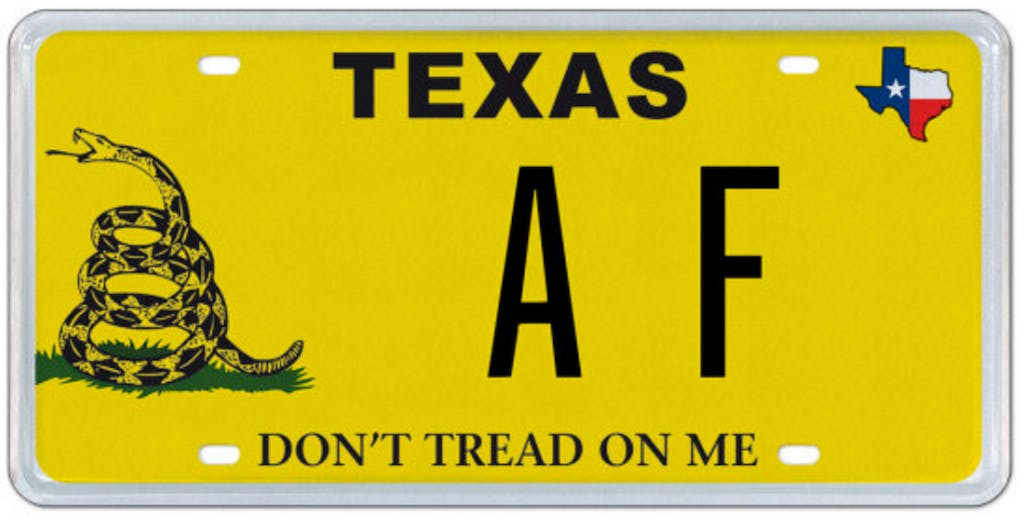 Given that the choice for the license plate is a “Don’t Tread on Me” flag that unmistakably reads “Texas AF” at first, second, and third glance, we’re going to assume that whoever is behind this auction is familiar with the slang usage of the term, and considers invoking the Gadsden Flag to be, er, Texas as f—. And it may well be! But the fact that you can actually buy a Texas AF license plate from the DMV is what we’d describe as texas AF—in the Norwegian sense of the word, naturally.