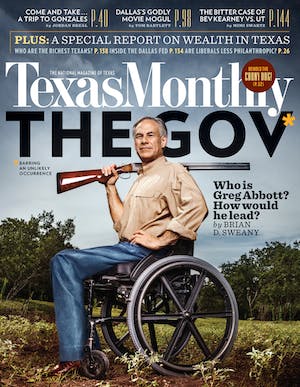 Assuming that Wendy Davis decides to test her mettle against Greg Abbott, as seems likely at this writing, one thing is certain: absent a black swan event, she will not become the next governor of Texas. The electoral deck is too heavily stacked against her, and Abbott is too talented and disciplined to commit the sort of dramatic serial unforced errors required for a Democratic victory. But how Davis loses will have profound repercussions for the state.

Three years ago, many Democrats were optimistic about Bill White’s prospects against Rick Perry, who had endured a difficult primary thanks to the efforts of Senator Kay Bailey Hutchison and tea party activist Debra Medina. White, a well-regarded three-term mayor of the state’s largest city, had a substantial war chest, in excess of $26 million, and ran a competent campaign. Yet Perry handily defeated him, 55 percent to 42 percent. Such has been the lot of statewide Democratic candidates for the past dozen years.

Today’s Democrats, energized by Davis’s attention-getting filibuster in the state Senate, are once again feeling optimistic—not that she can win (only the true believers actually think that) but that she might bring the state party back to life and set the stage for future victories. (Including national victories; if Texas turns blue, then the Democrats will all but have a lock on the White House, since it’s difficult to imagine a Republican winning the electoral college without carrying the Lone Star State.) “Wendy Davis 2014” might be the slogan on their placards, but their sights are set on 2018 and beyond.

Davis’s quick rise is understandable: she’s a charismatic figure with a compelling biography. But she’s not without her weak spots. She has a distinctly liberal record, highlighted by her signature opposition to Senate Bill 5, which, among other things, would have banned most abortions at or after the twentieth week. According to a University of Texas/Texas Tribune poll, such a ban is supported by 70 percent of Texas voters with an opinion on the matter, including two thirds of both Hispanics and Anglo women. One can expect Abbott to make a lot of hay about this.

Still, Davis has many fans inside and outside the state and will probably raise about $35 million, enough to run a very credible campaign. What that means in a state as conservative as Texas, though, is unclear. One possibility is that she will turn out to be the second coming of Bill White and garner less than 45 percent of the vote. If that happens, Democratic efforts to turn the state blue will suffer a devastating setback. A bad Davis loss would signal to national Democratic elites that dollars invested in Texas are unlikely to bear fruit anytime soon. Local liberal donors would return their gaze to races outside Texas, candidate recruitment would flag, and none of the pragmatic donors who have supported the GOP would begin hedging their bets by giving to Democrats as well. And Wendy Davis, the great Democratic hope of 2014, would end up doing the Republican party a big favor.

But there would be a downside for Republicans as well. A crushing Davis loss would help the party in the short term, but it would delay the course correction Republicans need to make if they want to maintain their majority status in the medium and long term. Without such a correction, the party could go the way of the once powerful California GOP.

Republican dominance in Texas has been fueled by the conservative nature of the state’s voters, bountiful campaign resources, high-quality candidates, straight-ticket voting, and a demoralized, disorganized, and at times dysfunctional opponent. With the general election nothing but an afterthought for most Republican officeholders, many GOP politicians structure their public discourse and policy agenda to cater to Republican primary voters.

But this very dominance may have sown the seeds of the party’s own demise. GOP politicians are so focused on appealing to their base that they’ve often neglected to notice how these appeals are perceived by the state’s changing electorate. Every day Texas becomes more Hispanic and less Anglo, and younger Anglos—many of them new arrivals from other, more liberal states—are less reliably Republican than their elders. If Republicans maintain their excessively rightward tilt, Texas will stay red for a while longer, but the odds of it jumping over purple and going directly to blue a decade from now will increase.

Take the comprehensive immigration reform that Democrats—and some Republicans—are pushing on the national level. This reform has been strongly opposed by Texas’s U.S. senators, Republicans Ted Cruz and John Cornyn, and by a substantial majority of the state’s GOP congressional delegation, effectively reinforcing the Democrats’ message that the Republican party is anti-Hispanic. Cruz and Cornyn’s position is squarely in line with that of Texas Republican primary voters with an opinion, 67 percent of whom oppose such reform. But it is squarely at odds with the views of the state’s Hispanic voters, 72 percent of whom support reform, as well as a slim majority of Texas voters in general.

Abortion is another issue on which the Republicans have not played their hand as wisely as they might. While an overwhelming majority of Texans agree with the ban on late-term abortions, other aspects of House Bill 2 (the resurrection of SB 5, which Governor Perry signed into law in July) are much less popular. The law creates considerable hurdles for abortion providers, mandating that abortion clinics meet the same standards as ambulatory surgical centers and requiring doctors who perform abortions to have admitting privileges at a nearby hospital. If upheld by the courts, it will significantly restrict access to abortion, an outcome supported by only 45 percent of Texans—as opposed to two thirds of Republican primary voters. Of those with an opinion, slightly less than half of Anglo women—a critical demographic for the state GOP—favor more-restrictive abortion laws, and that number is even lower among Hispanics (40 percent). In short, Davis won’t be the only candidate who is vulnerable on the issue of abortion.

Oddly, the best scenario for both the Republicans and the Democrats is one in which Davis gives Abbott a run for his money. If she gets her numbers up to 46 or 47 percent or, with the help of the Libertarian candidate, keeps Abbott below the symbolically important 50 percent mark, she will energize the Democratic base and set the stage for a competitive 2018 race, whether the candidate is Davis herself or San Antonio mayor Julián Castro or someone else entirely. But a strong showing by Davis would also be a wake-up call for the Texas GOP, forcing Republicans to recognize before it’s too late that general elections will no longer be mere sideshows and that they will have to appeal to a broader constituency than they do now. Single-party dominance, it turns out, isn’t good for the long-term health of the dominant party, or for democracy.

Though it’s the enthusiasm of liberals that turned Davis into a star, her candidacy might provide Texas Republicans with the come-to-Jesus moment they sorely need if they want to avoid a return to their former role as the state’s minority party. If she does well in 2014, Davis just might save the GOP from itself, succeeding where so many establishment Republican luminaries have failed in recent years.

Mark P. Jones is the James A. Baker III Institute for Public Policy’s Political Science Fellow, the Joseph D. Jamail Chair in Latin American Studies, and the chair of the Department of Political Science at Rice University.