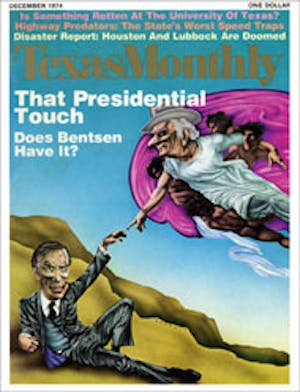 Chances are good that a year ago you had never heard of Philip Buchen; today he is one of the most powerful men in the world, the closest advisor to the President of the United States. Every president brings along such men—people he respects and trusts—to relieve the agony of the loneliest of jobs. If he makes it to the White House, Lloyd Bentsen will be no exception. We can learn a lot about our presidents from the men they bring with them—there was a time, after all, when Richard Nixon listened to Bob Finch and Herb Klein rather than Bob Haldeman and John Ehrlichman. The men around Bentsen are men much like himself—politically sophisticated, success­ful businessmen who cut their political teeth in the Connally-Johnson wing of the Texas Democratic Party.

(2) Ted Strauss, 49, Dallas. An attorney whose talents as a fund-raiser for the Connally-Johnson wing of the Democratic Party are second only to those of this brother—national Democratic chairman Bob Strauss.

(4) Ben Love, 49, Houston. Chairman of the Board, Texas Commerce Bank—the bank which has held Bentsen’s assets in a blind trust since 1971. Love organized the Houston fund-raising dinner in November, 1973, which produced $375,000 to stake Bentsen’s presidential aspirations.

(5) Bill Lane, 50, Houston. A family friend since he met the Bentsens at a Houston party in 1960. On the Lincoln Consolidated Insurance Company board, and, with Love, one of the trustees of Bent­sen’s assets. President of Riviana Foods.

(7) Joe Kilgore, 55, Austin. He and Bentsen go back a long way: schoolmates at age ten, Boy Scouts together, attended UT law school at same time. Both ran suc­cessfully for Hidalgo County offices in 1946, and both represented the Rio Grande Valley in Congress, Kilgore taking over when Bentsen quit to enter business in 1955.

(8) Don Bentsen, 50, McAllen. Closer to Lloyd politically than the other Bentsen brother, Ken, who is a prominent Houston architect. Don is president of Tide Prod­ucts, a firm which manufactures and dis­penses insecticides and agricultural fertili­zer.