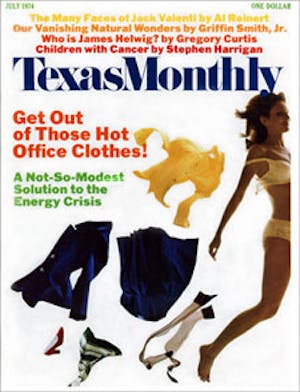 The Texas Republican Party, at a critical time in its unsteady life, apparently has very quietly and very unofficially adopted an “enclave strategy” for 1974.

Watergate has very little to do with it, although Spiro Agnew’s fall and the nonstop woes of Richard Nixon certain­ly haven’t helped morale. The reason is that the state GOP, after more than a decade of enthusiastic search-and-destroy operations against one-party rule by the Texas Democracy, has simply lost its élan.

Texas Republicans will be grateful just to hold onto their current strength in the state legislature (eighteen seats in the House, three in the Senate) and to save U.S. Representative Alan Steelman of Dallas from the perils of some unkind redistricting. Other than that, the party will be on the sidelines this year. There will be no spirited effort to put over the GOP’s full slate of statewide candidates, including gubernatorial nominee Jim Granberry.

Proof of the party’s eagerness to give Dr. Doug Harlan the money he needs to win the one congressional district it has a chance of taking—the 32-county West Texas seat that Democratic Representa­tive O. C. Fisher is vacating—remains to be seen.

And in Houston last February there was the distinctly unRepublican scene in which the only candidate to file for Con­gress in the 18th District (a 25-year-old white businessman who introduced him­self as “that guy who’s crazy enough to run against Barbara Jordan”) was ar­rested on a disorderly conduct charge at county GOP headquarters.

The forebodings began in late 1973 when the party’s two brightest possibili­ties for the governorship, national party chairman George Bush and State Repre­sentative Ray Hutchison of Dallas, de­cided to hold onto their present jobs. One month after the filing deadline this year, the 1972 party standard-bearer, ex-State Senator Henry Grover of Houston, withdrew from the governor’s race. His action followed by two weeks Harris County Republican chairman Nancy Palm’s announced intention to quit sometime this year after having forged perhaps the best-organized county party apparatus in the state.

The timidity of Bush and Hutchison and the departures of Grover and Palm are more symptoms than causes of the current malaise of the Texas Republican Party. This disarray is a strange state of affairs indeed for the party which a little over a decade ago was confident of starting a complete revolution in Texas politics.

According to the GOP affirmation of faith at that time (spoken almost with one tongue by Republicans sky-high from mainlining pure Goldwater into every party capillary), right about now we all would be deep into the Thousand Year Reich of the Texas Republican Party. The credo held that conservative Democrats would desert their ancestral political home as its national leadership became more liberal, lured by a Republi­can Party which, in the style of Hyman Kaplan, lovingly spelled the word “con­servative” in big capitals with stars be­tween all the letters.

The theory was plausible, but it had a key flaw: the Democrats didn’t co­operate. They stayed put, kept in the tent by the musclepower of the LBJ-John Connally machine.

Success came to the Republicans not from mass defections by the Democrats but from the political bonanza of congressional and legislative redistricting in the mid-Sixties, and through single-­member state representative districts in the major urban counties in 1971.

Republican regions, grudgingly granted by Democratic mapmakers who had no feasible alternatives, in­creased GOP strength in Congress and the legislature. Suddenly the old crusade to achieve a bridgehead was unneces­sary; the well-scrubbed and energetic suburbanites who staffed the Republican drives of past years were almost handed their own turf, something made possible, ironically enough, by all those meddle­some federal courts.

But once more the party faces un­cooperative Democrats. The Democratic-controlled legislature is most unlikely to give the GOP an opportunity to grow much beyond its already neatly-fenced areas (though more court-ordered re­districting in the smaller urban counties next year will be to the Republicans’ gain). Only a concerted and organized effort could shake loose a few more congressional districts. After that, the party would be up against the old bar­riers of brasscollar voting tradition and the minorities’ distrust of the party of Nixon.

Concerted and organized efforts have never exactly been the hallmark of the Texas Republican Party anyway. To be­gin with, it’s not a state party at all, at least not in the sense that New York or even Florida have state Republican par­ties. The primary factor in shaping its character, the great distances which separate the various Republican stalking grounds around the state (Dallas, Hous­ton, the northern San Antonio suburbs, the Panhandle, the old German hill country counties, and the Midland-Odessa area), caused the Texas GOP to grow up as individual fiefdoms. When there was some semblance of central control, it was really control by what Grover always called “the Dallas crowd,” backed by U.S. Senator John Tower and distrusted and bitterly op­posed by Nancy Palm and her supporters in Houston.

The so-called Dallas-Houston split of the Texas Republican Party is alternate­ly explained as one of ideology (Hous­ton more conservative, Dallas more moderate), of political tactics (Houston more doctrinaire, Dallas more pragmat­ic), of tone (Houston more strident, Dallas more sophisticated), and of orientation (Houston more interested in state contests, Dallas more in national). But the antagonism reduces itself to the oldest political motivation of all: Us vs. Them.

This in-house enmity, a feature of the national GOP since the James G. Blaine era, has prevented the shaping of any joint strategy for the slow but necessary business of building a strong, truly state­wide party. The current state chairman, Tyler oilman Jack Warren, has won praise for salving a lot of intraparty wounds and for his neutrality ’twixt the two major factions. But neutrality is a long way from leadership.

Another cause of the Texas GOP’s troubles is its historic fascination with the national rather than the state politi­cal scene. Before Tower’s election to the Senate in 1961, the state party existed chiefly in anticipation of patronage from Washington. Barely had Tower’s votes been counted before he found per­sonal satisfaction and no small amount of power in being a national spokesman for the conservative cause and a kingpin at party conventions.

George Bush, son of a senator, was a Washingtonian by nature and ambition. Once he was elected to Congress from Houston in 1966, he never “returned” to Texas in a spiritual sense. He de­liberately put daylight between his per­sonal organization and the Harris Coun­ty GOP, which he had once headed but which had come under Palm’s more conservative control. Twice, in 1968 and 1974, he had the opportunity to run for the governorship—the historic first step the party needs to begin building strength in depth—but turned it down chiefly from desire to operate out of Washington and New York rather than Austin.

The other prominent Texas Republi­cans, such as presidential counselor Anne Armstrong, are better known along the Potomac than along the Brazos. Very understandably, party poli­tics back home for them are to be stringently avoided as long as their own positions are secure.

To the extent the Texas Republican Party has been successful since Tower’s initial victory, it has lost its hold on one of its best issues: the plea for a two-party state. Although Democrats still far outnumber Republicans on every level of government, the GOP is now at least represented on most of those levels and regularly competes for office. The per­centages received by Republican guber­natorial and senatorial candidates in re­cent years—almost all in the healthy forties (and in Tower’s case, the healthy fifties)—match those which party candi­dates in states like Michigan and Cali­fornia achieve. Indeed, the state GOP in 1970 found to its dismay that the two-party issue works both ways: many Texas voters reasoned that with John Tower already in the U.S. Senate, send­ing George Bush to join him would make things too lopsided.

(Then again there is the remark attrib­uted to Sissy Farenthold that “the greatest argument against having a two-party state here is the Texas Republican Party.”)

The other unquenchable Republican appeal—that it is the only true party for conservatives in Texas—has never won enough converts. When no less a con­servative Democrat than John Connally switched parties, he sparked no stam­pede. In the more than a year since his announcement, the only semi-quasi-notable conservative Democrats to fol­low him were ex-House Speaker Ray­ford Price and State Representative Skip Scoggins of El Paso.

If anything, those nominal Republi­cans who joined the GOP in the early Sixties to see Barry Goldwater nominat­ed for President might flock back to the Democrats to see George Wallace nomi­nated in 1976. Already the Wallace forces in Texas (who call themselves “Grassroots Democrats”) are skillfully organizing for just such a situation.

Nor are the Republicans threatened merely with losses on the right. The greater danger to the future of the Texas GOP may lie in the post-1978 era when a centrist Democrat such as Lieutenant (governor Bill Hobby, Attorney Gen­eral John Hill, or state Land Commissioner Bob Armstrong comes to power as governor. Such men have the po­tential, and are working toward not only holding together the right and left wings of the Democratic Party, but also appealing to new Texas residents from Northern and Western states, those who once were drawn to the GOP here because it offered in persons like Bush an attractive alternative to the unimagi­native, good-ole-boy Texas Democratic Party.

To confront these possible calamities, there are a few things Texas Republicans might consider doing, beginning as early as 1975:

Apart from its role as a pivotal bloc to be wooed by Democratic powers within the legislature, the minority could use specially-raised funds to hire a top-flight staff to do research and to draft what in Gerald Ford’s tenure as House Republi­can leader in the Johnson years were called “constructive alternatives” to pro­posals advanced by a Democratic gov­ernor and legislators.

Palm and many of her Houston supporters will be working for Governor Ronald Reagan or whoever is the un­questioned conservative in the race (though Gerald Ford will be an acceptable alternative). Former Governor John Connally, who has little visible following among the rank and file, may make an attempt to capture Texas delegates on his own, especially if the state gets a presidential primary law in the next ses­sion of the legislature. Both these drives will run counter to Senator Tower’s be­ing Texas’ favorite son at the 1976 Re­publican Convention and to the weaving of party plots he loves so well. The winners of the battle for the Texas delegation, if they are decisive and magnanimous enough, may provide the leader­s’ ship the state party needs after 1976.

By then, Texas Republicans should be looking hungrily toward 1978 when Tower’s senate term expires and when all statewide offices come up for elec­tion­—including a governorship Dolph Briscoe may choose to vacate. Perhaps by that time the prize of office if noth­ing else will attract a new group of strong contenders from the legislature, the congressional delegation, the cor­porate boardrooms and great law firms of the big cities, and from among those Texans who held important posts in the Nixon administration.

All this, however, rests on the as­sumption that Texas Republicans lust more for victory than for slicing each other’s throats. The next four years offer a test of whether the Texas GOP will spend its time in purposeful, effective planning and building or merely in sharpening the knives.