For the third time in three presidencies, National Guard troops will be sent to the border, Secretary of Homeland Security Kirstjen Nielsen told reporters Wednesday at the White House. President Donald Trump signed a proclamation Wednesday evening to send troops to the U.S.-Mexico border in an apparent effort to stop undocumented immigrants from crossing into the United States.

“The president has directed that the Department of Defense and the Department of Homeland Security work together with our governors to deploy our National Guard to our southwest border to assist the border patrol,” Nielsen said, according to Politico, adding that the federal government is still working with state officials to finalize a deployment plan. She said troops could be deployed to the border as early as Wednesday night.

“My top priority as Governor is ensuring the safety and security of Texans, and securing our southern border has always been essential to that mission,” Governor Greg Abbott said in a statement on Wednesday, responding to the news from Washington. “In my time as Governor, Texas has maintained a continuous presence of National Guard members along the border, and we’ve added hundreds of permanent Department of Public Safety troopers to the region. Today’s action by the Trump Administration reinforces Texas’ longstanding commitment to secure our southern border and upholds the Rule of Law, and I welcome the support. Going forward, Texas will continue to implement robust border security efforts, and this partnership will help ensure we are doing everything we can to stem the flow of illegal immigration.”

“I’ve spent a 42-year career in law enforcement investigating drug traffickers and protecting Americans at home and abroad. I can tell you a ‘boys and their toys’ approach to border security doesn’t work. What we need to do is fix a broken immigration system and get smart about border security.

“In 2014, when Central American refugees, women and children, fled violence and extreme poverty in Central America, Texas Republicans responded by calling out the National Guard, but Texans, their businesses, and local non-profits met them with open arms. This is who we are.

“We all know Governor Abbott will praise Trump as he bashes an entire region of Texas and places our state’s economy at risk. Now more than ever, we need a governor who will demand real solutions for our broken immigration system, rather than standby as our border communities are harmed by rhetoric disconnected from reality.”

The last time National Guard troops were sent to the border was in 2014, when former Texas governor Rick Perry spent millions of dollars to activate up to 1,000 troops at a time when Central American immigrants were illegally crossing the border in overwhelmingly large numbers. Perry had framed the move as a rebuttal to a federal government that he perceived as being too soft on undocumented immigration, characterizing then-President Barack Obama’s border security efforts as “lip service and empty promises.” Obama had rolled out a nearly identical National Guard deployment four years earlier, sending 1,200 troops to the border at a cost of $500 million, before scaling the deployment back in the beginning of 2012. In 2006, former President George W. Bush sent 6,000 troops to the southern border as part of Operation Jump Start, which lasted two years and ended up costing $1.2 billion. A spokesman for the Texas Military Department told the Austin American-Statesman on Wednesday that there are about 100 Texas national guardsmen currently deployed at the border.

Shortly after Perry deployed National Guard troops to the border, reports surfaced suggesting that there wasn’t much for them to do. In September 2014, the Washington Post reported that troops “saw little activity after taking their positions in portable towers and Border Patrol vehicles along the dirt roads and levees that overlooked the dense brush near the Rio Grande,” and “found themselves fighting boredom.” Some listened to music to kill time while staring at the brush along the riverbank.

The Posse Comitatus Act of 1878 limits U.S. military entities to non-enforcement roles within the U.S. when they are deployed by the president. Trump administration officials told NBC News that the troops won’t have physical contact with any immigrants and they won’t be tasked with processing them at the border. Similar to past deployments, troops will assist Border Patrol agents by providing air surveillance and by monitoring cameras along the border.

Trump had hinted earlier this week that he was planning to send some type of U.S. military personnel to the border.  “We have very bad laws for our border, and we are going to be doing some things—I’ve been speaking with General [Jim] Mattis—we’re going to be doing things militarily,” Trump told reporters at a news conference on Tuesday morning during a meeting with Baltic presidents, according to the New York Times. Mattis is the secretary of defense. “Until we can have a wall and proper security, we’re going to be guarding our border with the military. That’s a big step. We really haven’t done that before, or certainly not very much before.” 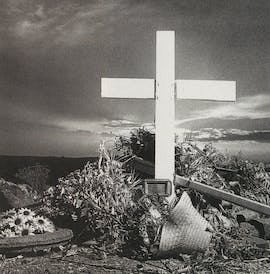