In May, I caught up with Richard Fisher, a former president and CEO of the Federal Reserve Bank of Dallas, to talk about the state’s long economic recovery ahead.

Texas Monthly: I’ve heard you say that you expect this to be a U-shaped curve for the recovery. How gradual a recovery should we expect?

Richard Fisher: It’s a very difficult thing, once you shut down an economy, to pick it up again. Texas is driven, as all the U.S. economy is, by small and medium-sized businesses. They’re the backbone of America. Companies with fewer than five hundred employees produce 40 percent of the nation’s output. They create 82 percent of the country’s jobs. They’re the ones that have been shut down, most notably. It’s not the companies that trade in the stock exchange. These are women and men who build things from scratch. Let me bring it down to Dallas, as an example. We have about a million people who go to work here every day. Three hundred thousand of them, roughly a third, work for companies that have fewer than 25 employees. That’s an astonishing statistic. And they have been furloughed, wiped off. These are restaurants and bars and little construction companies and little service companies and gardening companies and so on. Those people have been set back. They don’t have working capital to run their businesses. So it’s going to take time. 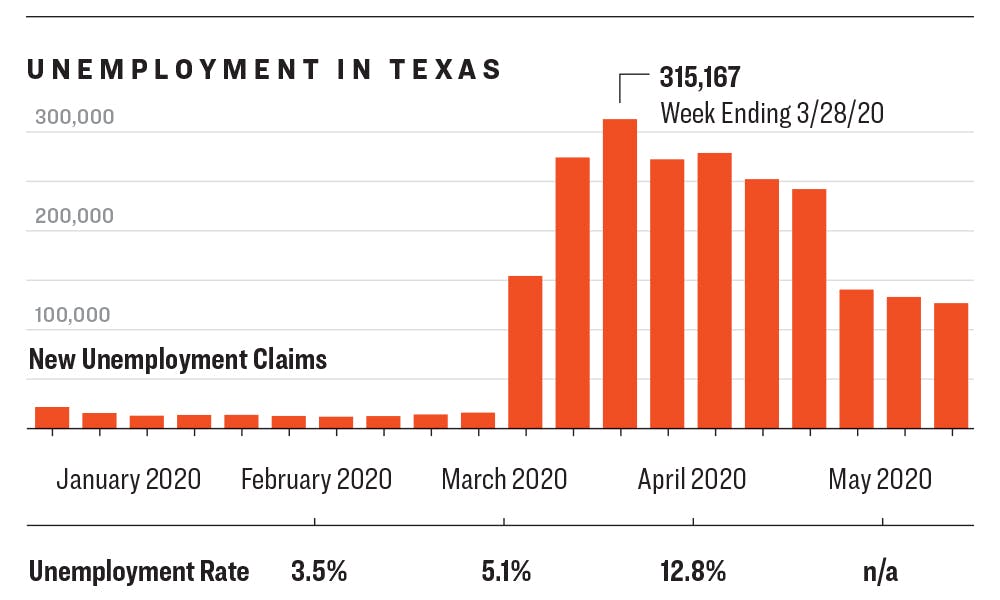 RF: Nobody knows. We have to get people back into the workplace. They have to feel comfortable with our mass transit or just sitting in a space with other people. We put the fear of God into them, and that will take a long time to overcome. And you have to reconfigure those spaces. And the worst thing about making a decision for businesses is uncertainty. We don’t know [to what extent the virus] will come back. We’re being guided by the best medical expertise we can get our hands on, but I can’t give you a time frame. It’s going to be slow and painful.

TM: Let’s talk about the oil markets here in Texas. We saw this dramatic drop in oil prices, to scary levels. How will this situation affect the entirety of the state’s economy?

RF: West Texas is feeling it immediately. It’s been tough on Houston. They’ve pared back their city staff and so on. We’re more fortunate up here in North Texas. We’re not as directly impacted. One statistic you have to bear in mind: only 1 percent of Texas employment is in energy. But it funds our university system, and it accounts for probably 15 percent of our economy overall. Those employees who have been laid off are suffering, but the flywheel of economic benefits that comes off of the energy sector, and the cash that benefits our system, is also hemorrhaging right now.

TM: Do you think Texas is better positioned than the rest of the nation or worse off?

RF: Woe to those who are building those huge skyscrapers in Manhattan, where there’s an incredibly dense population. We have a much more attractive space. We don’t have that population density, and I think that’s to our benefit. I actually would suggest this: if we handle this right, if the governor’s initiatives and the city mayors and the counties and so on are good at bringing the economy back, I believe we will come out a net beneficiary. Who’s going to want to live in New York right now? I love the city, but who wants to be there? So, yeah, I think we come out stronger. We just have to make sure we repair quickly and we repair in a way that acknowledges the new normal.

RF: That’s the sunshine I want to pump, okay?

This interview was adapted from a virtual town hall Texas Monthly cohosted with the Texas Business Hall of Fame.