When former Dallas County Sheriff Lupe Valdez, the Democratic nominee for governor, shows up at the LBJ Presidential Library in Austin tonight for a televised debate with Governor Greg Abbott, she better have in her pocket a medallion for St. Jude, the patron saint of desperate causes. Valdez is trailing the incumbent Republican by 19 percentage points in the polls, and this televised debate is her best chance—possibly her only chance—to salvage what has been all along a long-shot challenge to Abbott’s re-election.

There were many Hispanic male and female politicians in Texas who could have run a credible campaign against Abbott.  Valdez was not one of them. But the others passed because of the past Texas history of Republicans outvoting Democrats and the likelihood that the money probably would not be available to run a competitive effort. So Valdez stepped up. Her campaign against Abbott never got into gear.

So far, all she has offered to voters is a compelling life story. Valdez, age 70, grew up poor in San Antonio, and she overcame obstacles to rise through the ranks in the male-dominated world of law enforcement as a Latina and as a lesbian. When it came to state policy, though, she often has demonstrated a lack of knowledge and spoke in generalized platitudes to appeal to the Democratic base vote.

If Valdez is going to break through tonight, she will have to demonstrate at least a working knowledge of state government. Mastery of some subject would be even better. Interestingly, you may see a sea of blue in the audience as the Abbott campaign indicated Thursday that it gave more than half of its 75 allotted tickets to law enforcement—a none-too-subtle reminder that ten different police associations around Texas, including in Dallas, have endorsed the governor over Valdez, their former law enforcement colleague. Abbott’s campaign also trolled Valdez with a pair of billboards reminding Texans about the news stories that surrounded her missing service pistol, although it turned out she had turned her handgun into the sheriff’s office but it had not been logged into the property room. 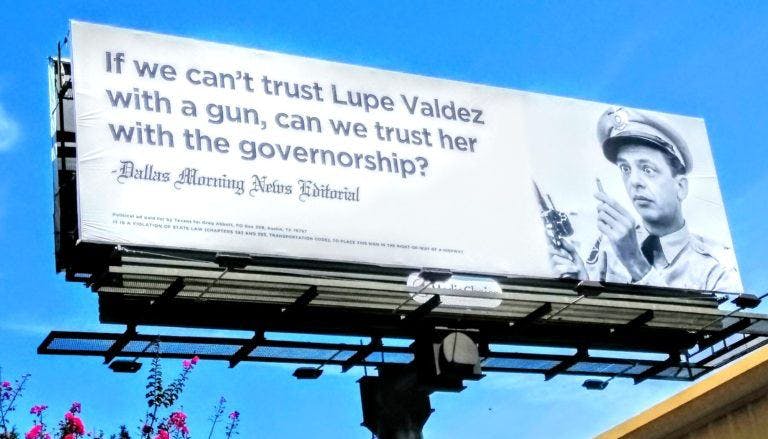 Abbott, age 60, is not without his own compelling life story. A tree fell on him as he was jogging at the age of 26, and he has been paralyzed and used a wheelchair ever since. That did not stop him from winning election as a state Supreme Court justice, as attorney general, and as governor in 2014.

Well known as a micro-manager, Abbott is intimately knowledgeable with the details of state government. Watch for him to use his superior grasp of state issues in an effort to befuddle Valdez and expose her generalizations as based on shallow knowledge and out of step with the majority of the Texas electorate. The biggest hazard for Abbott is to come across as condescending to Valdez.

Abbott has political vulnerabilities that Valdez could exploit. Abbott signed into law the sanctuary cities bill that was popular with conservatives but angered many liberals and Hispanics. He also put on a special session agenda legislation to limit transgender access to bathrooms, a bill opposed by business in Texas as well as members of the LGBTQ community. Abbott also could face criticism over failures that occurred in child protective services on his watch.

Strong points that Abbott likely will make revolve around his leadership during Hurricane Harvey as he pressured both President Trump and the Texas congressional delegation for recovery money. And while he can state support for Trump, Abbott also can note that he differs from the president on issues of free trade.

This may not be the best debate you ever see, but give yourself an hour before you vote.  The debate will be carried from 7-8 p.m. on Nexstar Media Group and Telemundo  television stations across Texas.

What Does Greg Abbott Want With Four More Years?