His name was never uttered, but President Donald Trump was clearly on the minds of both former President Barack Obama and former Secretary of State James A. Baker III on Tuesday night at Rice University, where they held an on-stage colloquy as part of the festivities marking the 25th anniversary of Rice’s Baker Institute for Public Policy. Obama had requested the dialogue as an alternative to giving a speech, a move hailed by the Baker Institute’s longtime director, Edward Djerejian, in his introduction, as “a display of civility in our political discourse, which we sorely need.”

Baker, the veteran Republican stalwart, and Obama, the lifelong Democrat, found common ground on a variety of matters, including American leadership in the world (more vital than ever); international institutions (essential); political partisanship (at an all-time high); the tribalized media environment (regrettable); gerrymandering (dangerous); and respect for the presidency (under threat). On each of those issues, the ideological adversaries found themselves standing together in opposition to their invisible interlocutor, the current president.

Describing the post-World War II, American-led international order—“pluralistic, market-based, rule of law-based”—Obama noted that “Democratic and Republican leaders both believed in those things. That’s the running thread from 1945 all the way to me. There were certain ideals we assumed we had to follow, because that was part of American leadership in the world, and it’s part of what made us a great country. Those are now being contested.”

There was little doubt about who was doing the contesting. “Were you surprised in the past 24 or 28 months or so to see all the attacks [on international institutions]?” presidential historian Jon Meacham, who moderated the event in front of about 1,000 guests, asked Baker, who replied by saying that “we won the Cold War because we had alliances. I don’t think we ought to be denigrating these institutions or attacking them.” Baker and Obama also seemed to agree on the importance of the State Department, which Baker used to lead. “When one of our greatest assets, our Civil Service, begins to get undermined, that doesn’t just weaken our influence, it provides opportunities for disorder to ramp up around the world,” Obama said, as Baker nodded. “It ultimately makes us less safe and less prosperous.”

Baker and Obama didn’t agree on everything. In describing how Washington, D.C. has changed since he served under President Reagan, Baker lamented that congresspeople no longer move their families to D.C., preventing them from socializing as much with members of the opposite party. Obama pointed out that congressional spouses now often have their own careers that prevent them from moving—just as Michelle Obama decided to keep working as a lawyer in Chicago after he was elected to the Senate in 2004. And when Baker seemed to criticize the rise of identity politics, Obama gently suggested that it was white men who pioneered the politics of identity by establishing racial and gender hierarchies in the first place. “Jim Crow was identity politics,” he observed.

But even when they disagreed—perhaps especially when they disagreed—Baker and Obama came across as representatives of a quaint, vanished period of American history when facts mattered, compromise was possible, and politics wasn’t a gladiatorial spectacle. That period surely wasn’t as genteel as Baker’s well-worn anecdotes of Reagan drinking bourbon with Tip O’Neill make it sound. Yet something has changed in our politics. “There’s a civic religion, a set of ideals and principles that we won’t get perfect but that we should strive to perfect,” Obama said. “In the White House, we used to put stickers on people’s binders that said ‘Guard Against Cynicism.’ You have to be realistic, but you can’t be nihilistic.” 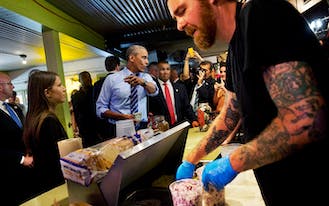