This report was updated to reflect reaction by members of Congress and others.

The Trump administration separated thousands more children and parents at the border than previously disclosed, a government watchdog said in a report released Thursday. The report also said border agents continue to separate families and has provided “limited reasons” for the separation.

The report from the Department of Health and Human Services Office of Inspector General, an independent investigative agency of the government, was the latest in a series of scathing reports about the family separation policies undertaken by the Trump administration last year. The report indicates that the family separations were far more widespread than previously disclosed before April 2018, when Attorney General Jeff Sessions announced a “zero tolerance” policy for people who cross the border illegally. And while thousands of additional separated children have all been released from government custody, it’s not clear how many were reunited with their parents, the report concludes.

“Overall, (the Office of Refugee Resettlement) and (Office of the Assistant Secretary for Preparedness and Response) officials estimate that thousands of separated children entered ORR care and were released prior to the June 26, 2018, court order” that ended family separation, the inspector general report said. “Because the tracking systems in use at that time were informal and designed for operational purposes rather than retrospective reporting, ORR was unable to provide a more precise estimate or specific information about these children’s placements (for example, whether the children were released to sponsors who were relatives, sponsors who were nonrelatives, foster care, etc.).”

A spokeswoman for the Department of Homeland Security, the agency responsible for separating children from their parents, criticized the HHS inspector general report and called the office’s credibility into question.

“The report vindicates what DHS has long been saying: for more than a decade it was and continues to be standard for apprehended minors to be separated when the adult is not the parent or legal guardian, the child’s safety is at risk or serious criminal activity by the adult. We are required under the law that Congress passed to send all unaccompanied alien children to HHS.  For the HHS OIG to claim it was not known that as a result of DHS actively enforcing this policy in the same manner for more than a decade…casts doubt on the HHS OIG’s credibility on this topic.  The report will hopefully help inform future reporting and correct the myriad misconceptions around zero-tolerance and family separation that persist despite the facts,” DHS spokeswoman Katie Waldman said.

In a statement to Texas Monthly, the HHS Office of Inspector General rejected Waldman’s criticism and said the report “accurately reflects a lack of transparency about the number of separated children.” The inspector general’s office said, “OIG’s report did not find that HHS was unaware that children were sometimes separated by DHS, and had been separated by DHS in the past for reasons related to the child’s safety. OIG, however, did report that HHS staff observed a significant increase in the number of children separated by DHS and referred to HHS for care beginning in summer 2017.”

The revelations drew almost immediate reactions from Democratic members of Congress. “Today’s report publicly confirms what many of us in El Paso believed: the Trump administration misled the American people,” U.S. Representative Veronica Escobar, D-El Paso, said in reacting to the report.

U.S. Representative Joaquin Castro, D-San Antonio, and chairman of the Congressional Hispanic Caucus, called for congressional hearings into the revelations.  “I’m outraged—as all Americans should be—about this new report that reveals that thousands more children were separated from their families in a practice that started well before former Attorney General Sessions instituted the zero-tolerance immigration policy. All Administration officials involved in hiding this information requested by Congress must immediately come before lawmakers to explain their decisions.”

The new report is “infuriating,” said Representative Rosa DeLauro, a Connecticut Democrat who chairs the House Appropriations subcommittee that oversees HHS. “It is clear the Department of Health and Human Services did not have a clue as to how to reunite the children they were cruelly separating at President Trump’s insistence. They cannot even tell us how many children they separated. This is government-sanctioned child abuse, and the whole ordeal is a stain on our nation and our values,” said DeLauro, who added that she was “committed to using every oversight tool available to the legislative branch to get to the bottom of this and to make sure it never happens again.”

Representative Lucille Roybal-Allard, D-California and chair of the Appropriations subcommittee overseeing DHS, said the report “reveals heartlessness and carelessness on a level even beyond what we had known.  Not only did this administration take thousands more children away from their parents—it failed to keep information about the total number and current status of children separated from their parents or guardians. That’s unconscionable and inexcusable.”

The inspector general report said that in the summer of 2017, staff at ORR—the agency that cares for children who arrive at the border without parent or guardian—began noticing a large increase in the numbers of children who had been separated from their parents and placed in government custody. “The increase in separated children posed operational challenges for the (unaccompanied alien children) program. In a November 2017 email that OIG reviewed, an ORR official stated that separated children were often very young, that these younger children required placement at specially licensed facilities, and that ‘the numbers of these very young UAC resulting from separations has on some dates resulted in shortfalls of available beds,’” the report said.

The inspector general made no recommendations in the report, including whether the agency should follow up on the additional thousands of children separated from their families. Lynn Johnson, the assistant HHS secretary for the Office of the Administration of Children and Families, said the government hasn’t tried to put a specific number on the total number of separated families “as ORR has only limited resources, and counting prior DHS separations would take away from ORR’s primary focus on caring for the children currently in ORR care and promptly discharging them to appropriate sponsors.”

Dr. Julie Linton, a South Carolina pediatrician and co-chair of the American Academy of Pediatrics’ Immigrant Health Special Interest Group, said the government has an obligation to account for all separated children and attempt to reunify them with their parents. “DHS should be mandated to share minimum critical information with Health and Human Services so that children can be reunified with a suitable sponsor as quickly and as safely as possible. We need to remember that first and foremost, no child should ever be separated from his or her parents unless the safety of that child is at risk. There’s a lot of discussion about parents who have committed quote, crimes, unquote. But what I would say is that the civil concern of crossing a border is quite different from what I would define as a crime that threatens the health and well-being of a child,” Linton said.

Christi Grimm, the chief of staff for the HHS inspector general, said the report on Thursday was part of a series of reports that will be released in coming months regarding family separation and how the government cares for children apprehended at the border.

Because the HHS system for identifying and tracking separated children was informal, the inspector general was unable to provide a more specific number of how many children were separated before Sessions’ April 2018 announcement. A class-action lawsuit filed by the American Civil Liberties Union last year covers about 2,800 families of children who were in government custody as of last June. Families with children who were separated and released before June aren’t part of the class-action suit, and the government has never provided a specific number of such children.

“This report confirms what we suspected: This cruel family separation practice was way bigger than the administration let on,” said Lee Gelernt, the lead ACLU attorney in the lawsuit. “We will be back in court and ask the judge to order the government to explain these numbers,” he said.

In announcing the zero tolerance approach last year, administration officials said they had conducted a pilot test of the policy in 2017 in the El Paso Border Patrol sector, which includes far West Texas and all of New Mexico. A report by the Government Accountability Office last year said the Border Patrol reported that 281 children were separated in 2017 as part of the El Paso pilot project. The GAO report and one from the DHS inspector general previously painted a picture of a chaotic approach to family separation.

The HHS inspector general report issued Thursday said thousands of children were separated in 2017 and early 2018, suggesting the family separation practice extended well beyond El Paso before Sessions’ April 2018 announcement. “The numbers make clear that there were family separations far beyond what was happening in an El Paso pilot and there’s never been any clarity on what that was, when it started, how long it went on and how many families were affected by it,” said Mark Greenberg, who was acting assistant secretary for the Administration for Children and Families under the Obama administration.

The HHS inspector general report also found that separations have continued since a court order last June blocked the widespread family separation practice, though at a much slower pace. The report said 118 separated children were placed in HHS custody between July 1 and November 7 last year, including 27 children under age 5. “Based on our review of ORR tracking data, DHS reported to ORR that 65 of the 118 children were separated because the parent had a criminal history. In some cases, DHS did not provide ORR with details about the nature of the criminal history. Other reasons DHS provided to explain the family separation included the parent’s gang affiliation (18 children), illness or hospitalization (13 children), immigration history only (3 children), or other factors (19 children), such as a parent presenting a fraudulent passport or an adult claiming to be a legal guardian without proof; in some cases, little detail was provided,” the report said.

The lack of detailed explanation for the separation was troubling, according to the report:  “Incomplete or inaccurate information about the reason for separation, and a parent’s criminal history in particular, may impede ORR’s ability to determine the appropriate placement for a child. When a proposed sponsor (including a parent) has a criminal history, ORR policy is to evaluate the severity and type of crime and the length of time that has passed since the criminal act, along with any mitigating factors. ORR officials and staff noted that from a child welfare perspective, not all criminal history rises to a level that would preclude a child from being placed with his or her parent. ORR officials stated that when DHS provided insufficiently detailed explanations for a child’s separation, ORR staff would contact DHS for follow-up information. However, the spreadsheet we reviewed indicated that DHS did not always respond to these requests for follow-up information.”

DHS spokeswoman Waldman said the agency has specific guidelines on determining risks to child safety that could lead to separation of parent and child, but declined to provide them to Texas Monthly because they’re “law-enforcement sensitive.” 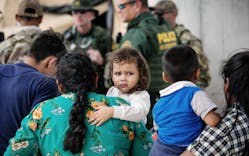 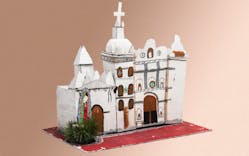 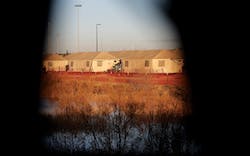 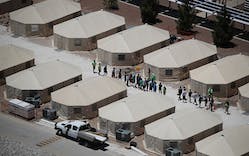 Tornillo’s Tent City No Longer Houses Children, But Facilities Like It Aren’t Going Away