Where to Find the Coolest Shops in Houston’s Heights

For almost two years, visitors to the campaign website of Harris County Clerk Stan Stanart have been greeted by a ghoulish photograph of Hungarian-American investor George Soros, his hands reaching toward the camera as if to strangle the viewer. Beneath the photo was an ominous warning—“George Soros is Coming…”—and beneath that was a statement claiming that “George Soros wants to control Harris County Elections and Stan Stanart is in his way.”

The website attracted little attention until October 10, when the Houston Chronicle editorial board, in endorsing Stanart’s opponent, slammed the website’s “fear-mongering,” arguing it “panders to anti-Semitic conspiracy theories” and dismissing claims of Soros wanting to control Harris County elections as “bizarre and inaccurate.” A series of Soros-related incidents last week drew renewed scrutiny: On October 22, a pipe bomb was discovered in the mailbox of Soros’s mansion in a suburb of New York City, one of fourteen such devices believed to have been mailed by Cesar Sayoc. Five days later, a gunman killed eleven people at the Tree of Life synagogue in Pittsburgh, reportedly inspired by a debunked conspiracy theory about wealthy Jews funding the migrant caravan.

In reaction to that tragedy, Stanart added a statement to his website’s home page—directly to the right of the ominous Soros photograph—declaring himself “a long time friend of Jews in America and throughout the world” and condemning the “senseless act of violence against the Tree of Life Congregation and Jewish community in Pittsburgh.” 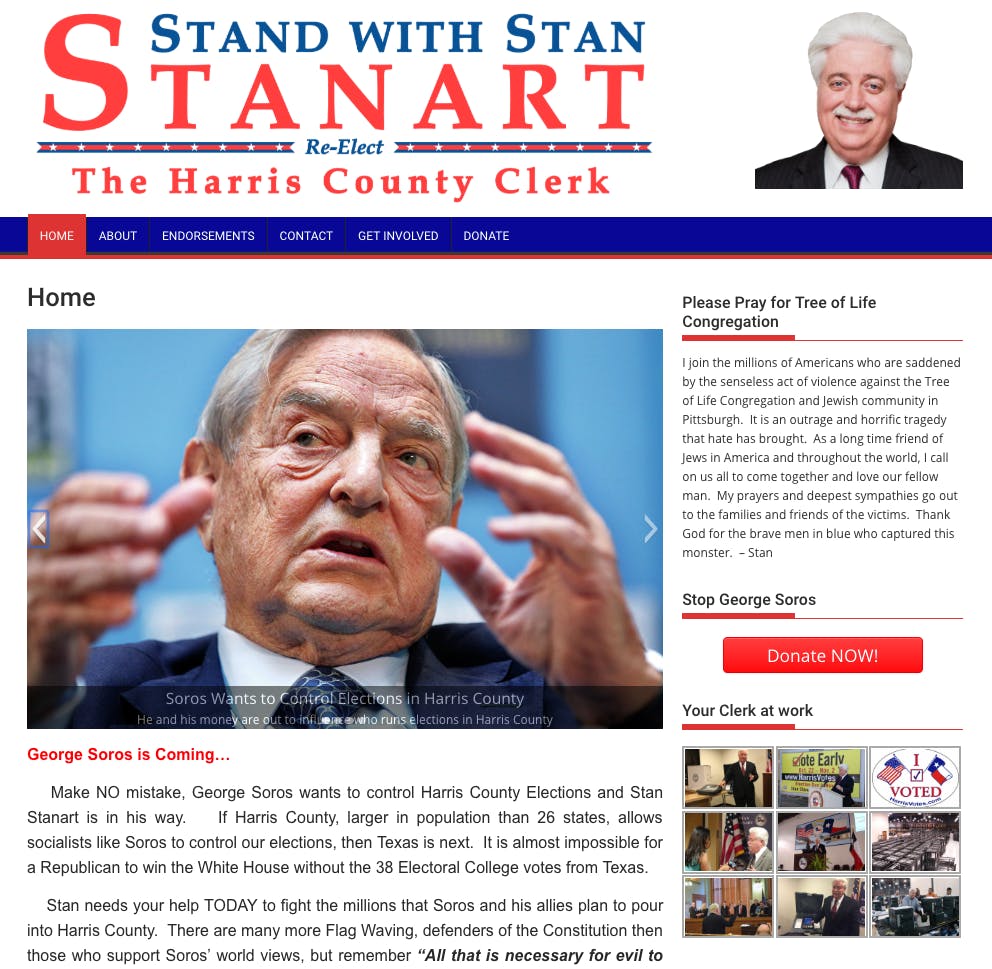 That wasn’t enough for Rabbi Jill Levy of Houston’s Evelyn Rubenstein Jewish Community Center. On Tuesday, she emailed Harris County Judge Ed Emmett, a Republican also up for re-election, to express her anger at Stanart’s website. (The email chain was provided to Texas Monthly by Judge Emmett’s office.) “I was dismayed to learn that you endorse Stan Stanart, who has anti-Semitic conspiracy theories about George Soros on his website,” Levy wrote. Emmett responded by saying he didn’t find the post to be anti-Semitic, while acknowledging that “a few other people have written me almost identical emails.”

Levy replied with a long e-mail patiently explaining the long history of anti-Semitic conspiracy theories and providing examples of right-wing extremists making anti-Semitic slurs against Soros. Emmett agreed to talk with Stanart about toning down his language, admitting that “the rhetoric on all sides has gone beyond the bounds of reason.” Emmett’s intervention appears to have worked, with Stanart removing the photograph of Soros sometime before Wednesday morning. He replaced all mentions of Soros with the phrase “Liberal Socialist Democrats” and inserted new photographs of Nancy Pelosi, Chuck Schumer, Elizabeth Warren, and Bernie Sanders. (Multiple inquiries to Ed Emmett campaign headquarters asking whether the judge was still endorsing Stanart were not returned.)

For his part, Stanart said he originally singled out Soros because of his donations to Democrat Kim Ogg’s successful 2016 campaign for district attorney. “George Soros put half a million dollars into the DA’s race in 2016,” Stanart explained. “He meddled in politics in Harris County.” He said he put the photograph up shortly after the 2016 election and kept it there so long because he was “too busy to go back and change my website.” He called charges of anti-Semitism “the biggest piece of lie you can have. […] There’s nothing anti-Semitic on that website. I am pro-Israel. I have many Jewish friends.”

But after reviewing screenshots of the old website, University of Maryland historian Jeffrey Herf, a scholar of anti-Semitism, found the Soros imagery and rhetoric disturbing. “To say that George Soros wants to control elections in Harris County is just ridiculous. It implies Soros has enormous power and influence, but there’s nothing nefarious or underhanded or sinister about people who contribute money to a campaign.” Soros also “fits the stereotype of the Jewish banker who is all about moving money around. Plus he’s from Hungary, he’s international.”

Rice University political scientist Mark Jones said that attacking Soros has proven an effective way to mobilize Republican voters. Not only is Soros a liberal billionaire who spends money to elect Democrats, but “there’s the added subliminal bonus that he’s Hungarian and he’s Jewish. That specter may reach a different audience than if you were villainizing a Tom Steyer.” As University of Houston political scientist Brandon Rottinghaus put it, “there’s this specter that Soros is going to come and spend a bunch of money and take over an election.”

Stanart may have taken down the Soros image from his website, but he hasn’t changed his opinion of the billionaire: “He meddles in politics across the country. He put a substantial amount of money in Harris County the last election cycle. [….] The actual pathway for how he’s currently doing things is not clear, I’ll admit that. But he has meddled in Harris County politics.” 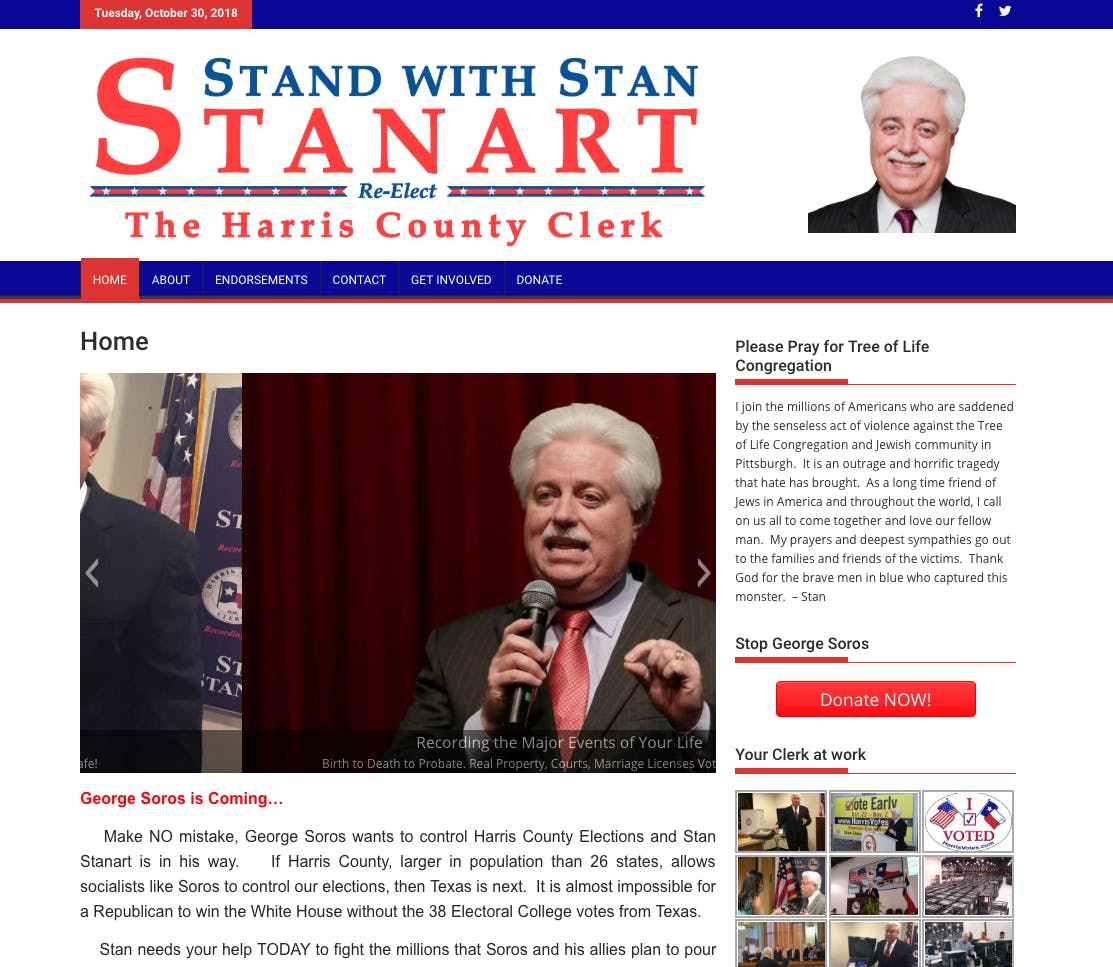