Robert “Bob” McNair, a businessman and philanthropist who became one of Houston’s biggest boosters and brought professional football back to Texas’s largest city after it lost its Oiler franchise, died on Friday. He was 81 years old.

“It is with deep sadness that we announce Houston Texans Founder, Senior Chairman and Chief Executive Officer and philanthropist, Robert C. McNair passed away peacefully in Houston today with his loving wife, Janice, and his family by his side,” the Houston Texans tweeted just after 5:30 p.m.

It is with deep sadness that we announce Houston Texans Founder, Senior Chairman and Chief Executive Officer and philanthropist, Robert C. McNair passed away peacefully in Houston today with his loving wife, Janice, and his family by his side. pic.twitter.com/7J9PWoxKZv

While the cause of death was not immediately disclosed, McNair had been very public about his battles with leukemia and squamous cell carcinoma in recent years.

“He was a very caring, thoughtful and passionate individual,” Texans’ coach Bill O’Brien said in a statement to the Associated Press. “As much as he cared about winning, I think the thing I will remember most about Mr. McNair is the way he cared about the players.”

After the Houston Oilers moved to Tennessee following the 1996 season, McNair made it his mission to bring professional football back to the state’s largest city. He formed Houston NFL Holdings and in 1999 convinced the NFL to award Houston the league’s 32nd franchise, which became the Houston Texans and played its first game in 2002 against the Dallas Cowboys.

“He was the reason professional football returned to Houston and he (led) our franchise with a laser focus on honesty, integrity and high character,” team president Jamey Rootes said in a statement to the Associated Press. “He was an amazing champion for Houston and worked hard to make sure our city received maximum value from the presence of the Texans and the NFL.”

McNair also convinced his fellow team owners to award the Super Bowl to Houston in 2004 and again in 2017. “McNair was actively involved in league affairs including serving as chairman of the Finance Committee and a member of the Audit, Compensation and Chairman’s committees,” the Texans franchise said in a statement.

But his commitment to the NFL also sucked him up into controversy as the league dealt with the festering issue of how to handle its players who chose to take a knee during the playing of the national anthem in protest of police treatment of black people. He received a great deal of criticism last year when he said during a meeting with NFL owners, “we can’t have the inmates running the prison.” He later apologized for the remarks, and then, this past summer, said he regretted the apology, claiming that his comment had been a reference to NFL executives, not players.

Former President George H.W. Bush, referencing the Points of Light foundation he founded, released a statement today stating that “Bob McNair wasn’t just the brightest point of light in Houston; he was one of the kindest and most generous people anywhere. Nobody cared—or helped people—more, and that’s just one of the reasons I will always be proud Bob was my good friend. He was simply the best.”

In addition to his high profile as the Texans’ owner, McNair was a major philanthropist. “Throughout his life, McNair and his charitable foundations generously gave more than $500 million to a wide array of scientific, literary, educational and faith-based organizations,” the team franchise said in a statement. “McNair chaired The Robert and Janice McNair Foundation, the Houston Texans Foundation and The Robert and Janice McNair Educational Foundation for more than 25 years.”

McNair was born in Florida, raised in North Carolina, and graduated from the University of South Carolina in Columbia in 1958 with a bachelor of science degree. He and his wife Janice moved to Houston in 1960 where he founded Cogen Technologies, a company he sold to Enron in 1999 for $1.5 billion. 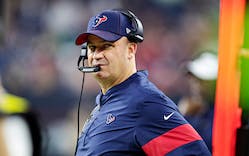 What if the Texans’ Bizarre Offseason Wins Them the Super Bowl?