One day after the head of U.S. Customs and Border Protection said handling the influx of migrant families “is not sustainable,” there was a run on gloves at the Humanitarian Respite Center in McAllen.

With temperatures dipping into the 50s in South Texas, migrant children from the tropical climate of Central America who had been released from immigration custody with their parents were underdressed and not accustomed to the chill. So when word got out that someone had donated fluorescent-colored kids’ gloves to the respite center, its executive director, Sister Norma Pimentel, was besieged with requests for a pair.

A day earlier, Customs and Border Protection commissioner Kevin McAleenan held a press conference in Washington to announce that Border Patrol apprehensions on the Mexican border had reached an eleven-year high in February, with more than 66,000 migrants—mostly families—making up the bulk of those numbers.

What was unsaid was that tens of thousands of those migrants released from custody seek services from organizations like those run by Sister Norma and Catholic Charities of the Rio Grande Valley, for which she serves as executive director.

If CBP cannot sustain this influx of migrants with more than 60,000 employees and an annual budget north of $16.5 billion, I wanted to see how a seat-of-its-pants operation like the Humanitarian Respite Center got along.

“I truly trust that what we’re doing is what God is asking us to do,” said Sister Norma, as she stood next to a makeshift dining hall filled with hundreds of migrants eating chicken soup.

For Sister Norma, it’s faith and not politics that keeps her motivated to serve in the midst of chaos, confusion, and the constant cacophony of crying children. She recalled a day recently when just her and a single staff member were at the facility and a bus from Immigration and Customs Enforcement pulled up in front of her facility and dropped off a load of recently released migrants.

“She said, ‘Sister, what are we going to do?’” Norma recalled her staff member asking. “I said, ‘You and I. We’re going to take care of it.’” A little while later, a group of ten to fifteen men arrived to volunteer their help. “I thought when we started in 2014, it was just for a couple of days,” she said. “We’re still at it a couple of years later—I don’t know how long it’s going to continue. It’s not up to me. If there is a family that arrives and needs help, I’m here, and if I have the strength, I’m going to help.”

There was something spiritually validating about this place and the community support that it has—and I witnessed it several times with several people over the course of a twelve-hour day.

There’s people like Joe Karner, a 71-year-old retiree from Grand Island, Nebraska. Karner is a Winter Texan, a breed of retiree that annually travels in recreational vehicles from as far away as Canada to winter in the more accommodating climate of South Texas. “My wife and I came last year when she said she was looking for something to do,” he said. “We’ve been volunteering ever since—twelve hours a day, seven days a week.”

Karner is now in charge of the infant room, which warehouses diapers, bottles, and baby formula. In the past four days, he said, more than 2,200 migrants have streamed through the facility, wiping out donated goods and clothes. A popular Latin American brand of baby formula, called Nido, was running low, so Sister Norma put a call out on social media for donations. On Wednesday, Karner spent most of his morning restocking the room with a surge of donated Nido.

Karner shared some of the newfound spoils with 22-year-old Ana Valencia-Vasquez, who had just arrived with her eight-month-old son, Jose Valencia, following an eight-day journey from El Salvador. Valencia-Vasquez was a tiny woman caring for a tiny baby. She’s not sure where in Texas she crossed the Rio Grande with two others and with her son on her back in a tiny boat. But she does know that once in the United States, she walked four hours before she saw any semblance of civilization—and a Border Patrol agent to whom she surrendered. She’s apprehensive as she shares her story, but seems more engaged when asked about her dreams for life in the United States. She wants to own a car, she said—and maybe own some other things.

Mother and son rest on a padded mat on the floor of a room that has at least three other families. This facility used to be a nursing home until Sister Norma took it over to accommodate the growing load of migrants. Last month, city officials ordered Sister Norma to vacate the place because a nearby neighborhood complained to city officials about the increased traffic. City officials promised to find a new place.

On this day, four busloads of migrants with at least 300 people each were unloaded at the respite center after being released from custody by Immigration and Customs Enforcement. With military efficiency, volunteers went to several stations to line up people looking shell-shocked after spending time in detention facilities. None of them have shoelaces. As a precaution against suicide, immigration authorities confiscate the shoelaces and don’t return them.

The migrants are split into two lines based on the paperwork they carry: one line is for those who have transportation to another city arranged, the second line is for those who need to make arrangements. A volunteer steps up to the group and welcomes them by way of explaining the purpose of the respite center. “We’re here to connect you with your families,” she explained in Spanish as one volunteer handed out H-E-B bags filled with toiletries while a second volunteer handed out shoelaces.

Older kids are peeled away from the group so that they can eat a meal. Younger kids will eat with parents. All are invited to take a shower in a portable facility just outside—”No more than three minutes, please, so there’s enough hot water for all.”

As arrivals acclimate, departures are just as constant. There’s a bus schedule posted on the wall. Some bus companies have begun dropping by the respite center to load up with passengers, many of whom carry small travel bags filled with sandwiches and snacks for cross-country journeys. A Catholic Charities van constantly shuttles families to the McAllen bus station about sixteen blocks away.

The weather outside remains cool, and people ask for proper clothes. Sister Norma asks me how often it gets cold in Georgia, and I reply, “Not too often.” So she declines a person’s request for gloves, rationing them for those headed to colder places. She’s about to put out another call on social media for clothing donations, as little girls’ clothes in particular have dwindled to nothing. And right on cue, a 20-foot U-Haul truck pulls up, its inhabitants jumping out with a sense of accomplishment. “We just drove 26 hours from DuPage County, near Chicago,” announces Mike Johnson, a retired truck driver. They open the back of the truck, which is filled with clothes donated from twenty churches in Illinois.

It’s the support of the local community that injects another sense of pride. Denise Chang, a volunteer from Denver, was introduced to the respite center while visiting a friend, Mayra Garza, who has been a fixture here since the respite center opened four years ago with the first surge of families and unaccompanied minors from Central America.

Garza is on hand for most evening meals and isn’t shy about lecturing the gathered migrants that there are certain norms in this country, one of which is that people clean up after themselves. Another norm that Garza doesn’t mention is the one about generosity, a norm she has been practicing day after day, seven days a week for the better part of four years now. Garza now makes daily calls to friends, friends of friends, and businesses until she raises enough money and other donations to feed the nightly gathering of migrants—typically between 60 and 80 pizzas and any other donated food that local stores and restaurants give. “I don’t like going hungry,” Garza said of her motivation. “And these people are hungry.”

Chang summed up the efforts by her friend and other volunteers as a purity of the mission to help others that “makes this the best place in the United States. It makes me proud to be an American.” 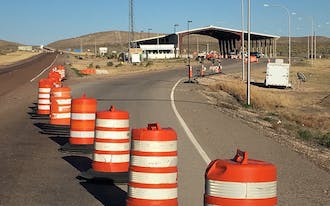 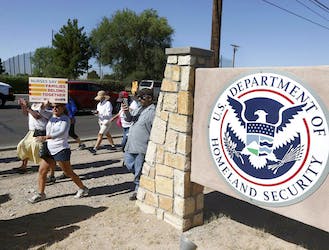 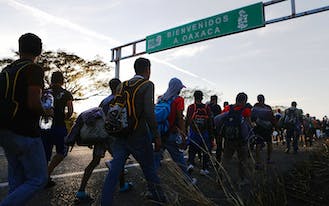 Houston Is Being Hit by an “Invisible Hurricane.” But Residents Aren’t Responding as They Did for Harvey.