BREAKING: I just talked with the management at the Tornillo facility – the last kid just left. This tent city should never have stood in the first place but it is welcome news that it will be gone.

Since early October, Joshua Rubin has camped outside a tent facility in the El Paso County town of Tornillo that has housed thousands of migrant children, seeking to bear witness to what he considered an awful injustice. The 66-year-old software developer from Brooklyn watched the daily movement of the camp and noticed that the children enjoyed their only moments of freedom on the soccer field.

“One of the things that struck me every time is how much effort those kids spent in kicking those balls over the high nets that they put up, over to freedom. You go around back there (beyond the camp fence) and you’re going to find dozens of soccer balls that have been kicked out. It takes a special effort to get them out, but symbolically it was quite moving to see,” said Rubin, who created a Facebook page called “Witness: Tornillo” to document what he and others were seeing. The balls booted to freedom often bore the signatures of children who were interned at the facility, many of them for months.

Now, the children are following the soccer balls into freedom. Though the Trump administration won’t commit to a closing date, the last of the 6,200 children held there since June are likely to leave this weekend, according to two sources familiar with the operation of the tent facility, who asked not to be identified because they weren’t authorized to speak publicly. The government says about 850 children remained in Tornillo as of Monday, though the sources said the number dropped below 400 on Wednesday, down from a peak of 2,800 in mid-December. The tents and other temporary structures that have been set up since June at the Marcelino Serna Port of Entry are expected to be gone by the end of the month. A detention camp that became the symbol of perhaps the largest mass incarceration of children not charged with a crime since the Japanese-American internment of World War II will soon become history.

“What I hope the world remembers about the Tornillo tents is that they were a child incarceration facility, a child jail, in the 21st century,” said Georgina Cecilia Pérez, a Texas State Board of Education member who lives in Tornillo. “I also hope the world forever tells the story of not only the universal outrage but the endless dedication and efforts of the El Paso community to shut it down, reunite families, and protect children.”

The tents started springing up in Tornillo on June 10, 2018, as the Trump administration was taking migrant children from parents who were accused of entering the country illegally. The site initially had 400 beds, but the Trump administration planned to expand it to 4,000. Officials dangled a billion-dollar, no-bid contract to two Texas companies, but both declined, Texas Monthly reported in late June.

Protesters—including politicians and Hollywood celebrities—swarmed to the remote site, which became for many a living symbol of the administration’s family separation policy. But Tornillo never held more than a few dozen children taken from their parents. The Trump administration ended the controversial practice two weeks after it had opened Tornillo, and a day after it failed to find a taker for its huge no-bid contract to expand thefacility.  But the end of family separation had little impact on Tornillo, because other administration policies that received less attention than family separation were swelling the numbers of migrant children held by the government.

Shortly after Tornillo opened, the administration began implementing new rules for finding sponsors for what the government calls “unaccompanied alien children,” who arrive at the border without a parent or guardian. (As part of family separation, the Trump administration reclassified children taken from their parents at the border as unaccompanied minors.) The number of Central American children entering the United States without parent or guardian exploded in 2014 and has fluctuated since then.

Unaccompanied children are placed with an agency called the Office of Refugee Resettlement, part of the U.S. Department of Health and Human Services. The children usually are placed in one of more than 100 shelters set up across the country, including 35 in Texas. Occasionally, children have been placed in so-called “influx shelters,” temporary facilities utilized when the numbers of unaccompanied children surged. The Obama administration established such a shelter at Fort Bliss near El Paso in September 2016 during the last major surge of unaccompanied children; it closed shortly before Donald Trump became president in January 2017. Like Tornillo, the 1,800-bed Fort Bliss facility was operated by BCFS Health and Human Services, a San Antonio-based nonprofit that specializes in disaster relief efforts.

The total number of unaccompanied children apprehended in fiscal year 2018, which ended September 31, was just over 50,000, a 21 percent increase over the prior year. However, those numbers were well below 2014 and 2016, the other two major surges. New policies were lengthening the amount of time children were held by the government before being placed with a sponsor – growing from an average of 30 days at the end of the Obama administration to 75 days by December. The main cause of the delay was a major policy shift that turned the Office of Refugee Resettlement—which was responsible for unaccompanied migrant children—from a social welfare agency into one that became part of the Trump administration’s immigration enforcement efforts.

Texas Monthly first detailed the policy changes in late June. In the past, potential sponsors of unaccompanied minor children—usually a parent or other family member in the United States—had to pass an ORR background check to ensure they could provide a safe home. A family member other than a parent who wished to sponsor a child had to submit fingerprints as part of the background check. But the Trump administration began requiring fingerprints of all potential sponsors, as well as any other adult in the household. Under a memorandum of agreement signed in April, ORR agreed to share fingerprints and other data with Immigration and Customs Enforcement, an unprecedented action.

Experts warned that such a step would deter many potential sponsors because their households often include undocumented immigrants. “In the last administration we felt that it was important that the Office of Refugee Resettlement not be functioning as a partner in immigration enforcement because that wasn’t what the program was supposed to do,” Mark Greenberg, who oversaw the unaccompanied migrant program at the end of the Obama administration, told Texas Monthly in June. “The program was supposed to provide shelter and services to children and help them get to a parent or other sponsor. And it would completely defeat those goals if parents and other sponsors were afraid to come forward because of immigration enforcement.”

The warnings from Greenberg and others were borne out. Potential sponsors were increasingly reluctant to expose themselves or other family members to deportation. ICE acknowledged in December that it had arrested at least 170 people it learned about because of the sponsor fingerprinting program. The number of migrant children in ORR custody grew from about 3,000 at the outset of the Trump administration to 9,000 just before family separation began and then to 15,000 in mid-December. Tornillo was expanded from its 400 original beds to 500 in August, then 3,800 in September.

On December 18, 2018, the administration backed off the requirement that all household adults provide fingerprints, acknowledging that the requirement had little value and was delaying the release of children to their families. The policy reversal appeared driven at least in part by BCFS, the nonprofit running the Tornillo shelter under contract with the government. BCFS officials made clear in November that they wanted out of the contract, then began pressing the Trump administration to relax the fingerprint process as a way of reducing the number of children in custody and clearing the way for an end to Tornillo.

Since mid-December, the number of migrant children in government custody has dropped from the record high 15,000 to about 11,400 as of Monday, HHS spokeswoman Evelyn Stauffer said. That is getting close to the number of beds in ORR’s network of permanent shelters, but the agency is keeping open a second temporary facility at Homestead, Florida, near Miami. That facility housed 850 children as of Monday, down from about 1,300 in December. The administration plans to add 1,000 beds to Homestead in the coming months, bringing its capacity to 2,350.

The rapid expansion of migrant children in government custody over the past year has proven costly. The Trump administration had to divert almost half a billion dollars from medical research and other Health and Human Services programs to cover unbudgeted costs in fiscal year 2018. The cost to operate Tornillo was at least $144 million between June and November, BCFS officials told Texas Monthly. December figures aren’t yet available but are likely to approach an additional $50 million or more, given known population figures that month and BCFS’s estimate that it costs $775 a day to house a child in Tornillo.

The American Academy of Pediatrics has warned that the thousands of children detained at Tornillo and elsewhere, especially those held for months, will face continuing risks to physical and emotional wellbeing. “Qualitative reports about detained unaccompanied immigrant children in the United States found high rates of posttraumatic stress disorder, anxiety, depression, suicidal ideation, and other behavioral problems,” AAC said in a 2017 report. ORR says children and sponsors have access to post-release services, including behavioral health care.

Migrant children and their caretakers are not the only ones leaving Tornillo. Rubin, the Brooklyn software engineer who kept vigil in a small camper since October, left on Monday. He said he promised his wife he wouldn’t stay more than three months. Rubin said he will continue his mission to ensure that Americans don’t forget what happened at Tornillo in 2018. “The thing that always struck me is that the government has an odd and inconsistent narrative. It says first that these are very, very dangerous people that we have to confine. And then it says we have to protect them, and we have to keep them a really long time in confinement, to protect them from what are essentially their families,” Rubin said. 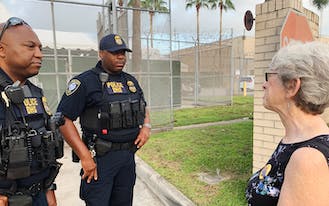 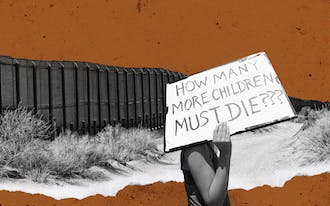 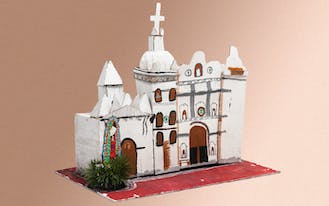