Two key Democratic members of the House Appropriations Committee are demanding that the Trump administration close a controversial West Texas shelter, outside of El Paso, housing more than 2,000 migrant children.  “There is no justification for keeping Tornillo open,” representatives Rosa DeLauro of Connecticut and Lucille Roybal-Allard of California said in a letter on Tuesday to Health and Human Services Secretary Alex Azar.

Both members of Congress said they were particularly concerned by a recent report from HHS’s inspector general “exposing that the Administration has waived child abuse and neglect checks for more than 2,000 staff members and allowed employees and contractors without FBI fingerprint checks to be in regular and close contact with children.” HHS officials acknowledged receipt of the letter and said they were reviewing it.

DeLauro is the ranking Democrat on the Appropriations subcommittee overseeing HHS, while Roybal-Allard is the top Democrat on the subcommittee overseeing the Department of Homeland Security. Their influence will increase when Democrats become the majority party in the House in January. In their letter, they said “we will be conducting strict oversight in the new Congress on the administration’s care of migrant children and will be looking closely at limiting the administration’s ability to perpetuate the mistreatment of these children.”

DeLauro and Roybal-Allard noted in their letter that potential sponsors in the country who could care for the children are subject to fingerprint checks, but not people hired to care for children at Tornillo. “We cannot take the administration seriously when it says it implemented its new policy of fingerprinting parents, other potential sponsors and household members for the sake of children’s safety when it has made a conscious choice to waive background checks for thousands of adults working in close contact with minors at Tornillo,” they wrote.

Representative Will Hurd, a Texas Republican whose district includes Tornillo, also has been critical of the administration over the facility. “All of that is a symptom of a larger problem, and the larger problem is policy changes by this administration, taking too long to evaluate and process the cases of some of these kids, or finding a family member for these kids or working with those host governments and repatriating those kids back to their home counties. So that is what is creating the problem. Let’s address those root causes and you won’t have to deal with the symptom. So that’s how you alleviate the issues that we’re dealing with at Tornillo,” said Hurd, who also called for an effort similar to the Marshall Plan after World War II to address poverty, violence and instability in Central America that is causing tens of thousands of people to leave their home countries.

The tent facility in Tornillo opened in June, during the Trump administration’s “zero tolerance” border policy, to handle children who arrived at the border without parents or guardians, or children who were forcibly separated from their parents by border agents. The facility operates largely out of public view at the Marcelino Serna Port of Entry in Tornillo, and is run by BCFS Health and Human Services, a San Antonio-based nonprofit.

Tornillo originally had 400 beds, but has been expanded twice and now has 3,800 beds. BCFS officials have said the facility currently houses about 2,300 children. BCFS’ current contract runs through December 31. In an interview last week, BCFS spokeswoman Evy Ramos told Texas Monthly that her organization so far has not agreed to an extension beyond the end of this year. “We don’t want to be there, but we can’t abandon the children,” she said.

It’s not clear what would happen if HHS closed Tornillo at the end of the year. More than 14,000 migrant children are now in the custody of the Office of Refugee Resettlement, an HHS agency that is tasked with overseeing unaccompanied minors, and the government only has about 11,000 beds in permanent shelters for migrant children.

The number of migrant children in government care has exploded in recent months as the Trump administration instituted new policies that made it much more difficult to place them with sponsors, usually family members. The biggest hurdle is a new requirement that potential sponsors submit their fingerprints, as well as fingerprints of any adults in the household, for inspection by Immigration and Customs Enforcement. Many sponsors have undocumented immigrants in their households and ICE has acknowledged making some arrests of people who stepped forward to sponsor a child. 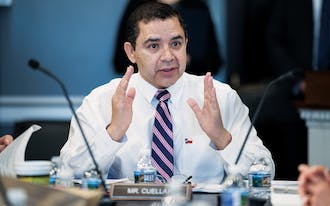