The affidavits were submitted by the American Civil Liberties Union as part of an ongoing lawsuit that led to the reunification of hundreds of parents and children who were separated earlier this year as part of the Trump administration’s “zero tolerance” approach to border enforcement. The ACLU is asking U.S. District Judge Dana Sabraw to prohibit parents or children from being deported for at least seven days after they’ve been reunified, and to include parents who purportedly waived reunification in that order. That would allow parents and children time to meet with lawyers to decide whether those facing deportation will take their children with them, or leave the children in the United States to pursue their own attempts to stay in the country. The Trump administration opposes the request, saying the families have had enough time to make such a decision.

“In total, volunteers under my supervision have met with and interviewed over ninety parents who were separated from their children, including 52 parents who the government has identified as having relinquished their right to reunification. Many of these individuals indicated that they felt coerced into relinquishing their rights. Still others appeared totally unaware that they had done so. Indeed, some individuals were adamant that they had signed a paper that said they chose to be reunited with their children,” Aaron Reichlin-Melnick, an attorney for the American Immigration Council in Washington, D.C., said in an affidavit. He said the interviews took place between July 16 and 23 at three El Paso-area immigration detention centers.

In court on Tuesday, government lawyers said 127 parents of children ages five to seventeen had waived their rights to reunification and therefore were not eligible to have their children returned to them. That number was down from 130 in a court filing earlier Tuesday. The waiver means the parents face deportation to their home countries without their children. The affidavits filed Wednesday said lawyers spoke to at least 22 parents identified by the government as waiving reunification who say they want their children back. The government also has said that as many as 463 parents have already been deported or otherwise removed from the country without their children.

In his affidavit, Reichlin-Melnick said he met on Sunday with eight fathers at the Otero County (New Mexico) Processing Center, a privately run facility just outside El Paso. One was an indigenous Guatemalan man whose primary language is Akateko. He came to the United States with his eight-year-old daughter and they were separated sometime in May after crossing the border. “I have met with this father two times, and I believe that his Spanish is quite limited. He appears to understand very little of what is happening in his case and has expressed that he is very confused. Roughly two to three weeks ago, some immigration officials came to talk to him about his daughter. They asked him to sign a form that would allow his daughter to be released to family members in the United States. He has no idea what this paper said as he is completely illiterate, and the form was in English. Although language was a barrier when talking to him, this father was extremely clear that he wishes to be reunited with his daughter.”

Government lawyers haven’t responded in court filings to the affidavits, and the Department of Homeland Security officials didn’t immediately respond to a request for comment. ACLU attorney Lee Gelernt told Sabraw in a status conference Tuesday evening that he planned to submit affidavits to support his contention that “things were a mess on the ground” as government officials worked to meet a Thursday deadline to complete reunification of eligible families. Justice Department attorney Scott Stewart objected to that description and noted that Sabraw had praised the government’s efforts to reunify families. Stewart said he didn’t want to be “blindsided by a raft of affidavits. I think that’s quite problematic. I don’t think it’s in the spirit of your honor’s orders.” He objected to Gelernt’s plans to submit the affidavits, but Sabraw didn’t rule on his objection.

Another lawyer, Luis Cruz of New York, submitted an affidavit saying he met on Sunday at the Otero facility with five fathers who said they couldn’t read or write Spanish or English. All were on the government’s “relinquishment list,” though all five insisted they wanted to be reunited with their children, Cruz said. “Four of the fathers told me that they signed the form in a large group of other fathers in detention, many of whom described signing the form in a group of 30-50 people in a room that is used as a church at Otero. All five told me they felt intimidated when they signed this form,” Cruz wrote.

While most of the affidavits submitted on Wednesday came from attorneys, one came from a Honduran mother who is on the list of parents the government claims waived reunification with their children. The woman, known as H.G.A. in the affidavit, is 51 and said she was separated from her 17-year-old son on June 1. She says she has serious vision problems and must have documents read to her. She said she doesn’t trust U.S. government officials and refused to sign forms on three separate occasions. “I wish to be reunited with my son. He is incredibly important to me and we want to be together. This has always been my wish and continues to be so,” she wrote. 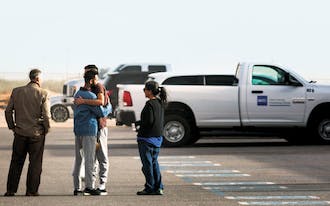