It looks as though critics of the State of Texas Assessments of Academic Readiness exam test may finally be getting some real traction after complaining into the wind since—well, since the inception of the test in 2012.

Hours after Texas Monthly reported on multiple cases of academic research indicating that the reading portion of the STAAR test was set two grade levels higher than those it was testing—third graders were being tested at a fifth-grade level, according to the research—House Public Education Committee Vice Chair Diego Bernal, D-San Antonio, called for an investigation into the test. Hearings last week by the House Committee on Education, led by Dan Huberty, were a refutation of Texas Education Agency commissioner Mike Morath’s long-held assertion that the test results are accurate. During six highly emotional hours of testimony, parents, teachers, and school district superintendents spoke to the failings of STAAR—of kids and teachers demoralized with more and more classroom time given over to “drill and kill” that mysteriously made no difference in scores. Morath and a small backup group of educators and statisticians looked at best unprepared for the onslaught, and, at worst, willfully arrogant. If there was an argument to be made for keeping the STAAR reading exam as it is, they did not appear to have one at the ready. (The closest Morath got was to admit that more teacher support was the best way to ensure student success. “Not to say I wouldn’t spend money on accountability, but investing in educators will give you huge capacity long term,” he confessed in educatorese, his language of choice.)

A few days later, on March 12, State Senator Beverly Powell announced that she had filed legislation to direct the state auditor to investigate both the STAAR and the STAAR alternate, with a completion deadline no later than July 1, 2020. “When you have a problem that is so widespread, you can’t accomplish in a hearing what you can in an in-depth study,” said Powell, a Democrat who spent years listening to STAAR reading complaints as a school board member in the Burleson Independent School District before winning election to the state senate from Tarrant County just last November. “I agree with the need to test students with a rigorous test instrument, but let’s use an instrument that’s on grade level, that has integrity, and that measures what you intend for it to measure.” Powell’s legislation may have real traction, despite the Dems’ minority in the Texas Legislature. An audit—assuming the GOP lets it happen—would allow for a rigorous and fair examination of STAAR’s accuracy by the government, and would provide actionable information that could lead to changes in the test.

Several new bills have also come before the legislature that aim to limit the testing hours and the number of tests included in the STAAR. Senator José Menéndez has even produced a bill calling for a two-year moratorium on the exam. “I think it’s universally accepted that there’s a problem there,” said Powell. No one is saying that Texas kids don’t have a reading problem—the quality of our schools bounces between 40th and 43rd in national rankings. But the STAAR may be hurting more than it’s helping. Investigating problems with the exam, said Powell, “is one of the most important issues that we’ve got to get resolved this session. How do we get school funding right if our testing instruments are wrong?” 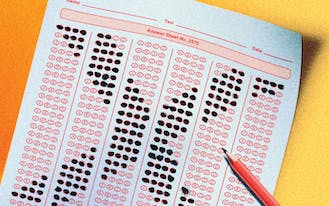 Are Texas Kids Failing? Or Are the Tests Rigged?