This is a guest columnist. The views expressed below do not reflect the opinions of Texas Monthly.

On Monday—just over a year since Mexico, Canada, and the United States officially began the NAFTA renegotiations—President Donald Trump announced the “The United States–Mexico Trade Agreement.” During an impromptu press conference in the Oval Office, Mexican and U.S. officials declared that they had finally moved beyond the thorniest issues of required auto content and Mexico’s energy sector and come to a “trade understanding.” It is undoubtedly a leap forward in the negotiations, but it might be wise to hold off on any immediate celebrations.

The most pressing challenge is now Canada’s participation. The Monday press conference had a solidly bilateral focus, with Canada almost completely absent from the festivities. Worse, when the country made an appearance, it was as part of a U.S. threat to push for separate deals. Mexico, on the other hand, sent mixed messages on Canada’s involvement. Mexican president Enrique Peña Nieto repeatedly called for Canada to be reincorporated into the negotiations, but Foreign Minister Luis Videgaray Caso simultaneously suggested that Mexico may be willing to move forward alone.

This dramatic shift in regional posture may appear to have come out of nowhere. But one likely explanation is that it is a bilateral attempt from U.S. and Mexican negotiators to pressure Canada to go along with the other two countries’ agreement—and quickly. Time is critical, particularly for the Mexican negotiators, who are hoping a to finish the agreement in the next few days. U.S. trade law requires that agreements cannot be signed and officially closed until after ninety days of their completion. This means that negotiators would have to finalize the agreement by August 31 to ensure that it is signed before Mexican president-elect Andrés Manuel López Obrador takes office on December 1. U.S. negotiators hinted at this deadline on Monday, noting that they were looking to finish the agreement by the end of the week.

The region’s negotiators may be eyeing this impending deadline, but it’s only the next step in a long process. For each North American country, there are a list of procedural steps to get the signed agreement presented and passed through the countries’ respective congresses and parliament. This means that even once a deal is completed and signed, officials in each country will be just beginning the grueling task of selling a major trade agreement to their constituents and persuading policymakers to get on board.

While this week’s press conference may have been about gaining leverage, it failed to recognize the importance of an integrated North America. Instead of highlighting the forces that tie the continent together, the event undermined regional trust and cooperation. Every day there are billions of dollars worth of goods crossing North America’s borders, and supply chains that cross all three countries. But any discussion of these ties was absent—replaced instead by a divided approach wracked with uncertainty over what comes next.

U.S. and Mexican negotiators’ breakthroughs demonstrate significant steps in the right direction. However, as the initial U.S.-Mexico euphoria wears off, Canada will need to come back to the table and focus on getting a North American agreement across the finish line. We can applaud the negotiating teams working through tough trade differences, but it’s not yet time to celebrate a new agreement—especially one that doesn’t leverage the regional strengths and successes built over the past 25 years.

Antonio Garza formerly served as U.S. Ambassador to Mexico and is now Counsel to White & Case in Mexico City. 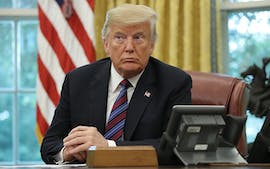 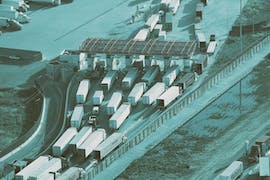 Texas Has Most to Win or Lose with NAFTA Renegotiation 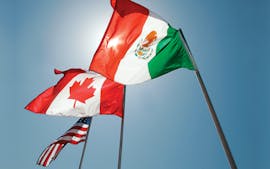 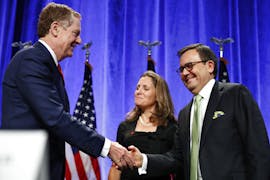