Tuesday, we’ll know just how good of a job O’Rourke did of getting Texans to the polls in the campaign’s final days. Should Texas elect its first Democrat to statewide office in 24 years, the story won’t just be Texas’s shift toward blue, but also how the pollsters—who’ve consistently shown Senator Ted Cruz ahead—missed a rising tide of Democratic turnout.

Across four episodes, pollsters, political pundits, volunteers, and small-town supporters have emerged as the stars of Underdog: Beto vs. Cruz, although the series also features Benson quizzing each of the candidates. Along the way, Benson has encountered plenty of hope and a lot of skepticism on both sides of the podcast’s (and race’s) overarching question: Can Beto change the future of Texas politics, or will Beto-mania turn out to be just another liberal fantasy?

Two episodes, the show’s fifth and sixth installments, remain of Underdog: Beto vs. Cruz: a pre-election edition today and one due later this week after the dust has settled. Friday afternoon, we turned the microphone on Benson for the latest edition of The National Podcast of Texas to discuss the big polling questions, his impression of O’Rourke after having seen quite a bit of him both on and offstage, and, most importantly, what the ramifications might be for the state (and a long-rumored O’Rourke presidential bid) should O’Rourke win, lose by a little, or lose by a wide margin.

Some highlights (edited and condensed for clarity):

There’s a lot of enthusiasm about him. His message has been different from past Democrats.  I think about this race as Beto running as Obama and Cruz running as Trump. Beto is running on a progressive policy agenda up and down. There’s no concessions that a lot of red-state Democrats make. He’s not saying, “I would have voted for Brett Kavanaugh,” or “I don’t know how I feel about abortion. Roe vs. Wade is law, but personally I’m against it.” He didn’t say any of that. He’s running like he would run in California or in New York, but then he has this kind of post-partisan message, the kind of thing that Obama had, that [more moderate] Republicans are open to.

On Beto’s Unwillingness to Play Offense

There are professional Democrats who think he could have attacked Cruz a lot more. I think there was probably like a week and a half of his campaign where he was talking about Cruz a lot. It was about from two and a half weeks ago through the second debate and for maybe a few days after. I was out with him last week. He didn’t mention Cruz once, and I asked him about it. I said, “You did this debate where you call him Lyin’ Ted. I was with you a couple of days before and you spent five minutes talking about, ‘I believe this, Senator Cruz believes that.’ And now you haven’t mentioned him once.” And he said, “Well, I’m not thinking about him right now.” And then he went back to post-partisanship and “we have to heal the divisions in our country.”

On the Impact of Shifting Demographics

The Republican Party is changing. And Trump was a big part of this, where you saw college-educated white voters, who were a traditional strong point for Republicans, leaving the party and voting for Democrats. And you saw non-college-educated white voters, especially white men, who, when the labor movement was stronger, would vote Democratic, and then in 2016 the Democrats obviously lost them. So the parties are constantly realigning, and I think we’re at a point to have even more dramatic realignment. There’s just so many factors at play—but we’re also still in Texas.

I think Cruz is a strong candidate. This is a guy who entered the Senate as a huge long shot to win the Republican primary coming out of nowhere, won the Republican primary, and sailed through the general election. He was a Republican in Texas in 2012, so it wasn’t that hard, but he also immediately made himself into a national figure. He ran for president very successfully. He is not president of the United States. He did not win the Republican nomination, but he came in second in a very, very crowded primary field with a lot of people who were favored to do much better than him. When you looked at the Republican primary field going into 2016, with Jeb Bush and Marco Rubio, you would have thought Cruz was the guy on the far right who was maybe going to win one state. He didn’t come that far from beating Donald Trump. There was talk of brokered conventions until pretty late in the primary. So he’s a very skilled politician. He’s a formidable opponent. He’s also obviously a really good target because he’s really loathed by one whole side of America. So I have no doubt that a big part of Beto’s fundraising totals and the enthusiasm about him are because he’s taking on a fight against this guy who is a huge symbol of the modern Republican Party—the kind of hard right turn of the Republican Party and of the obstructionism of the Republican Party under President Obama.

On the Possibility of Beto 2020

In this race, Ted Cruz is up and down the line a conservative Republican, so Beto just needs to be a progressive Democrat and the difference couldn’t be clearer. But there’s going to be fifteen people running for president in 2020 to take on Donald Trump from the Democratic side. When you’re on stage with all those people, how do you define yourself? How do you define yourself against Cory Booker and Kamala Harris and Bernie Sanders and Elizabeth Warren? I don’t know. And I’m confident Beto doesn’t either at this point because he hasn’t thought about it. And my assumption is that he’s not going to think about it, because I really doubt he’s going to run in 2020.

Making Sense of the Three Scenarios

Let’s just say Beto wins, right? Starts there. And he wins by 100,000 votes, a narrow victory. First of all, it’s probably the biggest political upset in modern American history … But if he wins, it’s going to be part of a wave of other surprising victories by Democrats, but his will be the most surprising. But the other statewide Democrats are all going to lose. We know that. Greg Abbott is going to be the governor of Texas next year and all of the down-ballot Democrats are also almost certainly going to lose. So how much has the state changed? Well, it [might have] elected Beto O’Rourke, a Democrat, as a U.S. senator. It still has a Republican governor. It still has a Republican state legislature. It still has a Republican lieutenant governor, and the other statewide candidates will have probably won by double digits. So it shows the possibility that a Democrat, a well-funded charismatic Democrat running in a wave year, can win in Texas, and it offers the possibility of future Democratic gains. But it doesn’t change the fact that Texas is a red state. It’s just a little less red.

If O’Rourke loses narrowly, I think we could say all of the same things. It shows that a well-funded charismatic Democrat running a great campaign can come really close to winning and that the state’s demographics are changing every year and becoming more favorable for Democrats. Unless the parties change policies or realign themselves, as long as it’s Donald Trump’s Republican Party, I think we can assume every year the state’s demographics are becoming more favorable for Democrats. And if he loses by more than people expect? I think it’ll be really depressing to Democrats and I think Republicans will rejoice and say, “See? Texas really is a fundamentally conservative state. That’s who shows up. That’s who cares enough to vote. And this shows that Texas values really are conservative values.” I think those are the three outcomes. 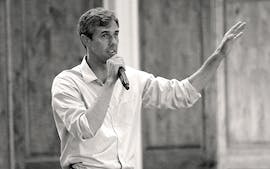 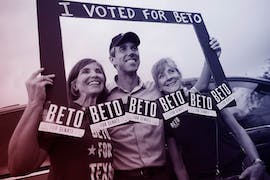 ‘Underdog: Beto vs. Cruz’ and the Final Push Before Election Day 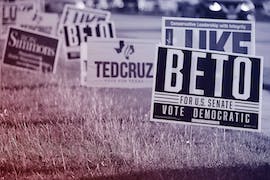