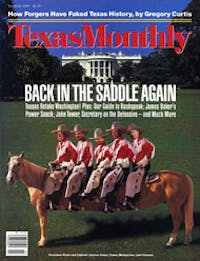 The interregnum is over; Texans have once again seized the reins of power. We have a new president with his very own rent-a-suite in Houston. The cabinet is dominated by men who, with varying degrees of authenticity, lay claim to Texas roots. There are so many powerful Texans on Capitol Hill that it’s practically like being in Austin.

The state may be bust, but these men have circulated the resumes, called on a few connections, and landed som good jobs. To them we say, “Ask not what Texas can do for you; ask what you can do for Texas.”

Twenty-five years ago, Texans hoped LBJ would lead them into the promised land. They have the same hopes for the new president, but George Bush is making no promises. by Paul Burka

In George Bush’s Cabinet, Texans are crawling out of the woodwork. Read about their pasts, their pets, their secret passions. by Emily Yoffe