In O’Rourke’s near-miss campaign against Republican senator Ted Cruz this year, Texas candidates who were endorsed by Sanders’s Our Revolution were quick to throw their support to O’Rourke once the primaries were over. And despite losing the Senate race, O’Rourke has been frequently mentioned as a potential Democratic presidential candidate. He’s yet to say what he’s going to do.

But last week, O’Rourke edged out Bernie Sanders and former Vice President Joe Biden in a survey of progressives by MoveOn.org.  As reported by NBC News:

The most popular potential candidate was O’Rourke, D-Texas, who was selected by 15.6 percent of respondents, followed by Biden at 14.9 percent, and then Sen. Bernie Sanders, I-Vt., with 13.1 percent.

It’s another sign of O’Rourke’s surprising popularity among national Democrats and a potentially troubling indication for Sanders, whom MoveOn endorsed in the 2016 Democratic primary. That year, 78 percent of MoveOn members voted to back Sanders over Hillary Clinton.

Sanders reacted by saying, “I think it is a little bit premature. We’ve got a little bit of time left before that.” A hashtag has popped up on Twitter called #NeverBeto, and it is difficult to know whether it is being shared by a few disgruntled Sanders supporters or is a sign of something bigger. But Melissa Byrne, a digital director for Sanders’s 2016 campaign, told BuzzFeed last week, “All we’re saying is, can we pause? Can we have a primary? Or can we look under the hood a little bit before saying he’s the choice?”

Closer to home, Dan Derozier, chair of Houston’s Democratic Socialists of America’s Electoral Committee, penned an op-ed for the Houston Chronicle criticizing O’Rourke for mostly running on vague—if uplifting—rhetoric in his challenge to Cruz. Derozier described it as being much like feel-good talk from former President Barack Obama.

The trouble begins with his campaign message. Consider this tweet, which set the tone for his statewide campaign: “We’re not running against anyone, any party, or anything. We’re running for Texas, for this country, for the big, bold, ambitious work we want to accomplish together.”

O’Rourke’s message covers rhetorical territory familiar from the Obama era: It’s positive and innocuous, but noncommittal. It relies on lofty but meaningless phraseology like Shared Values, Finding Common Ground and Bringing People Together. The message describes itself with words like “ambitious” and “bold,” but doesn’t promote any specific policy that could actually be described as such.

Rhetorical specifics were few, indeed, with O’Rourke’s campaign this year. He talked about everyone having a right to health care, for instance, and then dodged the question of how to provide it—except to say he did not support Sanders’s Medicare for All proposal. In 2017, O’Rourke talked about optional Medicare for all, but by this year’s election he was offering up a more vague “universal, guaranteed, high-quality health care for all.” As described on his campaign website, “Achieving universal healthcare coverage—whether it be through a single payer system, a dual system, or otherwise—so that we can ensure everyone is able to see a provider when it will do the most good and will deliver healthcare in the most affordable, effective way possible.”

But, hey, when you’re a Democrat running against Ted Cruz, that was enough for his supporters.

Just being the Not-Ted-Cruz candidate will not work in a 2020 Democratic presidential primary against people like Sanders, Elizabeth Warren, Joe Biden, or fellow Texan Julián Castro. O’Rourke will have to give specifics. And this could easily turn into a repeat of the Sanders/Clinton contest. Sanders supporters said Clinton was not sufficiently progressive, and Democrats claimed Sanders and his supporters were not true Democrats.

The afterglow of Betomania may be about to fade as it slams into the Berniecrats.

This post has been updated to correct Melissa Byrne’s title with the Bernie Sanders presidential campaign. 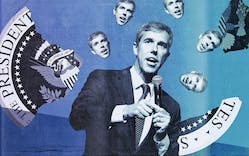