Jim Lehrer, the longtime PBS news anchor and Texan, died Thursday at his home in Washington, D.C., at the age of 85. Lehrer spent much of his childhood in Beaumont and San Antonio, and his journalism career began in Dallas, where he was a newspaper reporter and an editor throughout the sixties. In 1970, he made the jump to television at PBS station KERA in Dallas, where he created a much-lauded local nightly newscast, Newsroom. After moving to Washington, he first teamed up with Robert MacNeil to anchor PBS’s coverage of the Senate Watergate hearings. By 1983, their partnership had evolved into an hour-long nightly national news program, with which Lehrer remained until retiring in 2011. He also moderated twelve presidential debates and authored more than twenty novels, three memoirs, and several plays. Texas Monthly‘s Jason Heid asked TCU graduate and former CBS News anchor Bob Schieffer how he’ll remember his friend.

On how we met: I got to know Jim when I worked at the Fort Worth Star-Telegram, and he worked in Dallas. He was with the Dallas Morning News for a couple of years, and then he went to the Times-Herald. We both covered the Kennedy assassination together. I believe it was somewhere around that time that we met. Then, when he came to Washington, we would kind of travel in the same circles once he got up here. So he and Kate, his wife—who is a graduate of TCU, by the way—they’ve been friends of ours for all these years.

On his role in journalism: He was a role model for all of us in journalism. He was so ethical. He was so determined to be objective, and he’d get both sides of the story. That’s probably rarer in journalism than we would like for it to be. He thought viewers ought to be allowed to make up their own mind about what they thought about things. Sometimes he would actually get criticized by some in the media who thought he was just going easy on people, but that was not the case. He wasn’t. He asked hard questions, and he asked easy questions, but he wanted the person that he was interviewing to be the person that people focused on. He didn’t want to be the star of the interview. Jim was the antithesis of a showboat. When you’re in journalism, you know who does their own work, you know who doesn’t. You know who’s going to take the cheap shot, you know who’s not. And you know it pretty quick. Well, Jim was a guy who stood for all the right stuff, and he didn’t just stand for it—that’s how he practiced his craft.

I’ve often wondered why so many national TV news anchors started out in Texas. Somebody said to me one time it’s because back in the days of the Old West, when cowboys were out there all by themselves and they had nothing to do, they made up stories and told them, most of which were not true. Maybe all of us have some of that in our DNA—not making up stories, but the fact that we love to tell stories. Maybe that had something to do with it.

He was also very smart. He went into every interview having done a tremendous amount of research. The first time I did one of the presidential debates—and you know he did a dozen of them—when they asked me to do it, he was the first person I called. I asked him, “How do I go about this?” and he said, “Get more questions than you’ll ever ask,” and that was really good advice. I went into it with three hundred questions, and I bet I asked twelve or fourteen. That was the lesson I learned from Jim, and I’m glad he taught me that. He never took any shortcuts. He just loved the news. He got a big kick out of doing it. He loved to tell stories, like we all do, about the adventures we had being reporters. Most of them probably weren’t as funny as we both thought they were at the time.

I think his greatest impact was in the presidential debates. He kind of set the tone for those debates. He brought great credibility to it. He was very objective, and his integrity showed through. People sometimes accused him of being kind of boring or something, and he would say, “If you want to be entertained, go to the circus. That’s not what we do around here.” Jim thought people turned on the news because they thought they were going to find out something they needed to know. He had great respect for his viewers, and I think that’s really the secret for all great journalists.

On his fiction-writing: The other thing about him was that he wrote fiction like the rest of us breathe. I mean, when you see Jim on an airplane and he’s got his computer there on the little table in front, he’s working on a novel. I’ve never seen anybody that wrote as much as he did. Whenever he wasn’t getting ready to do his broadcasts, he was working on a novel, and he loved that as much as he loves the news. I was always very jealous of him. I’ve written five books, but they’re all nonfiction. Every time I’ve tried to write fiction, I just never was very good at it. But he would just have these stories that they just seemed to come to him every ten minutes. It was just a wonder to behold that he could do his regular work and still have time for fiction. And I’ll tell you something else about him that I always admired: He took a nap every afternoon. I always was trying to figure out how I could do that, but I never could. I thought he was wise to do it.

On who he was as a person: He’s just a great guy. He’s fun to be around. When you saw Jim, you always wanted to stop and talk, see what he had on his mind. He was very open and very nice to people who would see him on the news and would come up to him. He treated them with respect, as he should have. I was often asked, “What’s Walter Cronkite like?” And I would always say, “He’s exactly the way you would want him to be,” because he’s exactly how he is on television. Jim was that way too. In having dinner or chatting around the newsroom, he was just the way he was on television. That’s why people respected him so much.

After TCU named its journalism school after me, we started this thing called Schieffer Symposium, and every year I’d get journalists from the national media to come down, and we’d just sit there and talk about the news. It became very popular. It was always a sell-out crowd. The first one we had, we had Jim, Bob Woodward, myself, Tom Brokaw, and Jim’s wife, Kate. We all had a great time. These things became kind of a tradition where we’d do this, and we’d all go out to Joe T. Garcia’s and have Mexican food. But Jim was the first person I asked to be part of that. I knew I could lean on him.

The Lehrers always had a Christmas party at their house in Washington, where they’d have Texas chili. (One thing I always held against him was they didn’t put beans in their chili.) Anyway, the party would be a big thing. Everybody would be there—politicians, but mostly journalists. They didn’t have it last Christmas, and I wondered if maybe there might be some reason for that.

You know these people that always feel put upon, or they’re being overworked and all that kind of stuff, you never heard that from Jim Lehrer. He was just glad to be there and glad to be in the middle of everything. He sometimes was a calming voice when everybody else was screaming and hollering. I think we’re going to miss him. I mean, I think we miss him already.

Who won the debate? 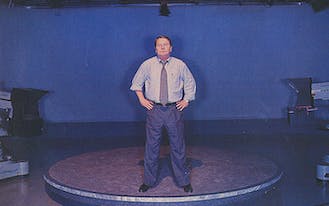 The News About Jim Lehrer